Unity, Growth & Love in the Church 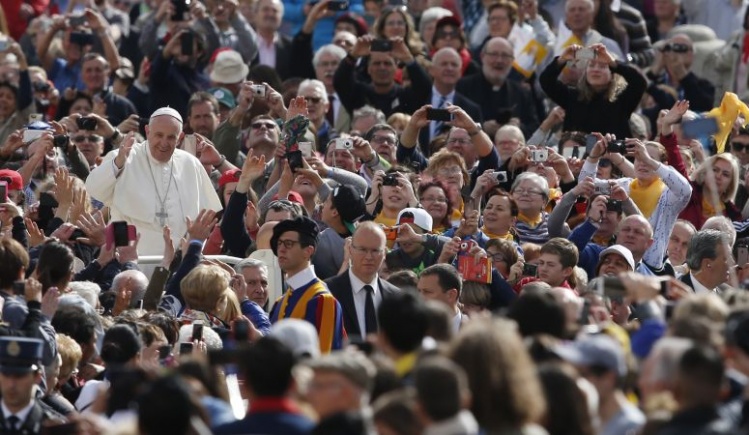 No doubt Pope Francis anticipated that within hours of issuing Amoris Laetitia, battle lines would be forming—once again. Nonetheless, this “apostolic exhortation” is a valiant and powerful exercise in the Petrine ministry of upholding church unity. Francis achieves this in the deft summation and synthesis of the two synods on the family and in the counterbalancing of two chapters. He describes one as setting forth “some essential aspects of the church’s teaching on marriage and the family” and the other as “the pastoral discernment of those situations that fall short of what the Lord demands of us.”

This is a balancing act conservative critics have been quick to reject. The pope, they complain, has tried to embrace the key concerns of both of the major contending parties at the synods—and the result is an inadequate, inconsistent, or incoherent document that weakens church unity. What these critics miss is that Francis is asking us to enlarge our very understanding of that unity. “Not all discussions of doctrinal, moral, or pastoral issues need to be settled by interventions of the magisterium,” he writes in the document’s third paragraph. “Unity of teaching and practice is certainly necessary in the church, but this does not preclude various ways of interpreting some aspects of that teaching or drawing certain consequences from it. This will always be the case as the Spirit guides us towards the entire truth (cf. Jn 16:13), until he leads us fully into the mystery of Christ and enables us to see all things as he does.”

Does this statement, from the third paragraph of the document, really break new ground? It is, after all, carefully framed in negatives (“Not all discussions … this does not preclude…”); and no one would deny that conflicts and variations have always marked Catholic life. Yet the assumption has become widespread that if these are of any seriousness they are, at most, temporary anomalies awaiting magisterial rulings. Francis is suggesting that they may be a permanent, and valuable, character of Catholicism’s journey to the fullness of truth. It is a suggestion with deep implications for Catholic identity.

Like others, I was disappointed in some aspects of Amoris Laetitia. One was its treatment of contraception. Whatever one’s view of the church’s virtually absolute condemnation of contraception, its repeated reaffirmation at the highest levels of church authority alongside its massive rejection by Catholic couples, many of them at great personal sacrifice “open to life,” has for decades seriously undermined the credibility of church teaching, especially in regard to sexuality and marriage. The non-reception of papal teaching on contraception has introduced toxic patterns of dissemblance at every level of church life. I was astonished at the 2014 synod’s perfunctory glance at the question and hoped for better from the 2015 gathering and from Pope Francis. I did not expect some definitive resolution, merely an acknowledgment of the problem that was honest and not self-satisfied and favorably disposed to renewed discussion down the road.

What I found instead was a single passage that seems to reaffirm the condemnation at what I consider its weakest point, namely that “no genital act of husband and wife can refuse this meaning,” i.e., being open to procreation [my emphasis]. Pope Francis is surely aware of the chasm that this teaching has opened between devout Catholics, including clergy and theologians, and church authority and of its cost to the church. I can only conclude that Francis has decided not to stir any further controversy but to let the matter take its own course, even if that course risks a festering wound or tolerating a poison in the bloodstream that eventually damages the church’s nervous system and brain cells.

Perhaps this is the prudent choice. Or perhaps it is a lost opportunity. My disappointment was probably like that of same-sex couples who were too well-schooled to expect any dramatic change in the church’s view of their relationships but nonetheless hoped for more than a brusque reiteration of the synod’s insistence that “there are absolutely no grounds for considering homosexual unions to be in any way similar or even remotely analogous to God’s plan for marriage and family.” (My emphases.)

I was still feeling the sting of disappointment when I began to read, a half-dozen pages later, Francis’s chapter on “Love in Marriage.” Departing from the synods’ reports, he embarks on an eloquent reflection on 1 Cor 13:4-7. “Love is patient, love is kind ….”  Only a few days had passed since my parish’s English-speaking RCIA group had met to discuss the sacrament of matrimony. Now, I thought, if only we had this chapter, perhaps supplemented by the exhortation’s final chapter on “The Spirituality of Marriage and the Family,” published as a separate booklet to hand out! A few hours later I discovered that Fr. Tom Reese, SJ, had already sent out an NCR analysis with this suggestion.

Given my disappointed state, however, it was important to recall that this passage from Paul, so favored for nuptial Masses, was not written with marriage in mind but rather in regard to unity and division in the church. Distressed as I was by Pope Francis’s strategy of avoidance regarding contraception, love of the church called me to be patient and kind, not arrogant, rude, boastful, or insistent on my way, not irritable or resentful but generous, forgiving, rejoicing in the right, and bearing, believing, hoping, and enduring all things. In Francis’s eyes, I am confident, the reverse is no less true: the church should exhibit all these traits toward each of its members. There are many profound observations in Francis’s lyrical exhortation for spouses demanding application to the Body and its members, whether in the pews or the pulpits, whether in print or papal offices.

Chapter 8, on “Accompanying, Discerning, and Integrating Weakness,” addresses the church’s response to the “irregular” situations that dominated media attention during the synods, primarily divorced and remarried Catholic couples seeking to receive Communion and, secondarily, cohabitating couples in relationships with many of the characteristics of marriage. The plight of the divorced and remarried is a very legitimate pastoral concern, but why, I have wondered, did it become so all-consuming? The numbers of those who have not long since made their own conscientious decision about church participation and reception of Communion pale, in my opinion, next to the scores of millions of families shattered by war, broken by deprivation, or entrapped in refugee camps—or of young adults permanently alienated from their faith by accurate or inaccurate views of Catholic teachings on sexuality.

But so be it. Chapter 8 is a greatly needed examination of how those of us striving to be formed by the words and deeds of Jesus should relate general laws to particular cases. In many ways, the chapter articulates at a deep level what many loving Christians intuitively do in their own families and circles of close friends.

I have one caveat about the theme of mercy, so prominent in the exhortation and this jubilee year, so beautifully preached by Francis. It is hard to say this, but the availability of mercy can be a tool of the powerful, an excuse for not reforming unjust laws or harsh practices, an alibi for skirting uncomfortable questions, a sop for those injured, a safety valve for discontent. Granting mercy can be an exercise in domination, a means for officeholders to demonstrate their power. This is not the mercy of God, not the mercy of love. Nothing, I think, could be further from what Pope Francis has in mind. But it remains a temptation for institutions and institutional authorities.

Where do we go from here? Amoris Laetitia confirms the synod process as “both impressive and illuminating … a multifaceted gem reflecting many legitimate concerns and honest questions.” Elsewhere, the pope has affirmed “synodality” in even stronger terms as essential to the church. I hope that implies, as Fr. Antonio Spadaro was quoted as saying, “The apostolic exhortation was not just the last step of a long process.” Spadaro, the editor of Civilta Cattolica, had conducted the remarkable interview in which the newly elected Francis spoke boldly about the church’s growth in understanding of the truth. I hope that the Jesuit editor is correct when he says of Amoris Laetitia, “It is going to be another starting point.”