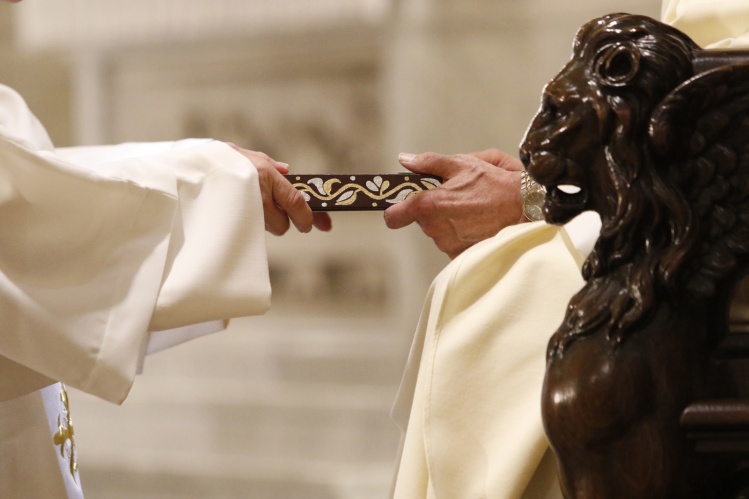 Bishop Nicholas DiMarzio of Brooklyn, N.Y., presents the Book of the Gospels to a new deacon during the ordination of deacons at St. Joseph Co-Cathedral in Brooklyn May 25, 2019. (CNS photo/Gregory A. Shemitz)

Any deacon would wince at Pope Francis’s comment that deacons around the altar can look like “second-class priests.” But there is, alas, some reason for people to perceive us that way. Over the same fifty years in which the number of deacons in the United States grew from zero to more than 18,000, the number of priests declined by just about that same amount. Because of that, whatever the original plan for the diaconate may have been, deacons have inevitably been drawn into many of the parish and sacramental roles formerly filled by a now-nonexistent class of assisting priests. If we are seen so often around the altar—preaching, doing baptisms, leading communion services—it’s because the work needs to get done, and there’s no one else to do it.

I know that’s very much what happened to me. Whether I planned it or not (and in many ways I did not), my work as a deacon these past twenty-five years has been very parish-centered, and perhaps I do look a little like a second-class priest. But Sunday preaching, baptizing, marriages, and teaching are rewarding work, and the need for it has only increased—and so, I quickly found that the time I could devote to ministry was entirely devoted to those tasks. To be sure, the diaconate attracts some men who like the idea of being an almost-parish-priest, men who seem to love their title and the gray Roman collars that some dioceses encourage deacons to wear. But these are the exceptions. Most deacons simply want to help the church in whatever way turns out to be most needed, and often, that has meant stepping in to fill the gaps created by the decline of the priesthood.

As Christopher Ruddy points out, too many people (the pope included, apparently) still define the diaconate as an ordained “minister of charity.” Yet the original vision of the diaconate, implied by the word diakonia, was more wide-ranging, and it has yet to be fully realized. If we thought that deacons might become “ambassadors” and “go-betweens” working the territory in between the church and the world, we’re still waiting to see it. I, for one, have always hoped deacons could be seen more as ordained field representatives of the church, working in innovative settings and ministries impossible for most priests to be a part of. Yet the adaptability of the diaconate to whatever pastoral challenges the church faces is still mostly unexploited.

Deeply symbolic and theological language about both the priesthood and the diaconate sometimes ends up stifling creative thinking about their futures.
sharetweet

Why is this? Part of it, I fear, is that there is too much diaconate theory and not enough pastoral imagination. Ruddy’s article is in some ways an example: as with most conversations about the diaconate, it’s more about what it might be theologically and what it once was historically than about what the church now needs it to be. Deeply symbolic and theological language about both the priesthood and the diaconate sometimes ends up stifling creative thinking about their futures.

There’s another reason too, of course: the parish system in which most deacons now function provides a command-and-control structure that everyone understands. Despite the fact that, officially, deacons are ordained for service to the bishop, in practice deacons report to parish priests who oversee their work; parish priests report to bishops. New forms and settings for ministry often don’t fit well into this traditional arrangement.

But an alternative future isn’t unthinkable. The growth of the diaconate since its revival fifty years ago is already, on the surface anyway, a sign of great health and life. Yet the vast majority of deacons in the United States today are in their sixties and seventies. Can anyone picture the energy that would be released by another 18,000 or 36,000 deacons, many of them younger, many of them women, half of them of Hispanic and Asian heritage, asked by their bishops to open up new ways and places for people to encounter Christ?

For this to happen, some of our bishops would have to feel a little more entrepreneurial, of course, and diaconate assignments would become more creative and perhaps less parish-centric. Recruitment efforts would have to reach beyond the usual suspects. Formation programs would have to become less academic, more pastoral, and offer schedules tailored to the younger working men and women you might want to see attending them.

With the right conditions, it could happen. There is, in a way, a tradition of deacons going off the reservation. Most scholars now agree that the seven men appointed to manage the daily distribution of food in the Acts of the Apostles shouldn’t be regarded as the first deacons, although that tradition lives on in deacon lore. What I have always liked about those seven is how quickly their “minister of charity” job description went out the window once the Holy Spirit and the needs of the world took over the process. Almost immediately after his appointment, for example, Stephen is not doing parish work but bringing “signs and wonders” to the community, while Philip is preaching miles away in Samaria to an Ethiopian eunuch, among others. I would love to see a second fifty years of the revived diaconate that has some of the creativity—and disregard for traditional job descriptions—of those first seven.

Please email comments to [email protected]commonwealmagazine.org and join the conversation on our Facebook page.