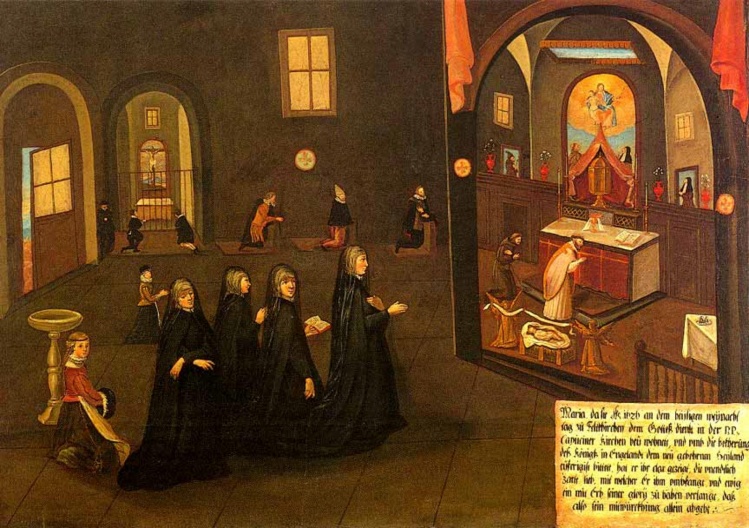 In the Papal Bull of 1631, Pastoralis romani pontifices, Urban VIII declared that

In order to contain such great audacity with more strictness and so that these plants that are so harmful to the Church of God might not extend further, we have decreed that they be torn up by their roots…. We decide and decree, with Apostolic authority, that the life style and statutes of the congregation of women and virgins of the so-called ‘Jesuits’ are null and void from the very beginning and without any power and value. And in order to bring this about, with this same authority, we suppress and extinguish them in their roots, completely; we abolish them perpetually and abrogate them. And, in order that all the faithful consider them suppressed, we completely divest those of the aforementioned Congregation or Sect who held offices and responsibilities and we order, in virtue of holy obedience and, under pain of excommunication, that these persons live separately from one another, outside of the colleges and houses where they have lived until now.

Who was responsible for the monstrosity Urban condemned in such harsh terms?

Mary Ward was born on January 23, 1585, into a respected aristocratic Yorkshire family. This was during the reign of Queen Elizabeth I, when English Catholics were driven into hiding, persecuted, often martyred. Two of Ward’s uncles had been implicated in the famous Gunpowder Plot—an attempted assassination of James I. In 1599, the family home was burnt to the ground by rioting mobs. Mary and her two sisters were rescued by their father and Mary was sent to the house of Sir Ralph Babthom at Osgodby-Selby. It was there that, at the age of fifteen, she first felt the call of a religious vocation. She entered the monastery of the Poor Clares at Saint-Omer in northern France. She was later sent as a lay sister to the Spanish Netherlands.

Ward’s ambition was to return to England, where monasteries had been abolished, priests were not tolerated, and lay Catholics lived under constant suspicion. In 1606, she founded a monastery specifically for English women at Saint-Omer in northern France. The community’s rule was very liberal, well adapted to the needs of Catholics in England. It provided both structure and flexibility. The “English Ladies,” as her nuns were called, would not wear a habit or live in a cloister, and they would dedicate themselves to the education of Catholic children and to supporting the local Catholic population in whatever way they could. Mary was, in fact, inspired in all this by the recently established Society of Jesus, and was in contact with Ignatius of Loyola. Members of her new community were even disparagingly called the “Jesuitesses” in some circles. Like the Society of Jesus, Mary hoped her community would not depend on the local bishop but directly on the pope.

Ward’s “rule” was, to say the least, controversial. It went against the statutes that the Council of Trent had established for women’s religious congregations. These required that women religious live cloistered lives, wear a religious habit, pray the Divine Office, and submit to the local bishop. The idea of giving women some of the same apostolic responsibilities that belonged to the male clergy was seen as a radical departure from tradition. So was the proposal that the “English Ladies” be self-governing. In brief, the Ladies were proposing a new form of religious life that threatened male supremacy.

Even some Jesuits opposed Ward, on the grounds that St. Ignatius had never wanted to establish a Society of Jesus for women.
sharetweet

Not all the popes were as opposed to Ward as Urban VIII was. In fact, Popes Paul V and Gregory XV, Urban’s predecessors, had both supported her. Even Pope Urban was not quite as hostile toward Ward as the strong language of his 1631 bull might suggest (that was the conventional style of bulls back then). After the promulgation of Pastoralis romani pontifices, Ward was imprisoned in Munich, in the convent of the Poor Clares. She was accused by the Inquisition of being a heretic and a schismatic (charges also leveled at Joan of Arc). When Urban learned of this, he ordered Ward’s release and summoned her to Rome. There, the same pope who had suppressed Ward’s order in northern France allowed her to open a new house for her community. She was not, however, allowed to leave the city until she was near the end of her life, nor was she to be recognized as the founder of her community. The ensuing events are hard to follow because, after the suppression, efforts were made to destroy all the related documents.

The times were, in fact, exceptional and rapidly changing. The antagonism between the English throne and the Catholic Church was aggravated by the papal excommunication of Queen Elizabeth and the release of her Catholic subjects from any oath of fidelity they might have made to her. In response, Elizabeth ratcheted up the persecution of English Catholics, who were suspected of plotting the overthrow of the queen. The Catholic Church in England was reduced to a mainly clandestine existence.

Ward, who had done all that she could to preserve what was left of the Catholic Church of England, obeyed the orders of Urban VIII without protesting and accepted the dissolution of her communities, whose members either returned to their families or entered recognized religious institutions. Under the patronage of the local nobility, some members of her “institute” in the Catholic countries of the mainland continued their work of education for Catholic girls and outreach to the marginalized. They lived in “companionship and discernment,” without the benefit of a religious rule and without being recognized as a “religious order.” In 1637, Mary was finally allowed to return to England where houses were established in London and Heworth, near York. The latter was the first convent to be founded in England since the dissolution of the monasteries in 1536. Ward would remain there, an apparent failure, until her death in 1645.

Throughout her life, Mary gave proofs of utmost fidelity to the Catholic Church and to the pope, even when he attempted to eradicate all she was striving to do. She was opposed by a group of clerics who were obsessed with the niceties of canon law, as well as by those who were hostile to the innovations of the Jesuits. Even some Jesuits opposed her, on the grounds that St. Ignatius had never wanted to establish a Society of Jesus for women. Finally, Ward had to contend with all those who thought it “unnatural” for women to abandon the tasks ordinarily associated with their sex.

After her death, Ward’s companions carried on her work. Even though the institute had been officially suppressed and therefore had no official status as a religious congregation, they found ways of keeping it alive. It wasn’t until 1703 that Pope Clement XI approved a “rule” for the community. Pius IX subsequently recognized it as a religious institute. Today the Sisters of the Institute of the Blessed Virgin Mary (or the Sisters of Loreto—so called because of Mary’s devotion to the Holy House of Loreto) number about seven hundred and are dispersed throughout the world. In addition to teaching children, the sisters have literacy programs for adults, give spiritual direction and counseling, provide shelters for the homeless, and participate in movements for greater justice in the world. The rule they were finally allowed to adopt included the wearing of the habit, but it also tried to incorporate the spirit of Ward’s intuitions.

In 1951, Pius XII referred to Mary Ward as “an incomparable woman”; John Paul II spoke of her as “a pilgrim of hope.” She was declared Venerable by Pope Benedict XVI in 2009. Ward’s trajectory seems to demonstrate an axiom in church history: it is often those who suffer humbly and patiently from the church’s contradictions who end up redeeming it, and sometimes also reforming it. Through her obedience and fidelity both to the church and to her own intuitions, Ward ultimately brought about a radical change, opening new possibilities for women in the church.