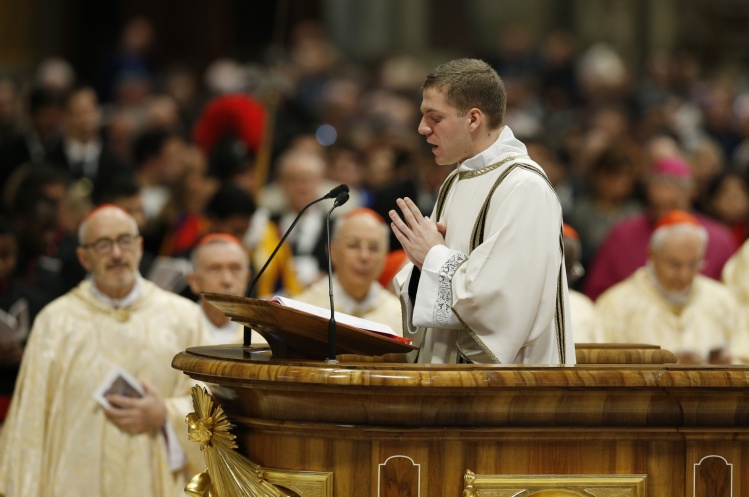 Deacon Anthony Klein of the Diocese of Sioux Falls, S.D., during Mass for the feast of the Epiphany celebrated by Pope Francis in St. Peter’s Basilica, Vatican, January 6, 2020. (CNS photo/Paul Haring)

Pope Francis can turn a phrase. Speaking recently to the Vatican’s Dicastery for Laity, Family, and Life, he said, “Move deacons away from the altar…. They are guardians of service, not first-class altar boys or second-class priests.” With characteristic bluntness, Francis put his finger on the still-unresolved identity and mission of deacons in Roman Catholicism.

In one sense, the pope’s words run counter to Vatican II’s teaching that those men who already carry out diaconal-type ministries—catechesis, pastoral leadership, charitable service—should be ordained, so that “they would be more closely bound to the altar and their ministry made more fruitful through the sacramental grace of the diaconate” (Decree on the Church’s Missionary Activity, 16).

In another sense, Francis’s words represent a widely held view that the diaconate is about service, especially the humble service exemplified in foot-washing (although only bishops and priests wash feet on Holy Thursday). Today, in an effort to see deacons as something other than “first-class altar boys or second-class priests,” and also to avoid what some see as a too “churchy” or introverted view of ordained ministry, the diaconate often gets defined primarily as a ministry of service, especially of charity and justice—sometimes with subtle and not-so-subtle warnings against focusing too much on the ministries of word and sacrament.

The Greek diakonos is something quite different from a humble servant who washes feet or buses tables.
sharetweet

However, the Australian Catholic exegete (and inactive priest) John N. Collins has argued, in numerous books and articles, that the Greek diakonos, as it is used in both classical and early Christian writings, is something quite different from a humble servant who washes feet or buses tables. It refers to an ambassador or an intermediary who is commissioned by a superior authority to proclaim a message or perform a deed. The deacon’s service is thus directed primarily toward his bishop, not to the needy. At his ordination, a deacon receives the Book of the Gospel from his bishop—“the Gospel of Christ, whose herald you have become.” This is a sign of his office. The nature of this office is also reflected in art that depicts angels vested in dalmatics (the outer vestment proper to the deacon, just as the chasuble is proper to the priest): an angel is a messenger sent by God. And, certainly, St. Paul’s reflections on the origin and nature of his apostolic ministry make clear this divine commissioning; even as he pours out his life ministering to his people, he is above all a “slave of Jesus Christ, called to be an apostle, set apart for the gospel of God” (Romans 1:1).

Collins argues that the “humble service” interpretation of the diaconate grew out of nineteenth-century German Lutheran charitable activities and later passed mistakenly into German Protestant and then Catholic biblical scholarship, where it influenced Vatican II and Catholic theologians (e.g., Yves Congar and Thomas O’Meara). It has since become the dominant interpretation of diakonia and “ministry” in both Catholic and Protestant circles: “diakonia = ministry = (humble) service.”

Vatican II’s Lumen gentium contributed to this overly narrow interpretation by, in effect, equating ministry with humble service and by saying that deacons “receive the imposition of hands ‘not for priesthood, but for the ministry [or ‘service’]’” (Lumen gentium, 29), while leaving out the last part of that internal quote: “of the bishop.”

This interpretation contributes to a deformation of diaconal identity and a breakdown of the necessary interdependence of his ministries of liturgy, word, and charity-service. The deacon’s rightful and necessary place is at the altar, in the pulpit, and in the street. Much English-language writing on the diaconate, though, remains wedded to the “humble service” view. (The work of Deacon James Keating of the Institute for Priestly Formation in Omaha is a notable exception. So is the work of Bishop Shawn McKnight of Jefferson City, Missouri, and Boston College theologian Richard Gaillardetz.)

It is important, then, that we recover a sense of the deacon as a herald—which is why he is the ordinary minister of the Gospel at Mass—who serves the bishop and is sent by him to proclaim the word in various ways and places. Not coincidentally, the early second-century Ignatius of Antioch says that the bishop is the image or icon of the Father, and that the deacon represents Jesus Christ, the Son who is sent by his Father to do the Father’s will. To put it provocatively, the deacon is not an ordained social worker.

Likewise, the church’s own diakonia must not be reduced to humble service, but is fundamentally evangelical and apostolic. What Collins puckishly calls the modern “Latter-Day Servant Church” grew out of a laudable desire for a more humble, reforming, engaged, and egalitarian church. Avery Dulles’s Models of the Church argues, though, that the “Church as Servant” model has little direct scriptural foundation and “goes astray” when it opposes itself to a more kerygmatic model.

The deacon’s rightful and necessary place is at the altar, in the pulpit, and in the street.
sharetweet

My point is not that the church—and its deacons—should not serve humbly, but that its first (though not only) service to the world is to proclaim the Gospel to all creatures. Both Vatican II and the Council of Trent, for instance, affirm that evangelization is the preeminent task of the bishop.

And although both the “humble service” proponents and Collins himself tend to underemphasize or overlook it, the diaconate is also fundamentally a liturgical ministry. Even the revised postconciliar ordination rites, which greatly reduce those prayers’ cultic language and imagery, still liken deacons to the ancient Levites, who served the priests in the Jerusalem Temple. The deacon similarly serves his bishop at the altar. One sees a remnant of this understanding in the two deacons who flank the bishop—even the Bishop of Rome—at more solemn Masses. The diaconate, in its fullness, reveals that the church’s outreach to the poor and marginalized is rooted and catalyzed most deeply in the liturgy, where the Word is proclaimed and the Sacrifice offered.

Precisely in this sense, when the deacon is “joined more closely to the altar,” his (and the church’s) ministries of evangelization and service come alive. After all, it is the deacon who gets the last word at Mass, dismissing the congregation to go forth to “announce the Gospel of the Lord” and to “glorify the Lord by your life.”

Christopher Ruddy is associate professor of systematic theology at the Catholic University of America.