A Sense of Mission

What Francis Said, and What He Wants to Do
By John Wilkins
Pope Francis
Religious Life
Spirituality
Theology
Vatican II
Web Exclusive
Women in the Church 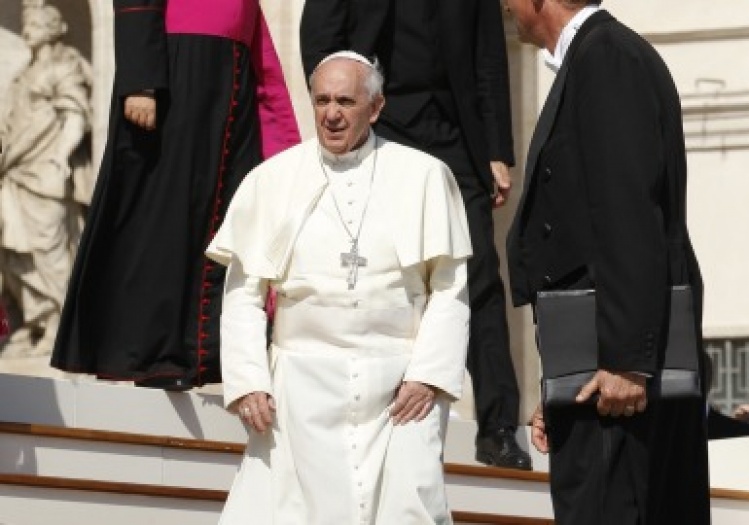 He’s happy as Pope. The Jesuits used to say: He never smiles. Now he smiles all the time. The papacy satisfies the sense of mission he has always had and which caused him to join the Jesuits in the first place.

He’s an evangelical. No wonder he gets on so well with the Archbishop of Canterbury who comes from the Holy Trinity Brompton stable. The Catholic Church under John Paul II and Benedict XVI has been calling for “a new evangelization” without it being clear that anyone knew what that would really involve. Now we know. “Who are you?” the interviewer asks him. “I’m a sinner.” As he has said elsewhere, “The privileged locus of the encounter with the Lord is the caress of the mercy of Jesus Christ on my sin.” And, “For me, feeling that you have sinned is one of the most beautiful things that can happen to a person…. Sin properly assumed is the privileged place of personally finding Jesus Christ our Savior…. It is the possibility to live the wonder of having been saved.” Amazing. It struck me personally. No Anglican evangelical preacher could better that.

His interview confirms Paul Vallely’s thesis in his book Pope Francis, Untying of Knots that Bergoglio had a conversion. As Jesuit Provincial, he admits in the interview, he was too authoritarian. “I was never a right-winger,” he says--but he surely was. Never a right-winger when he was a spiritual adviser to the Peronist Iron Guard and turned over the Jesuit university in Buenos Aires to them? During his subsequent period in Cordova, he “lived a life of great interior crisis,” he recalls. So when he became Archbishop of Buenos Aires, he governed in a quite different way. Ditto as Pope.

His mission is to breathe spirit back into Catholicism. He and Benedict XVI are both agreed that Christian morality as presently experienced and stated is seen as the faith’s weak spot. “The decisive reason for the abandonment of Christianity,” declared Joseph Ratzinger in 2004, the year before he became Pope, is that “its model for life is apparently unconvincing. It seems to place too many restraints on humankind that stifle its joie de vivre, that limit its precious freedom, and that do not lead it to open pastures but rather into want, into deprivation.”

Francis as usual is direct. “We have to find a new balance; otherwise even the moral edifice of the Church is likely to fall like a house of cards.”

But his proposed solution is diametrically opposite to that of Benedict. For the latter, only creative Christian minorities, well instructed in their faith and traditionalist in orthodoxy, could do the job. The one fruit of the Second Vatican Council to which he gave unstinting praise was the new movements. Here were his creative minorities.

Pope Francis bursts out of the box. “This Church… is the home of all, not a small chapel that can hold only a small group of selected people…. Instead of being just a Church that welcomes and receives by keeping the doors open, let us try also to be a Church that finds new roads, that is able to step outside itself and go to those who do not attend Mass, to those who have quit or are indifferent.”

He constantly uses the image of “the People of God.” Indeed, he says that this is his preferred choice. There is another reversal here. Rome thought this image, the favorite also of Vatican II, was too “democratic,” and in the stage-managed synod of bishops of 1985, it was decreed it should be put on the shelf. No longer.

All this so far is about style. It must be significant that he singles out John XXIII for mention. One recalls Hans Kung’s exclamation at that time: “A Pope who’s a Christian. That’s the sensation!” Francis even looks a bit like John--the same huge head, something of the same expression.

The style is the man and the style is the Church. He wants to end the cultural wars that have so disfigured Christian discourse and practice (including the appointment of bishops). Neither right nor left (to use journalistic shorthand terms--we know what they mean) are happy. Each wing sees its nostrums being bypassed. Colorful illustrations abound on the blogs of both sides.

But what next? The National Catholic Reporter is running an article by Richard Rohr in which he notes: “It will be hard to go backwards after Francis’s papacy.”

That’s the triumph of hope over experience, I fear. If the Curia could nullify key parts of Vatican II in ten years, they could nullify Pope Francis’s legacy in ten days.

So here is the $64,000 question: can he institutionalize all this? That was Vatican II’s failure. Can he redress it?

We are about to find out. His meeting with the eight cardinal advisers charged to recommend what the Church should do to reform itself is underway now. This will be crucial.

The interview makes clear that Francis has radical approaches in mind.

For example, he wants to stop the regular synods of bishops from being rubber stamps. From the start when Paul VI set it up in the last year of the Council, the synod has never been what the Vatican II bishops envisaged and wanted.

It is significant that he mentions the Orthodox Church in this connection. Addressing the Roman Catholic bishops meeting in synod in 2008, Ecumenical Patriarch Bartholomew firmly stated that there could never be realistic prospects of union unless the Roman Catholic Church was seen by the Orthodox to give an effective role to synodical government.

Francis also wants to revive the associated Vatican II doctrine of collegiality – put on the shelf by John Paul II and Joseph Ratzinger. The “path of collegiality,” he has said (government of the Church by the college of bishops, with and under the pope), is the road that can lead the Church to “grow in harmony” with the service of papal primacy. In this respect the appointment of the eight cardinal-advisers is a step in the right direction--but it is nowhere near what Vatican II meant by collegiality.

It is further evident from the interview that he thinks women could be given positions of authority. The “challenge today,” he says, is to consider “the specific place of women… where the authority of the Church is exercised for various areas.”

We might want to fasten our seatbelts. The road ahead could be rough. This pope is not only an evangelist, he is also a leader and manager. Argentinian journalist Alberto Barriaga, by no means an admirer, has said: “Everybody is talking peace and love but he’s a real tough son of a bitch. He’s a Jesuit. He doesn’t move directly on an objective. He will surround it and when it is the right moment, he will pulverize it.”