The Poetry of Saint Thomas

From the December 1, 1933, Issue
By G. K. Chesterton
From the Archives
Poetry
Theology 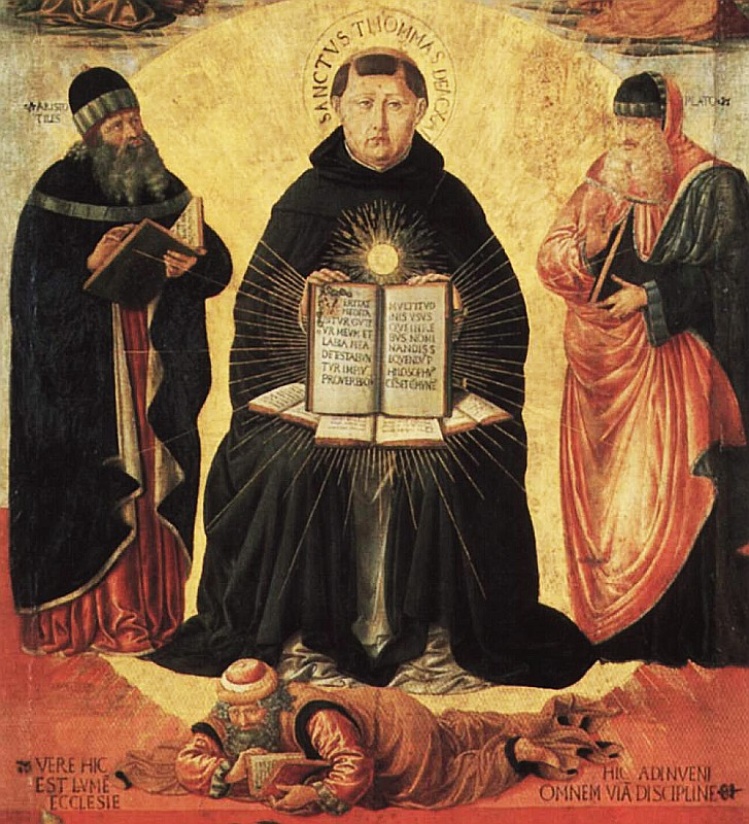 Detail from "Triumph of St. Thomas Aquinas over Averroes" by Benozzo Gozzoli (1420–97)

This is an extract from the last chapter of Saint Thomas Aquinas, by G. K. Chesterton, which is soon to be published by Sheed and Ward.

It is often said that Saint Thomas, unlike Saint Francis, did not permit in his work the indescribable element of poetry: As, for instance, that there is little reference to any pleasure in the actual flowers and fruit of natural things, though any amount of concern with the buried roots of nature. And yet I confess that, in reading his philosophy, I have a very peculiar and powerful impression analogous to poetry. Curiously enough, it is in some ways more analogous to painting, and reminds me very much of the effect produced by the best of the modern painters, when they throw a strange and almost crude light upon stark and rectangular objects, or seem to be groping for rather than grasping the very pillars of the subconscious mind. It is probably because there is in his work a quality which is primitive, in the best sense of a badly misused word; but anyhow, the pleasure is definitely not only of the reason, but also of the imagination.

Perhaps the impression is connected with the fact that painters deal with things without words. An artist draws quite gravely the grand curves of a pig; because he is not thinking of the word, "pig." There is no thinker who is so unmistakably thinking about things, and not being misled by the indirect influence of words, as Saint Thomas Aquinas. It is true in that sense that he has not the advantage of words, any more than the disadvantage of words. Here he differs sharply, for in­ stance, from Saint Augustine who was, among other things, a wit. He was also a sort of prose poet, with a power over words in their atmospheric and emotional aspect; so that his books abound with beautiful passages that rise in the memory like strains of music; the illi in vos saeviant; or the unforgettable cry, "Late I have loved thee, O Ancient Beauty!"

It is true that there is little or nothing of this kind in Saint Thomas; but if he was without the higher uses of the mere magic of  words, he was also free from that abuse of it, by mere sentimentalists or self-centered artists, which can become merely morbid and a very black magic indeed. And truly it is by some such comparison with the purely introspective intellectual, that we may find a hint about the real nature of the thing I describe,  or rather fail to describe; I mean the elemental and primitive poetry that shines through  all  his thoughts; and especially through the thought with which all his thinking begins. It is the intense rightness of his sense of the relation between the mind and the real thing outside the mind.

That strangeness of things, which is the light in all poetry, and indeed in all art, is really connected with their otherness; or what is called their objectivity. What is subjective must be stale; it is exactly what is objective that is in this imaginative manner strange. In this the great contemplative is the complete contrary of that false contemplative, the mystic who looks only into his own soul, the selfish artist who shrinks from the world and lives only in his own mind. According to Saint Thomas, the mind acts freely of itself, but its freedom exactly consists in finding a way out to liberty and the light of day, to reality and the land of the living. In the subjectivist, the pressure of the world forces the imagination inward. In the Thomist, the energy of the mind forces the imagination outward, but because the images it seeks are real things. All their romance and glamor, so to speak, lie in the fact that they are real things; things not to be found by staring inward at the mind. The flower is a vision because it is not only a vision. Or, if you will, it is a vision because it is not a dream. This is for the poet the strangeness of stones and trees and solid things; they are strange because they are solid.

I am putting it first in the poetical manner, and indeed it needs much more technical subtlety to put it in the philosophical manner. According to Aquinas, the object becomes a part of the mind; nay, according to Aquinas, the mind actually becomes the object. But, as one commentator acutely puts it, it only becomes the object and does not create the object. In other words, the object is an object; it can and does exist outside the mind, or in the absence of the mind. And therefore it enlarges the mind of which it becomes a part. The mind conquers a new province like an emperor; but only because the mind has answered the bell like a servant.  The mind has opened the doors and windows, because it is the natural activity of what is inside the house to find out what is outside the house. If the mind is sufficient to itself, it is insufficient for itself. For this feeding upon fact is itself; as an organ it has an object which is objective; this eating of the strange strong meat of reality.

Note how this view avoids both pitfalls; the alternative abysses of impotence. The mind is not merely receptive, in the sense that it absorbs sensations like so much blotting paper; on that sort of softness has been based all that cowardly materialism, which conceives man as wholly servile to his environment. On the other hand, the mind is not purely creative, in the sense that it paints pictures on the windows and then mistakes them for a landscape outside.  But the mind is active, and its activity consists in following, so far as the will chooses to follow, the light outside that does really shine upon real landscapes.

In other words, the essence of the Thomist common sense is that two agencies are at work: reality and the recognition of reality; and their meeting is a sort of marriage. Indeed it is truly a marriage, because it is fruitful; the only philosophy now in the world that really is fruitful. It produces practical results, precisely because it is the combination of an adventurous mind and a strange fact.

M. Maritain has used an admirable metaphor, in his book, "Theonas," when he says that the external fact fertilizes the internal intelligence, as the bee fertilizes the flower. Anyhow, upon that marriage, or whatever it may be called, the whole system of Saint Thomas is founded; God  made man so that he was capable of coming in contact with reality; and those whom God hath joined, let no man put asunder.

Now, it is worthy of remark that it is the only working philosophy. Of nearly all other philosophies it is strictly true that their followers work in spite of them, or do not work at all. No sceptics work skeptically; no fatalists work fatalistically; all without exception work on the principle that it is possible to assume what it is not possible to believe. No materialist who thinks his mind was made up for him, by mud and blood and heredity, has any hesitation in making up his mind. No skeptic who believes that truth is objective has any hesitation about treating it as objective.
Therefore, his work has a constructive quality absent from almost all cosmic systems after him. For he is already building a house, while the newer speculators are still at the stage of testing  the rungs of a ladder, demonstrating the hopeless softness of the unbaked bricks, chemically  analyzing the spirit in the spirit-level, and generally quarreling about whether they can even make  the  tools that will make the house. Aquinas is whole intellectual eons ahead of them, over and above the common chronological sense of saying a man is in advance of his age; he is ages in advance of our age. For he has thrown out a bridge across the abyss of the first doubt, and found reality beyond and begun to build on it.

Most modern philosophies are not philosophy but philosophic doubt; that is, doubt about whether there can be any philosophy. If we accept Saint Thomas's fundamental act or argument in the acceptance of reality, the further deductions from it will be equally real; they will be things and not words. Unlike Kant and most of the Hegelians, he has a faith that is not merely a doubt about doubt.  It is not merely what is commonly called a faith about faith; it is a faith about fact.

From this point he can go forward, and deduce and develop and decide, like a man planning a city and sitting in a judgment seat. But never since that time has  any  thinking  man of that eminence  thought that there is any real evidence for anything, not even the evidence of his senses, that was  strong enough to bear the weight of  a definite deduction.

From all this we may easily infer that this philosopher does not merely touch on social things, or even take them in his stride to spiritual things; though that is always his direction. He takes hold of them; he has not only a grasp of them, but a grip. As all his controversies prove, he was perhaps a perfect example of the iron hand in the velvet glove. He was a man who always turned his full attention to anything; and he seems to fix even passing things as they pass. To him even what was momentary was momentous. The reader feels that any small point of economic habit or human accident is for the moment almost scorched under the converging rays of a magnifying lens. It is impossible to put in these pages a thousandth part of the decisions on details of life that may be found in his work; it would be like reprinting the law reports of an incredible century of just judges and sensible magistrates. We can only touch on one or two obvious topics of this kind.

Tags
From the Archives
Poetry
Theology

G. K. Chesterton, who will write for The Commonweal, contributes to this issue an article in his most vigorous vein.