By Dorothy Day
From the Archives
Letters
Race
Spirituality 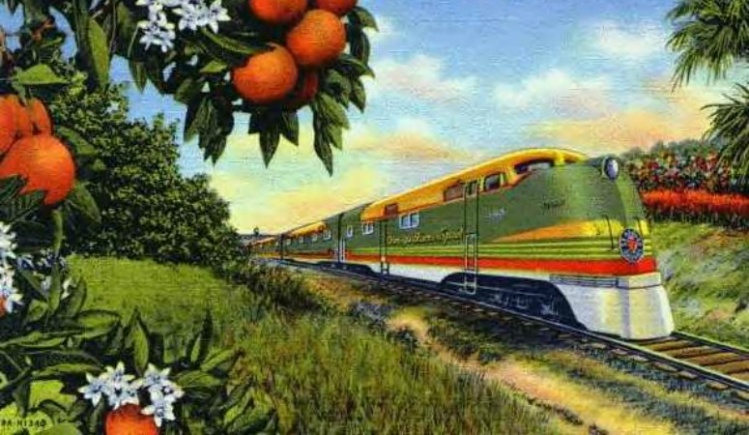 Young Teresa and I have moved our place of residence again and are visiting my mother in Florida. Florida is like the garden of Eden, and "Let us stay here always," Teresa says.

It is not a Catholic country—as Mexico or even New York, is Catholic. There are only four Catholic churches in Miami and the vicinity. One is in Coral Gables, three miles away from our house. This Church of the Little Flower is set in the midst of oleander, mango and grapefruit trees. On the next block to it is a large coeducational school in charge of the Sisters of St. Joseph, and here Teresa goes to school. In the kindergarten (Teresa is now five) the children learn to read and write and do simple sums. Teresa has been going to school for a month now and can read four pages of her primer.

As I write, big black storm clouds are rising in the south. To the east, through the open French doors, the sky is delft blue with little feathery clouds. The Florida pines rear their plumed masts to the sky, and under them, dotting the open fields, are seedling pines, bright green. There is a heavily wooded hummock at the end of the road, and only one house in sight, surrounded by scarlet crotons and a field of tomato plants. The sun comes from behind the clouds, shining brilliantly, but there is always the noise of the wind which has kept up now for months. Everyone says, “In September or October, the hurricane season, we would all be worried to hear such continuous wind.”

A quarter of a mile away is Coconut Grove, the colored town, where the little frame houses are so thickly surrounded by royal poinciana, strangler fig, mango, orange, grapefruit and other low-growing trees, that one can scarcely see them. Over­topping the other trees are banana palms and coconut palms. Most of the colored churches are called Churches of God, and on Sunday nights we often hear the gay singing from the nearest of them. We stopped one night and sat outside to listen, and I was sorry that I did not have Teresa with me to see the little girls dancing back and forth with babies in their arms.

I saw nothing to repel me there as one often is repelled at camp meetings of white people. It was a song meeting pure and simple, and occasionally the singers would get down on their knees and, burying their faces in the seats of their chairs. One fat old woman dressed all in white called out, “Praise God cause Ise got salvation.” An old grey-haired Negro echoed her. A little girl piped up, “Praise Jesus for coming and saving us.” And others called out their thanks.

Then someone started a hymn and the piano, the drums, the tambourines, the shuffling feet, the clapping hands, and the voices of men, women and children took it up. The rafters rang as the worshipers sang and danced. It was gay!

Toto is the old colored woman who works for my mother. Two weeks ago her eighteen-year-old daughter, Evelina—one of eight children—died. My mother and three other ladies for whom Toto works, went to the funeral on the following Sunday. It was held in the little Spanish-style Episcopal church down on Hibiscus Avenue. The gowned minister, the little boys with censers, the leader of the choir carrying the cross, and the choir of men and women and little boys waited outside under the mango trees until the funeral procession came down the street. The white coffin was covered with flowers, and on either side walked men in black and girls in white, carrying wreaths of real and artificial flowers. Then came Toto dressed all in black, with a black crepe veil; her husband, a skilled mechanic and son of a white man; Frank and John who work as housemen; Alfred who is married; the two little boys, R. J. and Eli; and the one remaining daughter, who is married, and her five children.

They all entered the church, which was filled to overflowing. The singing was impressive, the deep bass voices of the men in the choir booming out all over the church. The service went on with quiet dignity until after the sermon, when the choir was again singing. Night was falling outside. All day the sky had been an indigo blue, and intermittent showers had laid the dust and intensified the tropic colors. Through the deepening gloom of the church a wail started, a howling from Toto’s daughter who remained. Toto joined in, wailing too as she swung back and forth, swaying in her anguish.

When I came downstairs at seven the next morning, Toto was lighting the pine-log fire in the field to boil the clothes.She had not eaten nor slept for two nights and days but she wanted to work: it was a relief, she said. When I put a big lunch in front of her at noon, I sat talking to her so that she would forget she was eating and the food would not choke her.

All the Saturday night that Evelina died, they sang, Toto said, as they sat around her bed. There was Frankie, her most loved brother; her father; the minister from the church; and her two little brothers, R. J. and Eli. Every now and then R. J. and Eli went out to nibble at the fudge which I had sent over to Evelina the week before. The tuberculosis had gone to her throat and she had said that it helped, to suck on the sweet candy. But she would not want it any more, R. J. and Eli thought, and they had been very considerate before.

Toto sat out on the dark porch. Overhead the moon flickered through the leaves of the poinciana trees, and the rustling of the dried pods of the tree, which hung in yellow festoons during the day, sounded like the clapping of many hands.

Each time she went into the house, into the bedroom just inside the door, Evelina said, “Have you given me up yet, mother?” And Toto said, “No. I can't give you up.”

Then Evelina said, “Go and talk to the Lord, mother, and see if you can't give me up. You are keeping me here and I want to go.” So Toto went out on the porch again and sat in the cold moonlight and talked to God.

Finally when she went in, Evelina said, “Mother, have you given me up?” And Toto said, “Yes, child, I have given you up to the Lord.” And so Evelina went to sleep, and in her sleep she died.

As I listened to Toto talking of Evelina, and of the children who are left to her, I thought of the dense gloom of that little porch, which is in reality but a platform since the porch blew away during the hurricane of 1926. I thought of the over­ hanging trees, of the seventeen avocado trees which Toto's children had planted around the house. I thought of the happiness that little house has seen and the misery it now contains. I thought of those night hours on the porch, and I heard again that awful wailing in the church. “But it is God's will,” Toto said, getting up from the table, her eyes strong and shining. And she went back to her ironing-board set up outside in the western sun.