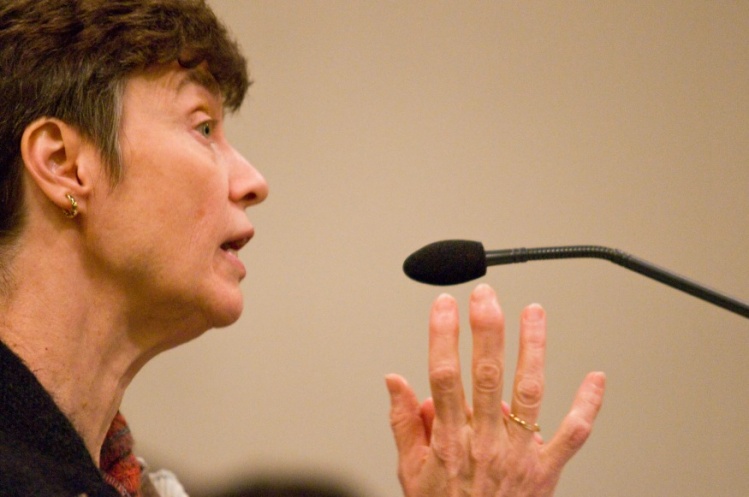 A passionately committed ecumenist, the theologian and teacher Margaret O’Gara was taken from us prematurely by cancer in 2012. O’Gara was an active participant in official dialogues among the Roman Catholic Church and Anglicans, Evangelicals, Lutherans, Mennonites, and others, both in North America and abroad, over several decades, and her ecumenical credentials run long and deep. Her husband, Michael Vertin, collects here a number of her essays as a sequel to her 1998 book, The Ecumenical Gift Exchange. O’Gara herself chose the title, No Turning Back, to express the irreversible commitment to church unity of those who follow Jesus today.

O’Gara came to her vocation naturally and early. Her father, James O’Gara, ran the Chicago Catholic Worker House and worked at Commonweal, as managing editor and then editor, for more than three decades. Her mother, Joan Smith, helped direct the Chicago Inter-Student Catholic Action movement. O’Gara reports that she determined to become a theologian at age twelve and wrote her first ecumenical essay while in high school. Her study and later her teaching at St. Michael’s College at the University of Toronto, with its ethnic and religious diversities, provided a seedbed for her ecumenical formation. There she mediated the different theological and cultural sensibilities presented by students from Africa, Asia, South America, Europe, and North America.

Part I of No Turning Back introduces the ecumenical perspective to a general audience. Written in vivid first person, the book’s short and direct vignettes, punctuated with insightful observations, explore and express the spirituality of ecumenism; in identifying a strength of her tradition for the Mennonites, for instance, O’Gara names “the tendency of sacramentally based solidarity to encourage and confirm an ecclesial commitment to justice and peace for the entire world.” These essays present the virtues of prayer, friendship, and hospitality that form the bedrock of ecumenism. The final essay shows how an ecumenist is personally transformed by rereading a common history, by analyzing teachings, by exchanging ecumenical gifts, and by learning to collaborate. This transformation, in which we collaborate for the sake of evangelization, allows us “to announce the Gospel,” O’Gara writes, “to a world that longs to hear this good news.”

Part II contains longer and more technical essays, many of which reflect O’Gara’s  expertise—dating to her doctoral dissertation on the minority bishops at Vatican I—in issues of papal primacy, infallibility, ordained ministry, and teaching authority. She points out that Vatican I spent a lot of energy on the subject of papal infallibility, leaving the topic of papal primacy relatively unexamined—and thus a promising area for development through ecumenical dialogue.

In 1896 Leo XIII declared Anglican orders null, largely on the suspicion that the Anglican ordinals of 1550 and 1552 and the Book of Common Prayer of 1549 and 1552 were designed to exclude the sacrificial dimensions of the Eucharist and the priesthood. O’Gara suggests that the time may be ripe for a reexamination of the validity of Anglican orders. A reevaluation of Apostolicae Curae, liturgical changes in Anglican ordinals and developments in Anglican liturgical theology, an expanded Catholic theology of ordained ministry in the teaching of Vatican II, and ecumenical agreements on ordained ministry—all of these developments offer a new context for reassessing the 1896 judgment.

Following the example of a solution in the Donatist controversy, O’Gara emphasizes the intention “to do what the church does” in assessing both ministry and apostolicity. She argues that advances in the theology of apostolic succession include an awareness of its primary manifestation in the church as a whole, as “an expression of ‘permanence’ and ‘continuity of Christ’s own mission in which the church participates’ (The Porvoo Common Statement).’” Episcopal succession is a sign, but not guarantee, of this apostolicity. Conversely, the Niagara Report, issued by the joint Anglican-Lutheran Consultation in 1987, asserts that “a material rupture in the succession of presiding ministers does not by itself guarantee a loss of continuity of apostolic faith.”

O’Gara points to the appointment of Lutheran bishops to historic sees at the time of the Reformation as evidence of their “intention to continue the life and ministry of the One, Holy, Catholic, and Apostolic Church.” She notes that where previously the reconciliation of church communions followed the recognition of ministries, today within an ecclesiology of communion “the reverse is the order of preference,” with the result that an assessment has to incorporate not only the intention of the ordained minister, but also that of the community.

Ecumenical work that still lies ahead includes the rethinking of the exercise of papal authority and the reconceptualization of teaching authority itself. O’Gara suggests a way forward in the recognition that the denials of one church may not contradict the affirmations of another. Thus, for example, “When Lutherans deny that the primacy of the bishop of Rome is divinely mandated, they do not deny that papal primacy could be conditionally necessary today for the effective proclamation of the Gospel in the contemporary world.”

Although the church may not turn back in its commitment to ecumenism, O’Gara reminds us, echoing Pope John Paul II, that “no pilgrim knows in advance all the steps along the path.” Nor will that path be easy for pilgrims bent on the spiritual transformation that flows from collaboration: “they spend their time and talents on lengthy studies of positions they only gradually come to understand,” O’Gara writes with sympathy; “they endure the embarrassment and frustration that flow from the sins of their own church communion and from those of their dialogue partner’s church communion as well; and frequently their efforts are feared or suspected by members of their own church.”