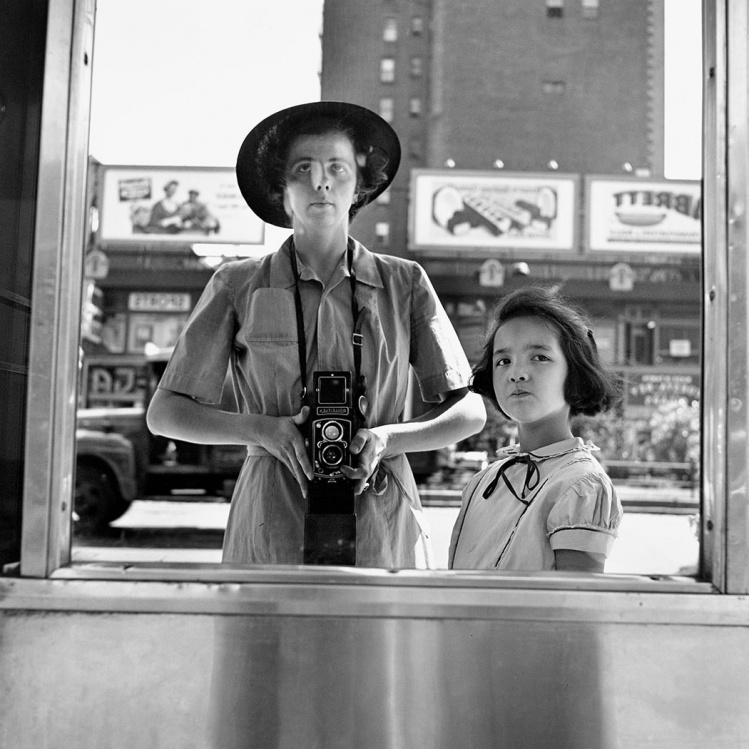 In an age when obscure talent strives for celebrity, it astonishes when real talent remains hidden. Vivian Maier’s obscurity was so complete that her first public notice was a death announcement: “Vivian Maier, proud native of France and Chicago resident for the last fifty years, died peacefully on Monday. Second mother to John, Lane, and Matthew. A free and kindred spirit who magically touched the lives of all who knew her. Always ready to give her advice, opinion or a helping hand. Movie critic and photographer extraordinaire” (Chicago Tribune, April 23, 2009).

Vivian Maier was a nanny who cared for John, Lane, and Matthew Gensburg from 1956 to 1972. They remember her as a Mary Poppins figure—energetic, adventuresome, and definitely the adult in charge. When they outgrew their need for a nanny she moved on to other families, but the Gensburg boys never forgot Ms. Maier. In her old age they paid for her rent and nursing care. It was they who posted the death notice.

But that was not the end of Vivian Maier. When the fees for her storage units went unpaid and the contents were auctioned, “recyclers” found troves of photographs along with rolls of undeveloped film. One of them, John Maloof, admired the photos, but searched in vain for their creator until the Tribune death notice popped up on Google. Now he has made her famous.

Maier has been declared a world-class street photographer, and prints of her pictures are said to sell for thousands. Her solitary after-work evenings and weekends roaming Chicago produced portraits of down-and-outers and women in fur jackets, crowds gathered for parades and at flea markets, buildings standing and buildings being demolished, animals dead and alive, stockyards, bridges, and elevated train platforms. All this work was stashed in the storage units.

Posthumous recognition began when Maloof posted some of her work online to the acclaim of Shutterfly users. He began to offer negatives and photos for sale. Her fame grew. His documentary Finding Vivian Maier has been widely reviewed. The BBC produced a TV documentary, “Who Took Nanny’s Pictures?” Exhibits have gone global. Some declare her to be the equal of Henri Cartier-Bresson and Diane Arbus.

Those accolades have not been enough. More than her talent, her fans want to know: “Why?” Why did she hide her work? She could have been rich and famous! “Why is a nanny taking all these photos?” asks Maloof at the beginning of his film. That is not what nannies do. But why not? Why not shoot a photo of a crying child or an imperious matron? Maier carried her Rolleiflex camera everywhere and used it with dexterity and intelligence from framing the image, to lighting, to focus, to eliciting the gaze of her subjects. Was there pleasure, as one critic observes, in her being “incredibly gutsy,” looking down to frame the picture while maintaining eye contact with her subject? Did she lose interest once the photo was developed? But, asks a former neighbor, “What’s the point of taking pictures if no one sees them?” And still another critic declares, it “isn’t art until it’s seen by others.”

Few people ever saw Maier’s photos. One who did was Don Flesch of Central Camera, whose shop developed the photos. In the BBC documentary, he says, “She wouldn’t like it [her posthumous fame] at all; too much delving into her life.” Indeed, both Maloof and the BBC have tracked down family secrets and interviewed the neighbor who saw her in old age eating out of a can. Flesch calls her “a private person,” and defends both her privacy and her reticence. He dismisses the exhibits and publicity as “only an interpretation” of Vivian Maier. “I have my own feelings about her,” he says, and presumably he has no use for Maier’s many new fans. Few refrain from creating “an interpretation,” above all one that explains “why” she “hid” her photos: she was mentally ill, she was a hoarder, she was mean, she was abused, etc.—all the modern diagnoses of a woman who kept to herself. In fact, maybe she was “incredibly gutsy,” and didn’t need the world’s acclaim, or all the interpretations that today analyze her rather than her art.