What the Virgin of Talpa Taught Me
By Fr. Incognitus
Arts
Spirituality
Columnists 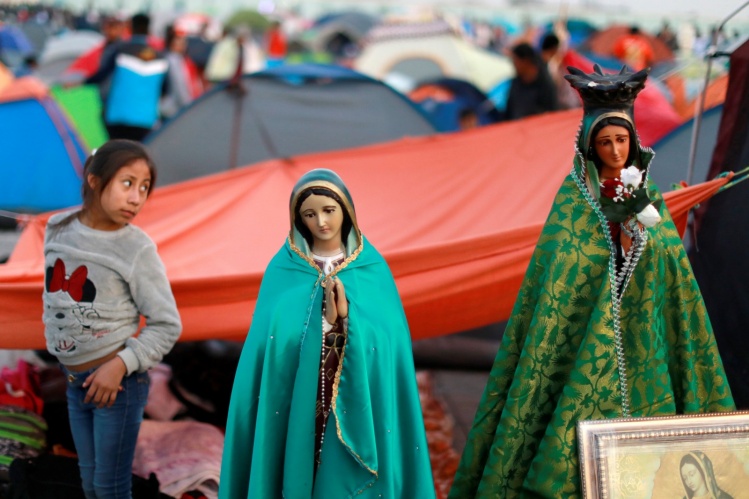 A girl stands next to statues of Mary, December 11, at a makeshift campsite outside the Basilica of Our Lady of Guadalupe during the annual pilgrimage in her honor in Mexico City. (CNS / Carlos Jasso, Reuters)

Editors’ Note: From 2009 until 2017, Fr. John Baran wrote a regular column for Commonweal under the pseudonym “Fr. Nonomen.” The column was devoted to Fr. Baran’s experiences as the pastor of a parish in suburban Connecticut—to trends he welcomed or lamented; to pastoral experiments that worked well, or less well; to the changing spiritual needs of American Catholics, and to the needs that didn’t change. When Fr. Baran died last year, we decided that, after a decent interval, we should ask a priest serving in a very different kind of parish to continue the column. This is the first of a short series of columns by Fr. Incognitus, who has worked in parishes in the Southwestern United States that serve immigrants from Central America, Mexican Americans, and Euro-Americans.

The call came in the spring of 2006. A group of people from the small town of Toyahua, Zacatecas, Mexico, wanted to use our parish church on a Friday evening to celebrate the arrival of a replica of the Virgin of their pueblo. The priest of the town would be there, as would the town’s band. It was just the sort of event that delighted me, so I said yes, thinking a few people would show up.

The church was packed. There are probably more people from Zacatecas living in the United States than in Mexico, and it seemed a good percentage of them came to our church that Friday night. The Virgin, no more than eighteen inches tall, wore a cowboy hat, and the toddler Jesus in her arms was crowned with the tiniest cowboy hat I had ever seen. The music was raucous and heartfelt, the procession to see the Virgin at the front of the church was long, and the people stayed to celebrate and visit.

I was transfixed. After more than twenty years of ministering to Mexican people, I, a European American, realized that my ministry was leaving out much of the devotional life of the people. We Euro-American priests were under the impression that if we focused enough attention on la Virgen de Guadalupe, we would meet the devotional needs of the Mexican people. It was true that la Virgen de Guadalupe occupies a special place in the hearts of all Mexicans, but that night taught me that Mexican Catholics had room for, and needed, more devotions than we were offering in the United States.

I was transferred to another parish in another state shortly after the event for the Virgin of Toyahua, but before I left, I asked friends of mine to get me a replica of the Virgen de Zapopan because I knew that there was a great devotion to her in western Mexico. I was told in no uncertain terms that their family had a devotion to Our Lady of the Rosary of Talpa de Allende and that would be the Virgin that I got—or none at all. There was, I discovered, a barely suppressed rivalry between the devotees of a number of these Virgins of western Mexico.

A few weeks later, now living five hundred miles away at my new assignment, I was told to call a phone number in the San Fernando Valley. So I did, and the person on the other end of the line told me I would be able to pick up the Virgin a few days later. Almost as contraband, she would come disassembled to avoid custom duties and the sister of the priest of Talpa would put her back together. When I arrived at a nondescript apartment complex to pick up the statue, the priest of Talpa was there and he described Our Lady of the Rosary of Talpa de Allende as the most powerful of the Virgins in western Mexico. I left for my new parish with her eighteen inches of spiritual force belted in the back seat of my car.

I feel very blessed to encounter these portals to a divine reality, these liminal images and activities that come to me from a religious culture only partially my own.
sharetweet

We built her a strong case so that she could travel safely. We offered to bring her to people’s homes for a night of the rosary and prayer. Inevitably we were met with relatives and friends, tamales and champurrado. More than once the parking lot of an apartment complex was conscripted and it became the site for an outdoor Mass. One day it rained on the parking lot ferociously and we huddled cheek by jowl in a garage for one of the most memorable Masses I’ve ever been a part of.

There was a small community centered at a dairy in the far reaches of the metropolitan area of my new parish. The people lived in company housing that reminded me of a small town from the 1950s. Everyone knew each other, and kids roamed the neighborhood freely at all hours. The people were lukewarm Catholics, and two families who had converted to Evangelical Protestantism were proselytizing the others. I was told to bring the statue of the Virgin out there. The Virgin stayed in this neighborhood for a while, and the little community soon became a hotbed of Catholicism. Even the Evangelical families returned to Catholicism.

A few years later I was transferred back to my original assignment, where I had first met up with the little statues of Our Lady. There was no way the people were going to allow the Virgin of Talpa to transfer with me. She continues her work there, and so I had to ask my friends to get me another Virgen de Talpa. This one arrived by plane! We soon set to work. Many miracles have been attributed to her as she travels from home to home several months a year. For example, there was the young man going before an immigration judge without much of a case. The judge had probably deported hundreds like him before and, after prayers were said before this image, the judge let him stay in this country legally. To cap the story off, the young man’s lawyer told him, “Whoever you prayed to, keep praying to. I have never seen anything like this.”

Some things work. There are Euro-Americans who will not come to our English Mass unless the mariachi is singing that Sunday. And the madness of Ash Wednesday has become a wonderful occasion for parishioners of every group to mark thousands of black crosses on the foreheads of all comers. I beg our U.S.-born Catholics to come to Candlemas Mass and see the sanctuary paved by the most bewildering variety of statues of Baby Jesus, all sitting up. The Way of the Cross that winds its way through our barrio with a cast of more than a hundred impresses everyone. I watched our police escorts using their cellphones to take picture after picture of the crucifixion of Jesus on a hill overlooking the most traveled freeway of the city. The devotional life of our Mexican and Mexican-American parishioners has an impact.

Maybe all the devotions from south of the border are destined to be bled of their original significance as they are adopted and adapted by Catholics from north of the border. That original significance depended on a different social context. But, for now, I feel very blessed to encounter these portals to a divine reality, these liminal images and activities that come to me from a religious culture only partially my own. And I can’t help thinking that they carry a truth that our Euro-American Catholicism is now in danger of forgetting: the heart of faith is in the transformation of physical realities into potent and visceral symbols of God’s love. While we might battle the pervading secularism with our minds, we won’t conquer it unless we fall in love with a God who comes to us through a variety of images, pilgrimages, songs, prayers, and holy places—in other words, a God who reaches us through such devotions.

Fr. Incognitus is a Jesuit who works in pastoral ministry.