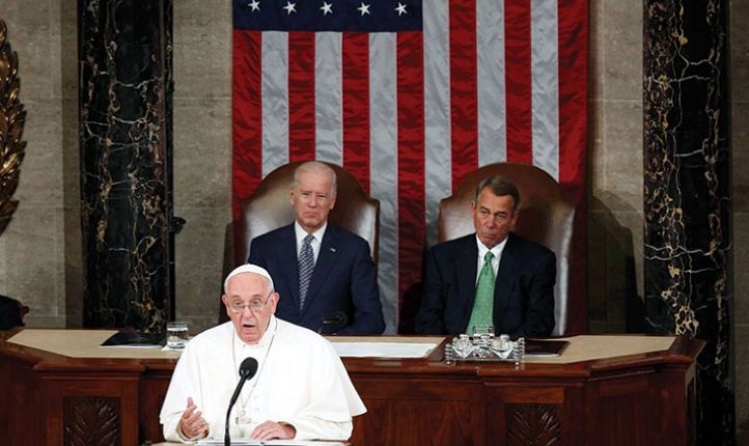 Speaker John Boehner’s unexpected resignation threw a sharp focus on Pope Francis’s opening words to the U.S. Congress in his visit on September 24: “Your own responsibility as members of Congress is to enable the country, by your legislative activity, to grow as a nation.” The threat of the “liberty caucus” among Republicans to close down the government yet again, the precipitating cause of Boehner’s departure, underlines their disdain not only for governance but also for “the common good…the chief aim of all politics,” as the pope reminded them. But the problem is larger than that.

Francis’s words and ideas are more than familiar and certainly congenial to our tradition of political discourse. Only a quarter-century ago, his speech might have received a genial assent: “Yes, yes, we know all that.” His early invocation of “the land of the free and the home of the brave” drew stand-up applause. His appeal to once familiar qualities and habits of mind not so much. “Dialogue,” “subsidiarity and solidarity,” “hard work and self-sacrifice,” “hope and healing,” “peace and justice,” “fraternity,” “cooperation,” “the Golden Rule,” “culture of care,” “build bridges” had their moments of attentive applause, but fell differently on the ears of Democrats and Republicans.

Among Republicans, Ronald Reagan’s “government is not the solution to our problem, it is the problem,” has become an article of faith. Thirty-four years after Reagan uttered those words, they have exploded and splintered into a thousand slogans highlighting the threat of government actions, remediation, or interventions, except in foreign wars. Republicans and conservatives see America threatened by the deficit, environmental regulations, entitlements, education reform, and taxation, as well as by people—immigrants, refugees, foreigners in general, and Mexicans, Russians, and Muslims, in particular. The Republican Party’s line-up of 2016 presidential candidates represents this party of fear.

Among Democrats, who do believe in government, there is a curious insouciance about the social and cultural ties that, as Francis said, “sustain the life of society.” Society lies at the core of any functioning political system, shaping its priorities and aspirations. In turn, that society depends on coherent social and cultural values that raise up citizens who understand “our compelling need to live as one, in order to build as one the greatest common good: that of a community which sacrifices particular interests in order to share.” Mention family values, and Democrats and liberals suspect a subterfuge for exploiting women. Mention self-control for children and adults, and they imagine dangerous forms of restraint and repression. Mention protecting life, and they say, Yes, except at the very beginning and the very end of life, and maybe we’ll think about capital punishment.

For those listening carefully in the House chamber, Francis will have presented some quandaries that they are more ready to ignore than engage. Democrats and Republicans are joined at the hip, whether through conviction or political cowardice, on gun control, nuclear deterrence, arms sales (especially to our already well-stocked allies), capital punishment, and whatever military illusion is sashaying through the hallowed halls of Congress. Appeals to common ground, dialogue, and peace, mercy, justice, self-sacrifice, and solidarity are lost in the baggage of wars (past and present), racial and identity resentments (by every race and gender), the auctioning of political office by campaign fundraising, and the cynical view that Speaker Boehner will hire himself out for a million-dollar salary to a D.C. lobbying operation.

Whatever the members of Congress heard or didn’t hear, Francis did a yeoman’s job of reminding them why they were there. Except for catching them off guard with the neat reverse play of segueing from protect life to abolish the death penalty, he told them things they had heard before and reminded them of tasks that have long awaited their attention. For a pope, he did all of this in a remarkably brief, straightforward, and gentle fashion. He did not even hesitate, as a religious leader, to voice self-criticism: “No religion is immune from individual delusion or ideological extremism.” Yet at the same time he rightly insisted that “today, as in the past, the voice of faith continues to be heard, for it is a voice of fraternity and love, which tries to bring out the best in each person and each society.”

Though Francis had never before visited the United States, his words and gestures are proof that he is no stranger to the practices and virtues of our political tradition. Good of him to remind us.