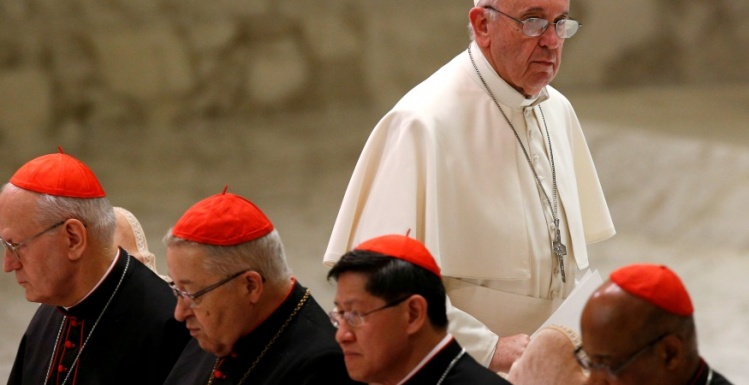 The fourteenth ordinary general assembly of the Synod of Bishops—or, “Synod on the Family Part II”—is in its final week.

Pope Francis will officially close the gathering next Sunday while presiding at a concelebrated Mass in St. Peter’s Basilica. And no matter what the Synod Fathers say in their final document, which they are to vote on Saturday, any divorced and remarried Catholics who happen inside the basilica for that closing liturgy will still be officially prohibited from receiving Holy Communion. Still, the Synod has not ignored their situation. Not by a long shot.

Whether the Roman Church can and should allow remarried Catholic divorcees (and others in “irregular” unions) to return to full sacramental life has been a hotly debated question these past few weeks, just as it was at last year’s extraordinary Synod assembly and during the twelve months in between.

Obviously, this is not the only issue the bishops were asked to address concerning marriage and family life (as it’s been said before, “there’s far too much meat on the fire”), but it has remained one of the most critical. And judging by the reports the thirteen discussion groups each issued this past Tuesday evening, the Synod Fathers are not of one mind on how to proceed on this question.

Only a few of the groups said, unequivocally, that there should be no change at all in the current practice or discipline. But most others offered various suggestions to move the issue forward. They included further study by a papal commission, a case-by-case approach under the direction of the local bishop or his delegates and a further examination of the Orthodox practice of fully integrating remarried-divorcees into the church’s sacramental life.

How evenly divided or lopsidedly split are the Synod’s members on the question? We won’t know until the final document is produced and the final votes on that paragraph are tallied, if the results of the votes are made public. They were last year and so there’s every reason to believe they will be again this time.

A number of bishops voiced surprise—and some even great delight—at the address Pope Francis gave last Saturday at a special event to commemorate the fiftieth anniversary of the Synod of Bishops. Indeed, it was quite the talk.

The pope further elaborated on one of the key themes from his apostolic exhortation, Evangelii Gaudium—the need to reform the mentality and structure of Church governance. He probably felt he had to, seeing as so few people seem to have studied and meditated on the nearly two-year-old document, which Francis continues to see as one of the more important of his pontificate.

In his talk last Saturday, the pope spoke again of the need for a “healthy decentralization” of church authority, a further development of synodality at all levels of the church, and a new way for the bishop of Rome to exercise papal primacy for the sake of Christian unity.

He said, “The hope expressed by the [Second Vatican] Council that such bodies would help increase the spirit of episcopal collegiality has not yet been fully realized.” Then in an adlibbed remark he said, “We are still on the way—halfway there.” The Vatican translation reads “part-way there"; No matter, the point is that Francis believes there is still a long way to go.

Unfortunately, if collegiality is ever going to work effectively and “felicitously” (to use a bit of curia-speak), the church has to elect better bishops than those in the current crop.The latest proof of this came at the beginning of this Synod, when thirteen cardinals sent a private letter to the Pope. In it they raised alarming questions about the Synod’s methodology and its personnel—as they were approved and desired by Francis.

Of course, no one contests the duty of a cardinal (or any bishop) to speak honestly with the Bishop of Rome, and even respectfully disagreeing with him at times. But these thirteen men did so in a duplicitous way.They had hoped their ploy to “right” the Synod would remain secret and they were furious—probably deeply embarrassed, too—when the other bishops and the whole world quickly found out. That’s because it was one among them who leaked the letter to someone else, and it ended up in the press.

This incident underlines one of the problems Pope Francis is facing—even among the Church’s most senior bishops there are those who act like schoolboys, going behind the backs of their peers and tattling to the teacher.

It takes a couple of years in a pontificate before a pope can start putting his own stamp on the church’s hierarchy through the appointment of bishops and the creation of new cardinals. It’s regrettable that there is not a better process for selecting our pastors and decision-makers, but this is what we’re stuck with for now. The good news, at least for Vatican II reform-minded Catholics, is that the profile of the so-called “Francis bishop” is that of a “servant leader” who is close to his people and one who listens carefully to his people’s concerns.

I’ve not done an extensive investigation into the biographies of all the new bishops that have been appointed these past thirty or so months, but anyone who has been paying attention will have formed some strong impressions about the type of man Francis is selecting for episcopal office.

One impression is that a theology degree from a Roman university seems to be less of a requirement from appointment than in the past few decades. Also it would appear that more and more parish priests are being made bishops than chancery officials, although being a seminary rector still seems to be privileged path to the episcopacy. And another one of the new criteria is that a bishop be a man of dialogue, rather than a culture warrior.

Bishop of Padua, Claudio Cipolla, might be called the epitome of a “Francis bishop.” The sixty-year-old priest from the nearby Diocese of Mantua was in his seventeenth year as pastor of a parish last July when the Pope appointed him to his new position. During his installation last Sunday, Bishop Cipolla repeated his earlier request that the people call him Don Claudio—as he’s always been called—and stop using the title, “Your Excellency.”

Cipolla completed basic theological studies in Mantua’s diocesan seminary and was ordained a priest in 1980. In all but eight of his thirty-five years of priesthood—when he served as an assistant regional director of Italy’s Catholic scouting movement —he’s lived and worked in a parish. Don Claudio also served contemporaneously for eighteen years as the head of Mantua’s diocesan Caritas agency. No Roman titles, no desk job at the Vatican, no personal secretary to a cardinal.

But that’s not to take anything away from his predecessor in Padua, Bishop-emeritus Antonio Mattiazzo. He was a Rome-trained career papal diplomat and nuncio in Africa before returning in 1989 as bishop of his home diocese where he shunned the personal title of “archbishop.” And now, in retirement, he has moved to Ethiopia to be a missionary. You could call someone like him a "Francis bishop," too.