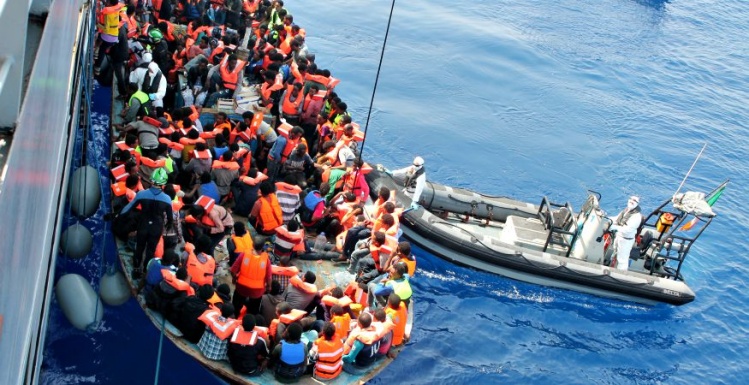 Who can forget the whirlwind first months of Pope Francis’s pontificate back in the spring of 2013?

Beginning with his surprising choice to take the name of the beloved and compelling saint of Assisi, it seemed like every day he was making another earthshaking decision. Among them was shunning the Apostolic Palace to reside with other Vatican-employed priests at the Santa Marta residence where all the cardinals lodged during the conclave that elected him.

In hindsight, though, it seems the most farsighted and prophetic moment of all came on July 8 of that first year.

Instead of going on vacation in the Italian Alps or transferring to the papal summer residence at Castel Gandolfo, as all of his recent predecessors had done, Francis went to Lampedusa.

But he did not go to the tiny island situated between Sicily and Malta for his summer holidays. Instead, he went there to focus the world’s attention on an issue most people did not want to face and were hoping would go away—the plight of migrants and refugees fleeing poverty or persecution, war or human misery, to seek a better and more secure life in Europe or beyond.

“Immigrants dying at sea, in boats which were vehicles of hope and became vehicles of death.” the Pope said, as he began his homily at a Mass for these boat people.

“When I first heard of this tragedy a few weeks ago, and realized that it happens all too frequently, it has constantly come back to me like a painful thorn in my heart. So I felt that I had to come here today, to pray and to offer a sign of my closeness, but also to challenge our consciences lest this tragedy be repeated.”

Pope Francis’s words that day fell mostly on deaf ears and, sadly, that tragedy has been repeated over and over again.

His homily in Lampedusa should be carefully meditated on again.

We have refused to take responsibility for our brothers and sisters; we have washed our hands of them, he said that day.

“In this globalized world, we have fallen into globalized indifference. We have become used to the suffering of others: it doesn’t affect me; it doesn’t concern me; it’s none of my business!” he continued.

This is not just a European problem. And Pope Francis is likely to repeat that even more forcefully next month when he addresses the United Nations in New York and the U.S. Congress in Washington.

The Pope has made many people uncomfortable by insisting that Europe be more hospitable to the migrants and refugees coming to its shores.

The Church in Italy, of which Francis is the Primate, has responded to his appeals by opening up space at parishes, convents and seminaries—some which are half-empty facilities—to offer temporary shelter for these people on the move. And a small handful of bishops have spoken out against the politicians and others who are stoking the sentiments of xenophobia.

Cardinal Angelo Bagnasco of Genoa, the man Benedict XVI named president of the Italian Episcopal Conference (CEI) in 2007, this week challenged the United Nations to take more “serious and decisive” action to help deal with this “human tragedy”.

But no one wearing a miter in the Bel Paese has been more vocal than Bishop Nunzio Galantino. He’s the former pastor of a small southern diocese that Pope Francis named CEI secretary-general two years ago.

“Don Nunzio” had been a parish priest and seminary instructor for 35 years when Benedict XVI appointed him in late 2011 to head the Diocese of Cassano allo Jonio in the poor, crime-infested region of Calabria. Only three years into the assignment, Francis called him to Rome to be his personal representative inside the bishops’ conference. He has also emerged, by papal fiat, as the national spokesman for the bishops, assuming the function usually reserved to the CEI president.

It’s not difficult to see why the pope “imposed” Don Nunzio on the conference and made him their “de facto” head. The two men are very similar in the way they so freely express themselves and, generally, in their theological and pastoral views.

But Bishop Galantino is not the Pope and his colorful language—especially in denouncing politicians—has provoked loud and angry reactions that would never be uttered here against Francis. The bishop’s most recent aside came in a written keynote address he sent this week to a conference in Trent in which he compared Italian politics to “a puzzle of personal ambition within a tiny harem of co-opted cunning people”.

Not all the bishops in Italy seem pleased with Don Nunzio. But he’s the country’s No. 1 “Francis bishop.” Where will he get his red hat next year? In Bologna or in Palermo?

It seems the first section of last week’s Letter from Rome ruffled a few feathers—first, by revealing that opponents of Cardinal Walter Kasper are currently finishing a new book to counter his proposals for developing the Church’s doctrine on marriage. The editor is once again Augustinian Fr. Robert Dodaro and the aim is to have the volume ready for the upcoming gathering of the Synod of Bishops.

And, second, by also revealing that Pope Francis has personally appointed several more prelates aligned with Kasper to attend the Synod.

The final line in that section was meant to be facetious—“Who knew there were so many ‘lefties’ in the hierarchy?” Instead, it caused gasps of disbelief in some quarters and set off alarm bells in others.

Lefties in the hierarchy? Only if one locates the center with the papacy, which made a buzz line (even further) to the right after the conclave of 2005.

The Letter occasioned a scribe known to be a reliable conduit of the thoughts and preoccupations of top aides in the previous pontificate to offer his views—or those of someone living in the old pope’s home—in a long, winding article that may have made its own very interesting revelations.

It claimed the editor of the new book mentioned above “is a German professor, and not the same editor as in Remaining in the Truth of Christ,” the title of first volume Fr. Dodaro oversaw.

Was this just erroneous information or is there yet another book?

Because only a couple of days ago Ignatius Press confirmed that Dodaro is, indeed, editing the book, which bears the alluring title, Eleven Cardinals Speak on Marriage and the Family: Essays from a pastoral viewpoint.

People at the Press may have pulled the title out of a hat. They were so quick to get the blurb about the book on its website that they did not even have time to design a cover for the 144-page potboiler.

And who are the eleven eminent authors?

There should be no worries about finding any lefties in this group.