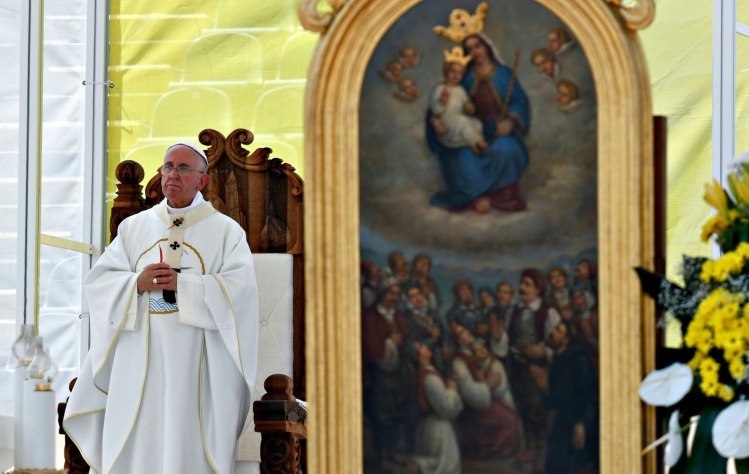 This is a very important and challenging week for Pope Francis. Depending on how things unfold, it could actually turn out to be historic.

On his agenda—but in very different contexts—are serious issues related to church reform and world peace.

The pope began tackling the first item on June 8 by launching three days of meetings with the council of nine cardinals he created to help him govern the universal church and reform the Roman Curia. It is the tenth time that the so-called “C9” have gathered around a table at the papal residence, Domus Sanctae Marthae, to hammer out plans for completely overhauling the structures and modus operandi of the church’s central offices.

It has been a slow process. And now, to complicate matters further, there’s an elephant in the room.

Cardinal George Pell, one of the C9 and head of the Vatican’s fledgling Secretariat for the Economy, has come under heavy attack once again for his alleged actions and inactions in dealing with clergy sexual abuse while bishop in his native Australia.

This is nothing new for Pell. But what makes the situation more sensitive and embarrassing this time is that the harshest accusations against the cardinal have come from Peter Saunders, a man the pope appointed last year to be a member of the Holy See’s Commission for the Protection of Minors.

Cardinal Pell’s problems are an inconvenient distraction and irritant that Francis and the C9 do not need right now as they look to finalize crucial internal reforms. So far the pope has not weighed in on this latest controversy.

The second major item in this week’s papal diary was a private meeting scheduled to take place today with Vladimir Putin. It comes at a time when Russia is experiencing escalating tensions with the United States and its Western allies. Just as Pope John XXIII helped diffuse the Cuban missile crisis between the Soviets and the Americans in 1962, don’t be surprised if Pope Francis emerges with a mediating role between Russia and the West.

The pope was in Sarajevo last Saturday continuing his campaign to promote dialogue among religions and cultures as the only viable path to world peace and coexistence.

Pointedly, he did not go to Medjugorje, which is only about a hundred miles southwest. Of course, religious pilgrims in increasing numbers have been flocking there since 1981 when six visionaries alleged to have seen the first of what they claim are still ongoing apparitions of the Virgin Mary. (The visionaries say she continues to appear to them every month at a precise hour.)

These are controversial claims that the Vatican has never approved as authentic, at least not up to now.

When Pope Francis was asked about Medjugorje last weekend on his flight back to Rome, he would only say that he’s seen the recently completed report from the international commission that Benedict XVI set up in 2010 to look into alleged Marian apparitions.

My bet is that the final verdict will stop just short of confirming their authenticity while granting official permission to Catholics to visit the shrine as a religious destination. That would probably be a compromise that the commission chairman, Cardinal Camillo Ruini, could live with.

The former vicar for Rome and powerful past president of the Italian bishops’ conference has a dog in this fight. That’s because the Vicariate of Rome—or rather its large and lucrative religious tourism agency, Opera Romana Pellegrinaggi (ORP)—stands to profit greatly if the Holy See allows it to officially resume pilgrimages to the Marian shrine.

A long time ago the Vatican stopped ORP from sponsoring such trips because of the ongoing controversy and also allegations of serious financial improprieties. No doubt, it has been agonizing for ORP to watch other agencies gobble up all the business, especially when numerous Catholic prelates (Cardinal Christoph Schönborn of Vienna, for example) have been making “private visits” for some time with large groups of fellow pilgrims.

But ORP is not completely an empty-handed bystander. Just over a year ago it started advertising a new “religious-cultural” destination in its glossy 75-page annual catalogue. It’s a six-day pilgrimage through those mythical holy lands in Montenegro and Bosnia Herzegovina. (Who knew?) And, of course, it includes an overnight “stop” in Medjugorje, although it discreetly avoids any mention of the Virgin Mary or her shrine.

Even if Pope Francis allows some sort of compromise on Medjugorje, he probably won’t be making a visit there any time soon. That seemed pretty clear by remarks he made this past Tuesday at his morning Mass.

“Where are the visionaries who are going to tell us about the letter Our Lady will send at four in the afternoon?” he said during his unscripted homily. “This is not Christian identity. The final word of God is called Jesus, and nothing more” – he continued – “Our Lady does not send messengers.”

Though he did not actually mention Medjugorje the reference could not have been clearer.  Not exactly a ringing endorsement from a pope who has a very strong Marian devotion.

Those who would identify themselves as “Vatican II Catholics” are probably not overly edified by the recent news that the body of St. Padre Pio (1887-1968) will be brought from his shrine in Southern Italy and displayed in St. Peter’s Basilica during Lent next year.

The body of St. Leopoldo Mandic (1866-1942), whose mortal remains are currently in a church in Padua, will also be sent to Rome. Both Pio and Mandic were revered confessors. The idea of making them the focus of special devotion at St. Peter’s during the Holy Year of Mercy is apparently to promote the Sacrament of Penance or Reconciliation.

Although it’s not clear how much Pope Francis subscribes to this type of popular medieval devotionalism, its various manifestations are flourishing in his pontificate. He’s proclaiming new saints and blesseds at a faster rate than John Paul II; he’s making a two-day visit to Turin to venerate the famous shroud many believe to be the burial cloth of Jesus Christ; and there’s no sign of indulgences disappearing.

But Pope Francis does draw the line on certain pious practices. For example, last Thursday he celebrated Mass in front of Rome’s Cathedral Basilica of St. John Lateran for the Vatican-observed Feast of Corpus Domini. As is the custom, there was a Eucharistic procession afterwards that headed about a mile up the road to the Basilica of St. Mary Major. The whole spectacle drew huge crowds on each side of the Via Merulana.

Francis walked in the procession last year, but this time (reportedly to save his strength for the trip to Sarajevo) he decided to go directly by car to St. Mary’s and await the holy parade there.

But more importantly he decided that he would not follow the practice of his two most recent predecessors who would kneel in front of a monstrance in the back of a flat-bed truck. As one Vatican official old me, “The pope wants the focus to be the Eucharist, not an old man in a pious pose in front of it!"