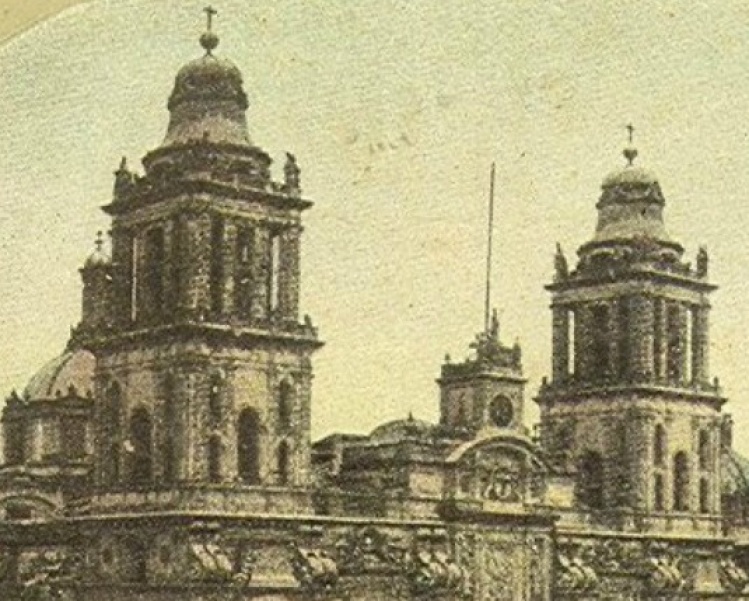 Outside the sun is pouring down on the roofs so that our several fat kittens seek the shade of the calla-lilies, heliotrope and other potted plants. I sit half in the shade, half out, just within the door which opens on our balcony and looks out over all the roofs. It is cold in our old stone building, and too hot outside. Soledad, the twelve-year-old girl of the house, is washing sheets in the flat stone laundry tub in the entry way, singing very cheerfully a gay Spanish hymn while she works.

Around her neck she wears a funny little rosary, as so many of the children do here—fifty tiny wooden beads, marked like cork, and a lead medal imprinted with a church like a wigwam, and two fir trees on either side. You buy these only at Guadalupe Villa, in front of the cathedral, and the prayers you say are directed of course to Our Lady of Guadalupe.

On every balcony there are cages of birds which do not sing, but whistle shrilly and call like parrots. Boys carry a dozen of them at a time on branches and they make no attempt to fly away. It is said that they are loaded down with small shot so that they cannot fly, but Señor Gomez, Soledad's uncle, says that they do not mind. It does not hurt them, but rather helps their digestion. If they did not have shot to eat, he says, they would eat gravel and small stones. They are very fat and healthy looking.

Last week, on Candlemas day, there were many cages of them hanging in the church. When the bells ceased ringing at the Elevation (and the clamor is as loud as two small boys can make it) you could hear the birds too, calling out piercingly, greeting the advent on the altar of their Maker.

Every morning I first go to the old church of San Jose, and thence to the market, just as all the women do here. The Nino Perdido street cars pass the church, so named not for any lost child of the neighborhood as I thought rather tragically at first, but for the lost Child Jesus, when He was separated from His holy mother and foster-father for three days. Nearby there is also the street of the Little Fishes, recalling one of the miracles of Jesus.

If one goes to eight o'clock Mass there are as many men as women in the congregation. But at the nine o'clock Mass which I usually attend, there are only a few men, mostly those who work about the streets and whose occupations give them more liberty. But the church is always thronged with women and children. There are those whom I presume to be sisters of some order, by the way they take charge of the children, and by the way the children kiss their hands as they take leave of them. You cannot tell them by the devout expression on their faces, because so many women of Mexico are marked by a quiet serenity.

Every day groups of women assist at Mass with scapulars six inches square about their shoulders which they take out of their market baskets when they enter the church and put back again when they leave. Another thing one notices—almost all the women assist at Mass with missals. They say the rosary in the church every evening, and not at Mass as so many in the United States do.

There are elegantly clad women, always in black, and many so poor that they must go barefoot on the cold stones of the church floor. Several barefooted little girls come in, and they have only one shawl between them so that they put it over their two or three heads and kneel together all through the service.

There is no formality during the service. The littlest children sit and play, silently of course, on the steps of the altar of San Antonio or Our Lady of Soledad. Many kneel at the altar rail all during the Mass, to be as close to the Blessed Sacrament as possible, and they do not interfere with those who wish to communicate, for the priest stands in one place at the foot of the altar, at the altar rail, and gives the Sacrament to the faithful who come two by two. At some special feast, indeed several times a week, the women bear lighted candles in their hands, which they extinguish after Communion and put back in their market baskets.

Communion is given before Mass, during Mass, and after Mass, and then the Sacrament is placed in the little chapel of the Sacred Heart where all day there are always scores of people worshiping with lighted candles in their hands, their arms outstretched. Many of the devout proceed on their knees to the altar rail.

It is strange to see the priests on the streets in grey or brown suits, and different colored felt hats, a grim reminder of those desolate years of persecution. The marks of that time are on all their faces. There are no young priests here.

I went to see Father Twaites, an Englishman who has been here for thirty years and who is now an old man, and when I reached his house I had a hard time gaining admittance. The porter professed to misunderstand me, and it was only after questioning several people that one woman whispered fearfully, "El Padre?" and showed me where to go. The people still tremble for the liberty and lives of their pastors.

There was a marriage in the church last Wednesday. A woman of the people with a black shawl over her head, knelt by the side of a tall cartero and after the marriage service the altar boys placed a wide satin scarf over her head and over the shoulders of her husband, and over that a white satin rope, knotting the two of them together for the rest of the Mass. An old barefooted Indian sat at the organ, with three little children kneeling beside him, and played and sang Gregorian plain chant—by ear, for there was no music in front of him. After Mass, several men with stringed · instruments played hymns in which all the congregation joined and the music was happy and triumphant.

Though there is no discussion among the people as to what is going to happen or as to what has happened between Church and state—the attitude, as I have said, is still fearful—there is much talk against the administration.

Señor Gomez, the very intelligent business man who is the uncle of little Soledad, says that the people are not at all satisfied with Ortiz Rubio. "They may talk about the election being a democratic one, yet 75 percent of the people do not want Ortiz Rubio."

We hear this many times from people of all classes,

"The reason he went to the United States, everyone says, was to escape assassination," Señor Gomez went on. "He himself fears it. Didn't he say as he was leaving the palace, just before the attempted assassination on the day he was inaugurated, 'They can shoot at me now, but nevertheless I am president'? Many people think he will not last very long. They feel that Calles has put him where he is, and they do not wish to be imposed upon. Shall I call us a reactionary people? I mean that we react against imposition. Calles wanted his hacienda—he wanted to remain in the country instead of leaving it as so many ex-presidents have had to do. So he put a man of his own in his place. He is safe now, he thinks. But he and Ortiz Rubio are far from safe."

On the other hand Vasconcelos seems to be popular with the people. He is a man of vivid personality, they say, and wide interests. To me he is an enigmatic personality. What I do not understand is why he commissioned Diego Rivera, the artist, to decorate all the public buildings when Diego is an avowed Communist and a bitter anticlerical. However, Diego has painted many noble pictures of the religious who have helped to uplift Mexico, among the frescoes in the Secretaria de Education, in addition to the savage ones directed against the clergy, whom Rivera holds are hand in glove with the capitalists to keep down the people.

There is great accent placed on the friendly relations between Mexico and the United States. The city is full of tourists and many entertainments are planned in their honor. There seem always to be delegations of business men and newspapermen in the city; in many cases, their expenses paid by the Mexican government. Just this morning I stopped in one of the many bureaus of information and came away with a half-dozen gorgeously illustrated books and calendars about Mexico, written in English for Americans and distributed free.

One pamphlet consists of a very beautiful calendar, "civico," to distinguish it from the religious calendars the people have in their homes. On every other page there is a picture in black and white by some prominent and popular artist, including many of Rivera's. One picture is of Sor Juana Iniz de la Cruz, by Tamiji Kitagawa, calling the religious, "sin disputa, el mas importante de nuestras letras coloniales.'' Another by the same artist is of Fra Bartolome de las Casas. There is still another of the nativity by Clemente Orosco. It is significant that two of these religious pictures are by Japanese artists, and the one by a Mexican artist, a picture for children, of the toys of the nativity which are sold in the Alameda. There are no religious holidays marked on the calendar, though Epiphany was a public holiday and Holy Thursday, Good Friday and Holy Saturday are observed by all business houses.

Now the two months midwinter holiday is over, and the schools are open. The public schools are housed in old buildings, and the rooms are gay with the work of the children. There are large gardens and swimming pools in the patios. The trouble is there are not enough schools. Attendance is supposed to be compulsory, up to the age of fourteen, but there are no truant officers to enforce attendance and one sees many children on the street who help their parents in their work, or who have not fit clothes to attend.