By Dorothy Day
From the Archives
Latin America
Liturgy
Spirituality 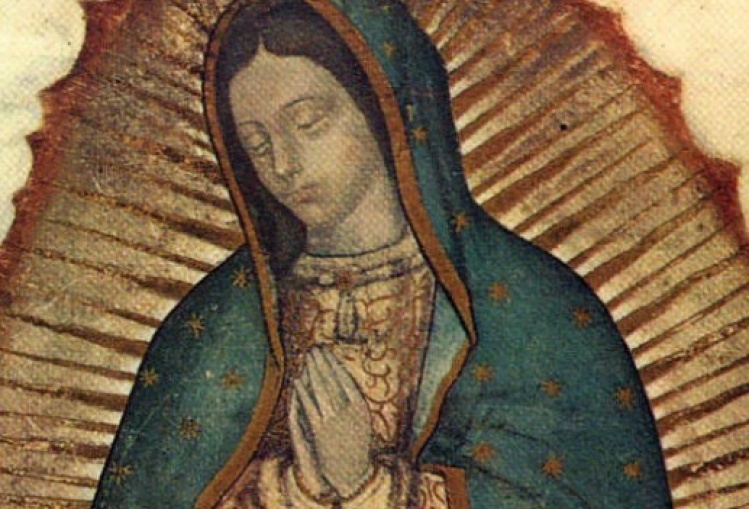 "Today," I announced to four-year-old Teresa, "we will go out to see Our Lady of Guadalupe."

"A pil'mage?" Teresa asked hopefully. Pilgrimages to her whether in New York, California or Mexico, mean very delightful bus rides, and in general a spirit of festivity, "I will bring Mary flowers." She always speaks of our Blessed Mother in a most familiar way. And forthwith, she began to strip heliotrope blooms from the plant which blooms in my French doorway, looking out over the roofs of Mexico City.

I put a stop to this depredation, telling her that we would buy flowers from a little boy in the market, but she stubbornly clung to a few, too short-stemmed blossoms.

Teresa is at a very precious age, the age when the apocryphal stories tell us that Saint Ann introduced the Blessed Virgin to the temple. The little girl Mary danced up the steps, the story says, and I remember it often when Teresa is inclined to be full of antics in church.

Busses are always crowded, but more exciting than street cars. We got in at the Zocalo, in front of the cathedral, and within a few blocks, two sheep got in too, or rather were pushed in, for their feet were tied together, and they lay on the floor of the bus at our feet, surveying us patiently. In front of the driver's seat hung a picture of Saint Christopher, and beneath the picture a little vase suspended for flowers. We were reassured by the presence of the Saint, for the bus careened madly around corners, past other busses, narrowly escaping pedestrians, urged on by the shouts of the conductor at every corner, "Vamonos," and by a vigorous slap of his hand on the tin sides of the camion.

The conductor is a gentleman beneath his rags. He gets out of the bus to help old ladies on. He lifts off the babies and children. He holds the market baskets for the women going home from their shopping. At one time, he had three gayly bedecked baskets, full of flowers, tomatoes, squash, one with a rabbit and still another with a live chicken, and in spite of his armful, he managed to collect the fares and help people on and off.

Teresa's enthusiasm was infectious. She squealed loudly at the spectacle of the lambs, the chicken and the rabbit. She wanted to know why there wasn't a pig.

"I'll sing a little song—all about a little pig riding on a burro, and all the little pigs have dirty faces—and that is Mexico."

No one could understand her song but the passengers laughed with her and the man next to us said, "Muy contento," and asked us where we were going.

Though the busses race along at a delirious speed, they are not impolitely hasty. If the driver sees anyone a block away indicating by gestures that he would like to come aboard, he stops to wait, and takes out a little top, which spins in the air, a "jo-jo" it is called, and which all the men and children are playing with at this time in Mexico City. But not the women. They have no time to play. They go to market and to mass. They are always washing clothes. When they have nothing else to do, they are fanning the charcoal fires in order that the men and the children may eat.

Guadalupe is only a few miles from the centre of the city, not as far as the Bronx is from lower Broadway. It takes only twenty minutes to get there. Though Christmas and Epiphany are passed, it is always a holiday at this shrine of the patroness of Mexico. December 12 is Guadalupe Day but the pilgrimages are not confined to the holiday season. Throughout the year tens of thousands of devout natives with their padres, come from distant cities in special trains to worship at their Virgin's shrine. As our Lady of Lourdes revealed herself to the poor peasant girl, so did our Lady again reveal herself to the poor peasant Juan Diego, filling his tilma with roses that he might convince the bishop—it was so long ago that it was the first bishop of Mexico—that his story of her appearance was indeed true. When he dropped the roses out at the feet of the bishop, his tilma was imprinted with a glorious picture of the Virgin, which is just as bright and glowing to this day as all the bright prints and reproductions which hang in every home, in every shop and market and place of business.

In front of the cathedral where the picture is enshrined are many booths where rosaries, candles and pictures are sold. On one side is a huge covered market which spills out into the streets for blocks around. On the other side there is a park where a ferris wheel and merry-go-round accompany with their clamorous music the prayers of the faithful in the church. And in the back, there is the hill of Tepeyac where the Aztecs lived before the Spanish conquest. Now the hill is surmounted by a cemetery and on the top is a lovely little chapel which looks out over the entire city of Mexico, sur­rounded by the mountains, of which the greatest are the Mujer Blanca and Popocatapetl, crowned with dazzling snow. Nestling close to this small church are many little adobe houses, built on the side of the hill.

After Teresa had blessed herself with holy water, and made her rather lopsided genuflection, she skipped out of the church again that she might lean over the low walls and peer into doorways at the chickens, pigs, lambs and pigeons, not to speak of cats and dogs which shared the houses and gardens.

"These are all Mary's babies," she said. "The little pigs and the chickens and the boys and the girls. And these are all little baby houses, and that," pointing to the church, "is the mama house."

It had been a hard climb up the slippery cobbled steps of the little hill, and we were glad to sit there for a while on one of the terraces looking down on the pueblo of Guadalupe. On a pilgrimage the devout Mexicans will climb that hill on their knees, but on ordinary days like this they content themselves with a lesser penance. When they enter the cathedral at the foot of the hill, they advance on their knees all the length of the church to the altar, holding aloft a lighted candle in their hands. Many mothers have bundles on their hacks as well as babies in their arms as they humbly pay their respects to the Mother of God.

When we descended the steps on the other side of the hill, there was still the holy spring to visit which is sheltered by a chapel domed with glazed tile. The spring boils up in the bottom of the walled-in well, and Teresa leaned over it fascinated. Attendants brought up water in copper buckets and poured out jugs full for the Mexicans and Indians who surround it at all times of the day, in order that they may drink.

"And oh, the tiniest baby church!" Teresa shouted, looking across the street where the littlest and humblest of chapels has been erected in honor of Juan Diego. There is room for only eight or ten people in it and it is the width of its doors which always stand open. Teresa had to say one of her tiny prayers here, "about you and me," she explained, and then she was ready for the bus again.

"And now, no more churches today," she sighed, surfeited as even the great saint for whom she was named confessed her weak flesh at times to be—"but a lollypop and peanuts instead."