Last Word: The Gospel According to Del Monte 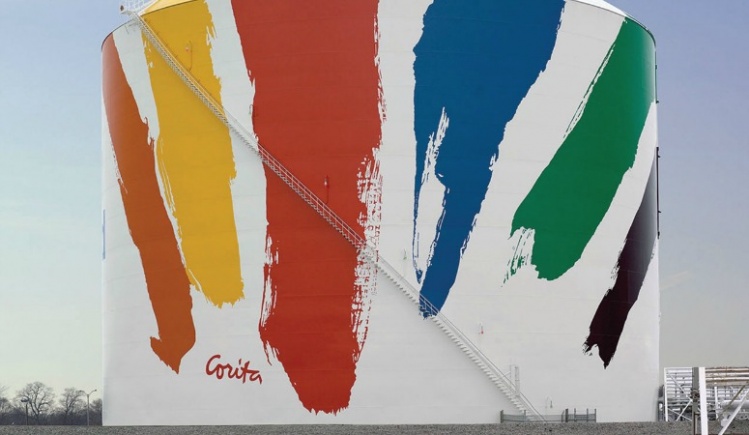 Much was written last fall on the occasion of the fiftieth anniversary of the close of the Second Vatican Council. It is often noted that it takes a generation or more for the teachings of an ecumenical council to be absorbed and implemented, especially a reforming council like Vatican II. A unique window into the creative energies and soaring hopes unleashed by the council were vividly in evidence in a recent exhibit mounted by Harvard University’s Fogg Museum, Corita Kent and the Language of Pop. The exhibit is now on display through May 8 at the San Antonio Museum of Art.

Catholics of a certain age remember Sister Corita Kent and her controversial work well. I became acquainted with her in the early days of my priesthood. It was in 1967, at the height of the Vietnam War, and I had been invited to attend a protest event called “An Evening with God.” This multimedia extravaganza featured Sister Corita as well as the Harvard theologian Harvey Cox (author of The Secular City), the Jesuit activist Fr. Daniel Berrigan, SJ, and the singer Judy Collins. For Catholics emerging from the “ghetto,” the remarkable changes ushered in by the Second Vatican Council combined with the turmoil of the civil-rights and anti-war movements were turning much of our world upside down. Those were heady days, and Kent’s life and art exemplified the times.

A member of the religious congregation of the Immaculate Heart of Mary, Kent was art professor at the congregation’s college in Los Angeles at the time. Her avant-garde work captured the ferment and tensions occasioned by the council as well as the dramatic changes taking place in the larger culture. Pop Art can be traced to Marcel Duchamps, who turned “found objects”—most notoriously a urinal—into what they insisted was art. Kent, along with Andy Warhol, Jasper Johns, Josef Albers, Roy Lichtenstein, and Frank Stella, figured prominently in the burgeoning movement in the 1960s, and all are represented in the Corita Kent and the Language of Pop exhibit. However, Kent’s ambitions were explicitly religious. Through the medium of the screen print, she provocatively turned the slogans of the advertising industry, especially regarding food, into a whole new religious language.

In 1962, Kent had visited the first exhibit in Los Angeles of Andy Warhol’s Campbell’s Soup Cans paintings. She thought that a similar embrace of the vernacular of the marketplace could be used to express religious sentiments. A seminal piece of Kent’s art, for example, is her screen print the juiciest tomato of all (1964). The reference is to an advertisement for Del Monte’s canned tomatoes, but Kent turned the phrase into a reference to the Blessed Virgin Mary. Likewise, she showed how Wonder Bread, an enormously popular brand at the time, could become a new expression of the meaning of the Eucharist. Kent and her students transformed contemporary advertising slogans such as “Come alive!” “Power up!” “Handle With Care,” into Gospel exhortations. As she explained her evangelical goals in Footnotes and Headlines: A Play-Pray Book, “all the words we need are in the ads, they can be endlessly resorted and reassembled. It is a huge grace, it is a way of confronting mystery.”

The current exhibit’s images, as the show’s title suggests, are combined with Kent’s handwritten texts citing passages from theology, philosophy, and literature as well as the famous advertising slogans. Her writing explores the deep yearnings of the human heart that popular culture endlessly evokes but ultimately cannot satisfy.

In 1968, Kent left religious life in the wake of the confrontation between Los Angeles Cardinal James McIntyre and the Immaculate Heart sisters over the order’s efforts at reform and renewal. She spent the rest of her life in Boston, where she died in 1986. Kent is perhaps best known to the general public for how she turned a large cylindrical gas storage tank located south of the city along Route 93 into a work of art. As she explained, the huge swatches of the colors of the rainbow running down the sides of the tank were an allusion to the creation account in the Book of Genesis. “To me, a rainbow represents hope, uplifting, spring….It is a joyous expression, joining heaven and earth together.”

Msgr. Charles Murphy is former rector of the North American College in Rome and founding director of the permanent diaconate in the Diocese of Portland, Maine.