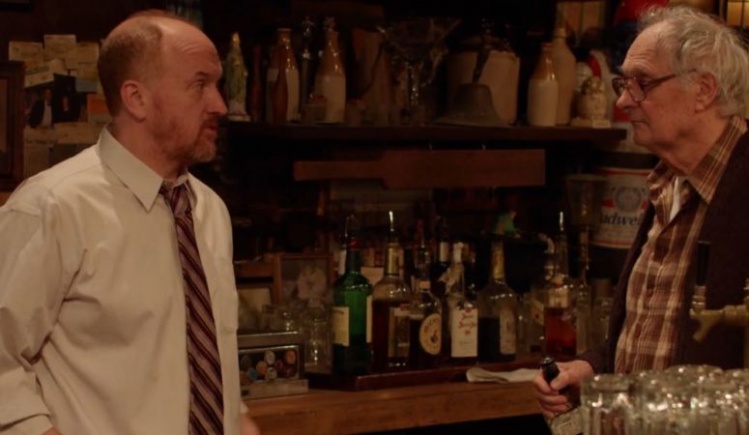 In the second episode of the new online show Horace and Pete, a young woman walks into a Brooklyn bar. She’s pale, pretty, mild-mannered, and wears a preppy tomato-red coat. She asks for white wine, but amiably settles for Budweiser on hearing that the bar sells only hard alcohol and a single brand of beer. All in all, she appears much more genteel than the average customer of this neighborhood dive—until she throws her head back, pounds her hands on the bar counter, and shrieks like a chimpanzee.

Such disquieting moments abound in Horace and Pete, created and written by the comedian Louis C. K., who stars in the series alongside Alan Alda, Steve Buscemi, Edie Falco, Jessica Lange, and others. A tale of a dysfunctional family running a hundred-year-old watering hole, the series looks much like a sitcom. But it abjures that genre’s breezy tone, slick banter, and tidy plot twists, and it takes a tonally complex approach to sobering and provocative topics, including guilt, bigotry, family rancor, sexual fantasies, and mental illness. Everything about Horace and Pete—its seriocomic ambivalence, its performance aesthetic, its production values—seems calculated to knock viewers out of their comfort zone.

There are moments when you don’t know whether to laugh, cry, or wince, as you acclimatize to the travails of Horace (Louis C. K.), a divorcé who is glumly running his family bar with Pete (Buscemi), who has been hospitalized for mental illness. (While in the hospital, Pete met Tricia, the woman in the red coat, who has Tourette Syndrome.) Helping out as bartender is the mean and boorish Uncle Pete (Alda), to whom modern civilities are entirely foreign. “This place ain’t racist. We served coloreds here in the ’30s!” he barks at one horrified patron. “I got a picture of a n****r sitting right there on that stool in 1930!” With Uncle Pete serving the booze, even ostensibly casual barroom chat has a jagged edge. One conversation between customers and bartender devolves into an unpleasant and foul-mouthed argument about abortion, hell, and the fate of unbaptized souls. Another involves an unsettling anecdote about a U.S. soldier in a Nazi concentration camp. As if the Petes weren’t enough of a handful, Horace also has to deal with his sister Sylvia (Falco), who is suing to gain control of the bar. And he longs to reconcile with his hostile daughter, Alice (Aidy Bryant), who at one point tells him, “I’m trying to be able to think about you without puking.”

The tensions between the characters register all the more strongly because of the show’s unfiltered production style. There’s little camera movement or cutting as the action unspools on the show’s two main sets: the bar and Horace’s upstairs apartment. And aside from a few notes from the show’s wistful theme song (by Paul Simon), no musical underscoring or processed sound effects have been laid on top of the scenes. So you often feel, a little disconcertingly, as if you’re watching a filmed stage play. Adding to this theatricality, and further accentuating the tensions between characters, is the show’s hyper-naturalistic acting style, with ragged speaking rhythms, minutely shifting facial expressions, and excruciatingly long pauses. The performance style becomes downright harrowing in the third episode, which begins with a female character, filmed in close-up, recounting a humiliating sexual indiscretion in agonizing detail. The fact that we do not yet know the identity of the woman (she turns out to be Horace’s ex-wife, played by Laurie Metcalf) adds to the sequence’s disorienting power.

In a note on his website—where Horace and Pete is available for purchase, via a remarkably user-friendly process—Louis C. K. says that he wanted viewers to experience the show in unmediated fashion. He launched the series on his website (louisck.net), with no advance notice “to provide it to you directly and immediately, without the usual promotion, banner ads, billboards, and clips that tell you what the show feels and looks like before you get to see it for yourself.” (The show’s first episode costs $5; the second, $2; and subsequent ones, $3.)

Much of today’s entertainment comes pre-branded and pre-pigeonholed, whether it’s familiar TV genres, blockbuster film franchises, or Broadway musicals made from movies. Horace and Pete reminds us that life is often too layered and untidy for such simplistic categorizing. “You are not aware of anything!” Alice protests to her father at one point. “You look at a person’s face, and if they’re smiling, you’re fine, and if they’re not, then you’re sad!” “Isn’t that normal?” he asks, hesitantly. “Yeah,” she scoffs. “For a five-year-old!”