A Stark Viewing Experience, in More Ways Than One
By Richard Alleva
Movies 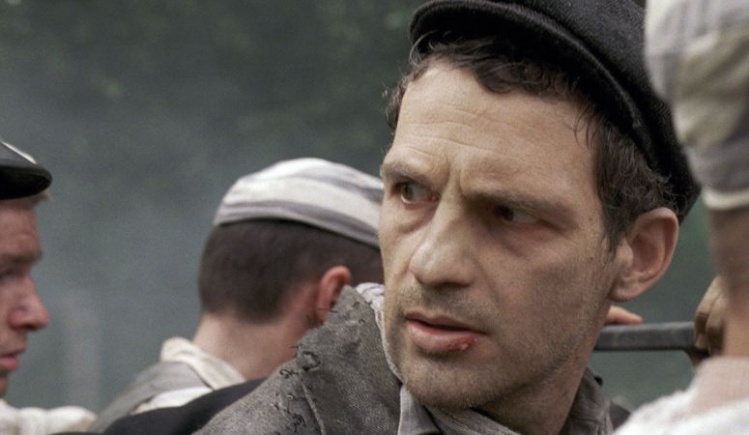 Laden with awards (the Oscar for best foreign-language film, a Golden Globe, the Grand Prix at Cannes), the Hungarian movie Son of Saul proves to be a stark viewing experience in more ways than one. Writer-director László Nemes takes us into the Auschwitz death camp one day in late 1944. The camera immediately fastens on Saul Auslander and never lets go. Saul is a Hungarian Jew whose duties as sonderkommando include tricking newly arrived prisoners—the elderly, the infirm, and children—into the “showers,” which are really cyanide-releasing death chambers, then carting the corpses off to a furnace to be incinerated. On the day we meet him, however, Saul discovers that one boy is still alive among the corpses, though in a comatose state. An SS officer soon smothers the survivor and turns the body over to an inmate-surgeon for autopsy. But Saul, possessed by the delusion that the boy is his son (we later learn that Saul has no son), is determined to give him a decent burial with the proper Jewish rite. The rest of the film deals with Saul’s retrieval and concealment of the body, his search for a rabbi to perform the ceremony, and his on-again-off-again involvement with two plots—one to photograph some of the camp’s horrors in order to inform the outside world, the other a revolt. (All these storylines are based on real events at Auschwitz.)

In the opening scene, as Saul ushers people to their doom with promises of soup and assigned tasks, the camera stays so close to his face that the victims remain shadows and blurs. These bodies rushing about him are perhaps not much more individualized to him than they are to us, and this indicates how the unending horrors of his assigned tasks have blunted his emotions. So this makes Saul’s quest for a proper burial all the more remarkable: something in his nature is finally breaking through the callousness he’s developed in order to survive.

Nemes’s most radical artistic decision was to severely restrict us to Saul’s point of view. Not only does the camera stick with him throughout the film; at times it seems perched on his shoulder. Employing only a few cuts (mostly to indicate jumps forward in time), the director keeps us in motion with his protagonist: we run when he runs, we see only what he sees, turn when he turns, cringe when he’s pushed or pummeled. This isn’t exactly the sort of flashy stunt that actor-director Robert Montgomery perpetrated with his crime drama The Lady in the Lake (1947), in which the subjective camera stood and moved in the place of the hero, whose face we saw only when he looked in a mirror. Saul’s countenance is always visible, and the actor playing him, Géza Röhrig, has an appropriately stoic yet haunted mien. But we are so close to that face for so long that Son of Saul very nearly dispenses with any visual depth. This pictorial shallowness often enhances the movie’s power, as in that unforgettable opening scene. It imprisons us so convincingly within Saul’s horrible reality that we are kept from making facile judgments about a person whose enslavement has forced him to make choices no one should have to make.

If the film dealt only with a typical day in the life of a sonderkommando, Nemes’s visual method would be completely justified. But Son of Saul takes place on a day that’s far from typical, and progresses toward an explosive climax and tragic conclusion. Rebellion is fomented, gunpowder smuggled, a hidden camera passed around. People are bribed, blackmailed, threatened with death. False identities are uncovered. While we remain focused on Saul’s features and movements, somewhere off-screen events that might fill an action movie are taking place. And though I never for a moment wanted Nemes’s extraordinary project to become a conventional genre piece, I often felt that more than one point of view would have been necessary to tell the story of this uniquely tumultuous day with enough clarity to answer certain questions. In view of the fact that Saul holds a post that requires him to do detestable things to his fellow Jews, was he ever truly trusted by the conspirators, or was he simply in the right place to help them? What happened to the Jewish doctor Miklos, who was ordered by the SS to perform an autopsy on the boy’s corpse and instead placed himself in grave danger by delivering the body to Saul? Was the conspiracy to smuggle a camera into the camp rendered redundant by the rebellion, or did the photos somehow make it to the outside world? These are plot points that could have been answered by a panoramic view of events, with the focus shifting from one character to another rather than fixed on one.

Oddly enough, that fixed focus also raises questions that can’t be answered about Saul. What caused his delusion? Did he entertain delusions of paternity even before Auschwitz? And, for that matter, who was the pre-Auschwitz Saul? What was his profession? Who were his family? How many of them are still alive? Was he deeply religious—is that what his quest for a ritual burial is about, or is it merely an assertion of his ethnic identity and an act of defiance? And why was Saul chosen to be a sonderkommando? Did the SS officers detect in him an instinct for persuasiveness or cruelty or deceit that they could manipulate? Nemes’s method does not allow him to answer any of these questions. By shunning flashbacks, exposition, depth of focus, crosscutting, and by refusing to clarify supporting characters, he casts a present-tense, you-are-there, hypnotic spell on the viewer, but also turns everything in the visual and narrative background into a blur. The film’s virtuosic constraints make for a raw viewing experience that leaves us feeling as hunted and tormented as Saul. It has moments that I expect never to forget: Nazi medical officers surrounding Saul and forcing him to take part in their mockery of Jewish dancing; long stares between prisoners trying to strike a bargain but not knowing how much they can trust each other; and, near the conclusion, the astonishing appearance of a little blond Polish boy at the mouth of a cave where some prisoners are sheltering. Such images, visceral in their impact, could only have been created by an artist of the highest caliber.

Nevertheless, the film’s tunnel vision makes me uneasy. What the Nazis intended to do to their Jewish prisoners before exterminating them was to reduce each one to the brutal solipsism of a hunted animal. After all, if an SS officer could convince himself he was wiping out predatory vermin, that made it easier for him to regard himself as a necessary servant of the state rather than a monster. As Primo Levi wrote about his fellow captives, “Whoever waits for his neighbor to die in order to take his piece of bread is, albeit guiltless, further from the model of thinking man than the most primitive pigmy or the most vicious sadist.” But, as Levi himself demonstrated in his books, many of the captives avoided this fate by thinking and acting together, by evolving an underground economy, practicing occasional acts of altruism, and even collaborating in the rebellion dramatized in Son of Saul. But because Nemes restricts the viewpoint of his film to that of a mostly mentally isolated and monomaniacal individual, he pushes the social interactions of the other prisoners to the periphery and gives Saul, despite his quest for a religious burial, an air of solipsism. We can only guess at where his madness ends and where his real nobility begins. He seems to elude Levi’s moral categories.

For me, at least, Son of Saul became less a portrayal of a person in torment than a study of a face, a face seen in perpetual close-up, one that reacts with minimal expressiveness to the encircling hell, turning this way and that as possible solutions give way to one menace after another, but always serving as a mask for the enigmatic Saul, who remains a stranger to be pitied rather than a man one can come to know.