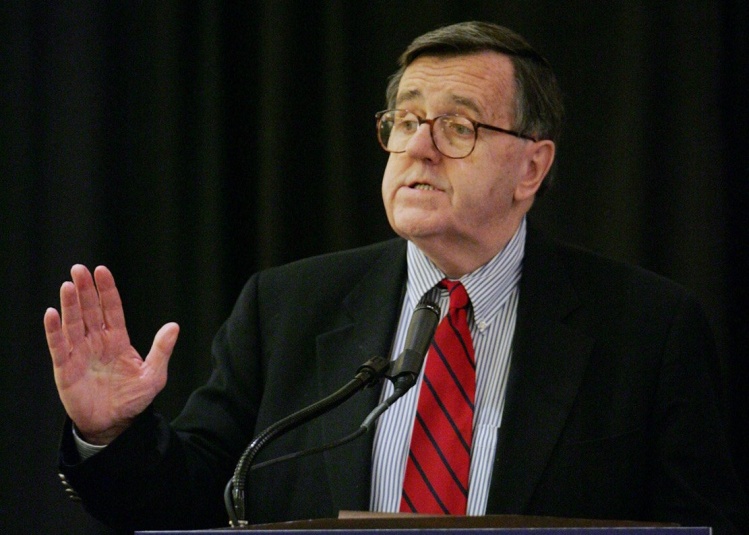 Mark Shields, a PBS commentator, Washington columnist, and Catholic layman, died on June 18, 2022, at the age of eighty-five. Mark offered a positive vision of politics, an example of faith in action, and a sense of humor and humility that we will greatly miss. His combination of Catholic values and civic virtues offered a way out of the angry polarization and failing leadership that often demoralize Washington and undermine both public and religious life.

He grew up outside Boston, in Weymouth, Massachusetts. He often said he was “born a Democrat and baptized a Catholic.” He was a proud product of Notre Dame University and the United States Marine Corps. Those ties endured through a life of service in politics and journalism. He served as an assistant to the late Sen. William Proxmire (D-Wisconsin). As a campaign strategist, he helped John Gilligan become governor of Ohio and Kevin White become mayor of Boston. He had a long record of working in noble but unsuccessful presidential campaigns, including the tragic crusade of Robert Kennedy and the campaigns of the “inevitable” Ed Muskie and improbable Mo Udall, as well as Sarge Shriver’s quixotic vice-presidential run in 1972.

After this life in campaigns, he became an editorial writer and columnist for the Washington Post and other newspapers. He survived two weekly political roundtable shows, The Capital Gang and Inside Washington. He became most widely known for his thirty-three years as a regular politics commentator on the PBS NewsHour, outlasting William Safire, Paul Gigot,  and David Gergen. He was then paired with New York Times columnist David Brooks, who called Mark the “best of American liberalism” at his 2020 retirement and “one of the finest and beloved men I’ve ever known” at his passing.

At his funeral, I shared my first and last meetings with Mark Shields, and what I learned in between. For years, I was one of many who thought Mark was one of my best friends, though I had never actually met him. When I finally did, I took him at his request to visit Catholic Charities homeless shelters. He engaged with empathy, sharing his own story of alcoholism and recovery. Mark asked me what he could do to help, beyond writing a check. I said he could use his gifts as a speaker. Mark’s version of this story was that I asked him if he believed in free speech, and that when he said “yes,” I told him: “Good, you’re going to give one.” In fact, Mark did give many “free” speeches, including those through his regular participation in the annual Catholic Social Ministry Gathering, and as Public Dialogues at our Initiative on Catholic Social Thought and Public Life at Georgetown University.

And for the last sixteen years, I spent Saturday mornings with Mark as I tried to join him on the path of recovery with others who treasured his friendship and his sober example.

Mark was not trendy. He thought a blue blazer, a striped tie, and a patterned shirt were high fashion. But when he died, he was trending on Twitter, as people praised his decency and mourned his passing. We used to joke that there were only three of us left on AOL and we didn’t know who the other one was. No, Mark wasn’t trendy, but rather traditional in the best sense: principled and loyal, consistent and persistent, not shifting with the wind or following the elite consensus.

More than anything else, Mark Shields was faithful.
sharetweet

More than anything else, Mark Shields was faithful. To his family: Anne Hudson Shields was at his side for more than fifty-five years, including when he passed away. Their daughter Amy Shields Doyle, son-in-law Christo, and grandchildren Jack and Frances were at the center of his life. So much of what we loved in Mark was because he loved them, and they loved him.

He was faithful to his nation, which he served as a young Marine, and continued to love and challenge with a patriot’s heart and a citizen’s gratitude.

He was faithful to Notre Dame, which gave a kid from Weymouth a great education. He served and cheered for Notre Dame for the rest of his life (though he was generous in cheering for Georgetown basketball as well).

He was faithful to his Church. Every Sunday he could be found in the last pew and taking up the collection at Blessed Sacrament in Washington. He lived the beatitudes, championing Catholic principles of human dignity and solidarity and challenging his Church’s failures. Mark was a Pope Francis Catholic before there was a Pope Francis.

He was faithful to politics, insisting that public service is a vocation, compromise is not evil, and politics is pursuit of the common good. He gave political leaders the benefit of the doubt until they betrayed the basic values of truth and trust and served the powerful over the powerless. He hated bullies and hypocrites and called out the pompous. A classic Mark Shields story: A particularly self-absorbed politician asked, “Why do people take such an instant dislike to me?” Mark’s response: “It saves them time.”

He was faithful to his profession—insisting journalism is a calling, a search for truth and insight, not clicks and status—and to his party, believing that Democrats are called to protect human life and dignity, stand with workers and welcome immigrants, lift up the poor, protect the weak, and challenge the strong. He said many times that his Church and party should “seek converts, not punish heretics.”

He was faithful to ordinary people. He treated those who watched and read his work, and people he encountered every day—camera people and interns, waiters and janitors, taxi drivers and TSA staff—like they were senators, Pulitzer Prize winners, and cardinal archbishops. He had a special passion for the underdog, but made an exception for the Boston Red Sox.

He was faithful to his partners in recovery, to whom he offered sponsorship, encouragement, and a compelling example of how to live with humor, gratitude, and purpose “one day at a time.”

The last time I saw Mark his body was frail, but his mind was sharp. He dissected the January 6 hearings like a Celtics playoff game. He wouldn’t talk about himself or his ailments. Typically, he asked about me, my family, and my work at Georgetown. We talked about the “inevitable.” I told him he had a great life, a wonderful family, and work that made a difference; how he blessed my life and made Washington and the nation better places.

Finally, I said, “We’re Irish, and we don’t hug,” but I gave him a hug anyway. I said thank you and goodbye. On June 22, hundreds of families, friends, and former colleagues came together, in a full church and in a grateful Washington, to say “thank you and goodbye” to a good man who showed us what a life of “faith, hope, and love” can achieve.

John Carr is co-director of the Initiative on Catholic Social Thought and Public Life at Georgetown University. This article is adapted from the reflections he offered at Mark Shields’s funeral on June 22, 2022, at the Shrine of the Most Blessed Sacrament in Washington D.C.