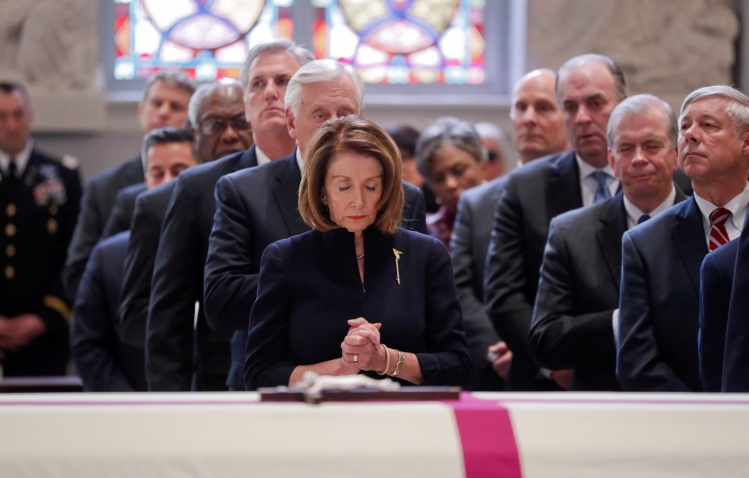 House Speaker Nancy Pelosi’s slow walk to an “impeachment inquiry” rested on the astute calculation that, given enough time, Donald Trump would overreach. And he did. His effort to pressure Ukraine’s newly elected president, Volodymyr Zelensky, into digging up dirt on former Vice President Joe Biden is certainly a misdemeanor. If it can be demonstrated from text messages and transcripts that Trump was withholding military aid to the beleaguered country until they agreed to investigate Biden, that would surely count as a high crime.

Pelosi’s measured pace brought along enough hesitant House Democrats to add weight to her announcement that the House Intelligence Committee would open an impeachment inquiry. The president, she said, had betrayed his oath of office, our national security, and the integrity of U.S. elections. He “must be held accountable—no one is above the law.” The White House’s refusal to cooperate with the House’s impeachment inquiry may add obstruction of justice to the list of impeachable offenses.

But will the inquiry actually end in impeachment? And would an impeachment actually lead to removal from office? If the evidence of a two-year investigation by Robert Mueller did not bring a House investigation together, what hope is there that a dodgy phone call to the president of Ukraine will rid us of our turbulent president? There he sits in the White House larger than life, crazier than ever. What assurances have we that we will be rid of him soon, or even after the next election?

For some of the same reasons he was elected, he could be reelected. Rafts of polling, analysis, commentary, and news reports lay out multiple, sometimes contradictory explanations for Trump’s 2016 win: a deeply polarized electorate, white working-class resentment, misogyny, racism, liberal condescension, the Electoral College, etc. All of these problems remain. Add to them Trump’s claims of a “deep state” trying to undo the results of the 2016 election—a conspiracy he is selling to his base in the 2020 campaign.

As of the middle of October, 42 percent of Americans say they approve of him. They may be joined next November by Republicans and Independents who may not approve of Trump himself, but who do approve of his tax cuts, deregulation, and willingness to play hardball with the Democrats. Then there’s the 58 percent who don’t approve of Trump or his policies, yet can’t seem to get enough of him. Left, right, and center, the whole country seems to be mesmerized by his attacks on Biden and Pelosi, the Democrats, the Squad, the poor, the hungry, the huddled masses, and our allies. What would the front pages of the New York Times or the Washington Post be without Trump’s transgressive behavior? What could Anderson Cooper, Rachel Maddow, Chris Wallace, or Sean Hannity talk about if not Trump’s serial outrages? How would Stephen Colbert shape his witty, sometimes transgressive, monologues without a daily dose of Trump’s tweets?

Americans have long delighted in bad boys. We relish watching people acting out and getting away with it, even as we tisk-tisk and shudder. This infatuation is perfectly described by Richard Levak, who was a consulting psychologist to The Apprentice, the reality-TV show that made Trump famous and convinced some Americans and many journalists that he was a tycoon and a money-making genius. In a recent New Yorker profile, Levak observes: “What made Trump so magnetic as a reality-television star was his impulse to transgress…and it is the same quality that has made a captive audience of the world. That somebody can become that successful while also being that emotionally undisciplined—it’s so macabre that you have to watch it…. And you keep waiting for the comeuppance. But it doesn’t come.”

Nancy Pelosi, Adam Schiff, and the House Democrats are now responsible for delivering Act One of that comeuppance. But it is Mitch McConnell and the Senate Republicans who are on call for Act Two, voting on whether to remove Trump from office. Even the unraveling of this presidency—over Ukraine, the Kurds, betrayal of our allies, his still-to-be-seen financial records, obstruction of justice, and several other transgressions—may not cause Republicans to revoke their deal with the devil. If they stand by Trump in spite of everything, Act Three will play on November 3, 2020, when Americans will have a chance to turn off the Government Reality Show and bring back a real government.