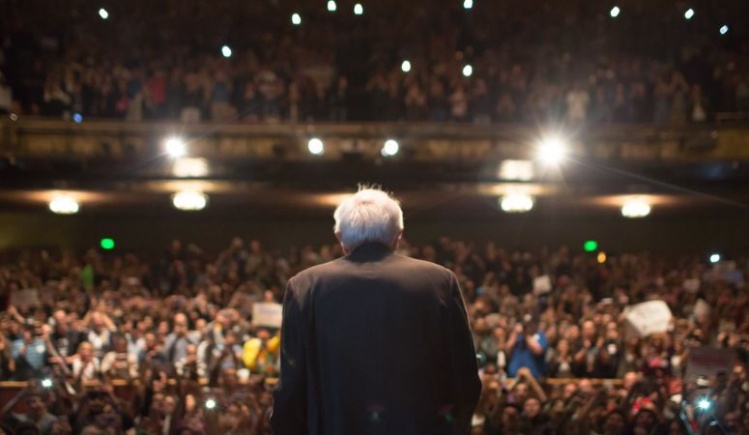 The 2016 election is transforming the religious landscape of American politics.

It’s hard to imagine a Democratic presidential candidate receiving a mid-campaign invitation to speak at the Vatican.

But on Friday, Bernie Sanders put out word that on April 15 he’ll attend a gathering of the Pontifical Academy of Social Sciences. Both Sanders and Hillary Clinton, his front-running rival, have regularly praised Pope Francis.

And on the day of Sanders’s announcement, Francis released Amoris Laetitia (The Joy of Love). The groundbreaking document signaled what can fairly be called a more liberal attitude toward sexuality and the situation of divorced and remarried Catholics.

The pope didn’t change church doctrine on gay marriage but was offering another sign that he’s pushing the church away from cultural warfare and toward a focus on poverty, economic injustice, immigration and the plight of refugees.

On the Republican side, the conservative evangelical movement is divided over Donald Trump’s candidacy. Many of its leaders have denounced him in uncompromising terms they usually reserve for liberal politicians.

One of his toughest critics has been Russell Moore, president of the Ethics and Religious Liberty Commission of the Southern Baptist Convention. “Can conservatives really believe that, if elected, Trump would care about protecting the family’s place in society when his own life is—unapologetically—what conservatives used to recognize as decadent?” Moore wrote early this year in National Review.

He added: “Trump’s willingness to ban Muslims, even temporarily, from entering the country simply because of their religious affiliation would make Jefferson spin in his grave.”

Such denunciations are good news for Ted Cruz, who began his campaign at Liberty University, an evangelical intellectual bastion, and had hoped to unify evangelical conservatives.

But in primary after primary, Trump has won a large share of self-described “born again” or evangelical voters, particularly in the South. In the Southern-inflected Super Tuesday contests in March, his showings in Tennessee, Georgia, and Alabama were exceptionally strong.

Evangelicals made up 77 percent of Alabama’s Republican primary electorate, and Trump carried them 43 percent to 22 percent over Cruz. Among non-evangelicals, Trump beat Cruz 41 percent to 18 percent, with roughly a third in this group casting ballots for either Marco Rubio, who has since dropped out, or John Kasich.

Even in defeat in Wisconsin last Tuesday, Trump did about as well among evangelicals (he won 34 percent of their ballots) as among non-evangelicals (36 percent).

In one sense, it is not surprising that the politics of white evangelicals are evolving. Their social issue frame and the most important institutions in their movement were created in the late 1970s and 1980s. But this year’s developments do suggest, as Elizabeth Bruenig (now of The Washington Post) argued in The New Republic, that “the old-fashioned model of reaching evangelicals no longer appears functional.”

Robert Jones, who is CEO of the Public Religion Research Institute (and with whom I have collaborated), sees many evangelicals now as “nostalgia voters.” Writing in The Atlantic, he said they are animated less by “a checklist of culture war issues or an appeal to shared religious identity” and more by an anger and anxiety arising from a sense that the dominant culture is moving away from their values.

A backlash around race, which led many white Southern evangelicals toward the Republicans in the 1960s even before the rise of the religious right, also appears to be at work. It is conjoined with opposition to immigration. And evangelicals, like other Republicans, are split by class and their degree of religious engagement.

Were Cruz to secure the Republican nomination, traditional patterns of white evangelical voting might well reassert themselves.

But with Pope Francis lifting up what can be called social justice Christianity, clichés that religion lives largely on the right end of American politics might finally be overturned.

This view was already flawed, given, for example, the long-standing activism of African-American Christians in the politics of economic and racial equity. Clinton especially has been engaged with black churches from the outset of the campaign.

Her own deep commitment to her Methodist faith and its social demands is central to her identity. It could be the key to solving her much-discussed “authenticity” problem, since faith is a powerfully authentic part of who she is.

In the meantime, a Jewish socialist presidential candidate will head off to the Vatican to make a case about climate change and social justice quite congenial to Francis’s outlook.

In today’s American politics, religion is working in mysterious ways.

Will We Ever Have Sane Gun Laws?