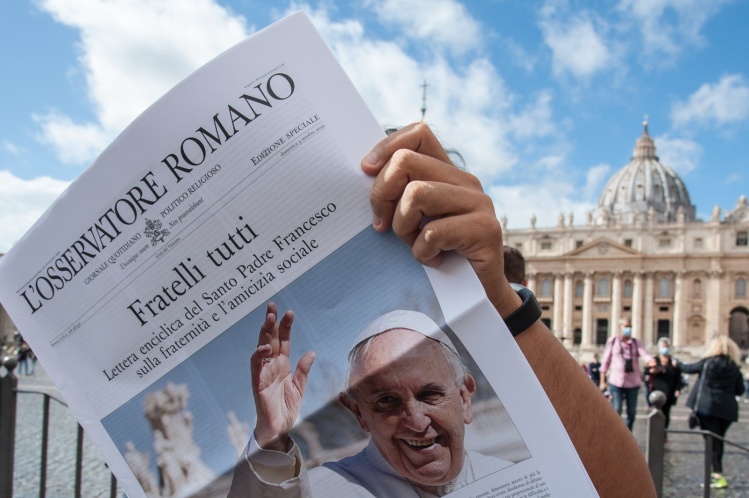 October 3, the day that Francis signed Fratelli tutti in Assisi, also happened to mark the twentieth anniversary of a somewhat less illustrious moment in the Church’s interreligious outreach. In 2000, a planned day of dialogue between Jews and Christians in Rome had to be canceled because of the negative reaction to Dominus Iesus, a recently published declaration from the Congregation of the Doctrine of Faith, led at the time by Cardinal Joseph Ratzinger. Around the same time, the Jesuit theologian Jacques Dupuis was under trial on charges brought by the Holy Office for his work on the theology of interreligious dialogue. How far we’ve come in twenty years, thanks to Jorge Mario Bergoglio. His new encyclical may signal not only the papacy’s shift from a strictly Roman Catholic tradition to one more oriented toward global Catholicism, but also a new paradigm in how the Church approaches relations with other faiths.

Fratelli tutti comes a little more than five years after Laudato si’—the longest interval in papal encyclicals since the gap between Pope Gregory XVI’s Commissum divinitus (“On Church and State,” 1835) and Probe nostis (“On the Propagation of the Faith,” 1840). Of course, after Humanae vitae, Paul VI did not write another encyclical in the remaining ten years of his papacy, because of the new bishops’ synods.[*] Given Francis’s vision for a Church that gives more importance to synods and to other kinds of documents, especially post-synodal exhortations, the space between encyclicals isn’t that surprising. This is also the first time a pope has issued an encyclical outside of Rome since 1814, when Pius VII signed Il trionfo in the Italian city of Cesena, after five years of imprisonment in France during the Napoleonic Wars. (In the same year, he also restored the Society of Jesus, which had been suppressed in 1773.) Coming in the midst of a once-in-a-century pandemic that highlights the crises of globalization and the social order, the timing couldn’t have been better. The encyclical quotes—and therefore includes as sources of the Catholic magisterial tradition—Blessed Charles de Foucauld, Martin Luther King Jr., Desmond Tutu, and Mahatma Gandhi, as well as the German Jesuit Karl Rahner (who was under investigation by the Holy Office through the time he was working with the German bishops in preparation for Vatican II). Cinematographic citations have also now entered the ordinary magisterium of the Catholic Church: the document mentions Wim Wenders’s 2018 documentary on Pope Francis three times. There are also five mentions of Ahmad al-Tayyeb, the grand imam of al-Azhar, with whom Francis signed the February 2019 Abu Dhabi document Human Fraternity, in many ways the predecessor of Fratelli tutti.

The language of “Fratelli tutti” is less systematic theology than spirituality and psychology.
sharetweet

The early reception of the document has been largely positive (deservedly so), while its most important teachings have been highlighted in Commonweal and elsewhere. Fears about rejection of the encyclical because of its title have not materialized (in the original Italian, the title sounds more gender-inclusive than in other languages). But it’s a long and deep text, one that should be read closely not just for what it says, but also for how it says it, given that it now becomes part of the long magisterial and theological tradition of the Catholic Church.

The language of Fratelli tutti is less systematic theology than spirituality and psychology. From this point of view, it makes sense that Francis quite often cites himself: there’s an enormous number of quotes from previous documents (especially Evangelii gaudium and Laudato si’) and from his speeches and homilies. He continues the tradition, inaugurated with Evangelii gaudium, of also quoting from the documents of national and continental bishops’ conferences, which is very important from an ecclesiological standpoint.

But compared to his other writing, there are fewer references to the settled magisterial tradition. Francis doesn’t even mention Rerum novarum, the 1891 encyclical by Pope Leo XIII that inaugurated modern Catholic social teaching (this was also the case with Laudato si’). This could very well end up affecting its reception by certain neo-fundamentalist and integralist Catholics, especially in the United States, who apply a more legalistic reading to how the magisterium of the Church is discussed while looking for evidence of material continuity with tradition. Though there are important teachings in Fratelli tutti on, among other things, social responsibility and property, the death penalty, and war, these readers are not likely to receive it with an attitude of papal positivism—that it’s Catholic because the pope said it.

It is surprising that Francis so frequently quotes himself when there are precedents he could draw from. In modern Catholicism, the idea of human fraternity and the one human family emerged explicitly at Vatican II, from Pope John XXIII’s inaugural speech, Gaudet Mater Ecclesia, to the first public message of the council, Message to Humanity, on October 20, 1962. But this is barely evident in Fratelli tutti, which quotes twice from Gaudium et spes and only once from the conciliar declaration on non-Christian religions, Nostra aetate (paragraph two, but not paragraph five, which would have been useful for the reference to the “imago Dei,” the creation of all in the image of God as the root of human fraternity). A beautiful section on religious liberty does not reference Dignitatis humanae, which brought a momentous change in the Catholic Church’s teaching on this subject. It’s curious, because Francis is clearly a Vatican II pope. While the council has become so much a part of the ecclesial consciousness in Latin America that quotations from its documents can seem superfluous, the same cannot be said for other parts of the world, such as the Catholic Church in the United States.

There’s also something interesting about the tone Francis strikes in this encyclical, in terms of how it relates to Vatican II. The first chapter is a list of calamities; it reads almost as the opposite of Gaudium et spes, in which the council emphasized the intent of the Church to share “the joys and the hopes” of the modern world. With the election of Benedict XVI, there emerged a clearly anti–Gaudium et spes theology, with papal teaching that was more pessimistic about modernity. Francis here expresses his own type of pessimism: even as he takes the side of justice for the poor, the marginalized, and the displaced, he makes clear to this generation of post–Vatican II Catholics that the situation facing the world today—especially climate change—constitutes a major challenge for the interpretation and application of Vatican II.

Also worth noting is how Francis reflects on the relationship between religion and violence. He makes clear that religion is predisposed to coexistence and dialogue: “The truth is that violence has no basis in our fundamental religious convictions, but only in their distortion” (282). What seems to be missing, though, is a call to religions (beginning with Christianity) to come to grips with the elements of their respective traditions and teachings that in fact have been used to justify violence and religious war. This brings to mind the council’s approach in Nostra aetate—which explicitly “deplored” anti-Semitism, but did not confront the theological problem of anti-Judaism as a religious sentiment rooted in the previous theological tradition. Since Vatican II, and mostly thanks to Pope John Paul II, the Church has made progress in not exempting itself from reexamining problematic teachings. But an encyclical like Fratelli tutti, with its emphasis on interreligious relations, will face greater scrutiny on this front, not only within the Church, but also from Jewish and Muslim authorities and scholars, not to mention in the secular world.

No matter Francis’s previous statements on clericalism and synodality, fraternity within the Church is a secondary subject in “Fratelli tutti.”
sharetweet

Then there are the issues that are simply missing in Fratelli tutti. Setting aside the flap over the title, not a single woman is quoted. It doesn’t even mention St. Clare of Assisi. Certainly, on issues ranging from immigration and social justice to interreligious dialogue, there are more than a few female saints and thinkers who could have been cited. The sections on racism and anti-Semitism are very short and sound perfunctory, especially given the rise of populist leaders with links to xenophobic Catholics. Even more troubling is that there is nothing on the problem of sexual abuse. If there’s something that wounded not only the sense of fraternity in the Church, but also the credibility of the Church to teach on human fraternity, it’s the scandal of sexual abuse. In the institutional Church, Pope Francis included, there remains a complete and dysfunctional separation between what leaders say about sexual abuse and what they say on all other issues.

This underscores a key feature of Fratelli tutti: no matter Francis’s previous statements and writing on clericalism and synodality (two words that do not appear in the document), fraternity within the Church is a secondary subject. His primary focus is on the Church in the world and for the world. It envisions a new social system while treating the current ecclesial and ecclesiastical system as a given. In that sense, Fratelli tutti is a major document in terms of the Church’s shift toward global Catholicism. It deserves to be received as a statement reorienting the posture of Catholicism worldwide, aligning the Church with the poor in the quest for justice. Some will welcome Francis’s emphasis on the ad extra. But some will also wonder, with reason, what the impact might be for both the Vatican and Francis’s pontificate.

[*] This story was updated on October 13 to include information about Paul VI and Humanae vitae.