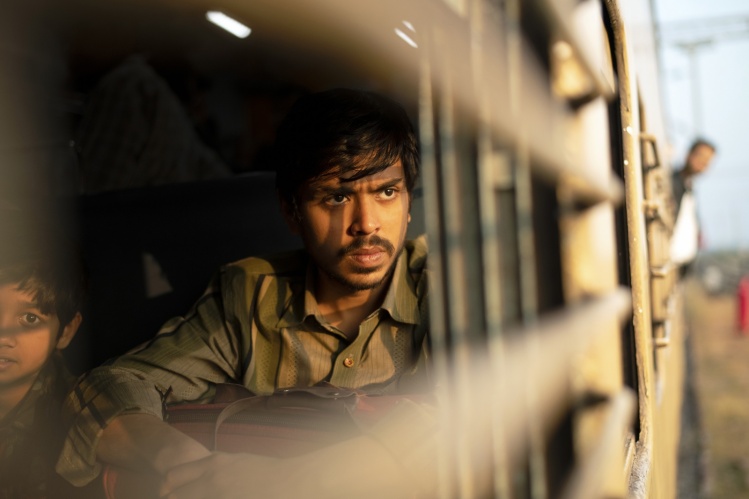 Adarsh Gourav as Balram in ‘The White Tiger’ (Courtesy of Netflix)

A dilapidated rural village, an intelligent protagonist achieving success against all odds, saccharine reflections on our common humanity: these are the increasingly recognizable ingredients of the Western genre of Indian poverty porn. Some are found in The White Tiger, the film adaptation of Aravind Adiga’s 2008 Man Booker Prize–winning novel, directed by Ramin Bahrani and now streaming on Netflix. But instead of softly focusing on sentimentality and plucky resolve, The White Tiger turns a hard gaze on India’s unforgiving social stratification and what it takes to break through it. Succeeding requires sacrifice of the type widely celebrated in Western capitalism’s concept of entrepreneurship. And Balram Halwai, the film’s slick, suede-suit-wearing protagonist, is an entrepreneur at heart.

“In the old days, when India was the richest nation on Earth, there were one thousand castes and destinies,” Balram says in voice-over near the start of the film, narrating a letter he’s written to China’s premier at the time, Wen Jiabao. “These days, there are just two castes. Men with big bellies and men with small bellies. And there are only two destinies, eat or get eaten up.” Now a resident of Bangalore, “the Silicon Valley of India,” Balram also admits that the police are looking for him—but he asks not to be judged before he has shared the entirety of his “glorious tale.” That tale begins in Laxmangarh, where as a young boy Balram is recognized for his English literacy and his intellect. His teacher promises to help him get a scholarship at a school far away, in the nation’s capital of Delhi. But Balram’s family needs money, and he is forced to drop out and work in a tea shop, fated to a life of servitude. It’s the destiny of millions of Indians who, Balram says, exist in a “rooster coop”: they passively watch one another get slaughtered, but they’re unable or unwilling to escape.

Balram’s desire to leave the coop is the film’s dramatic catalyst. Learning that the visiting American son of the village landlord needs a driver, he borrows money for driving lessons and then smooth-talks his way into the position. Upon meeting Balram, the son, Ashok, makes a snap pronouncement: “You’re the new India,” he tells Balram, part of the nation’s biggest untapped market, “waiting to surf the web, buy a cell phone, rise up to middle class.” But, he adds, without adequate resources Balram is only “half-baked.” Balram is offended, but he knows it’s true. In India, as he admits in his missive to Jiabao, there are “hundreds of millions of men like me. Open up our brown skulls and look inside with a penlight. You’ll find all these ideas, half-formed, half-correct, all buggering one another, and that is what we live and act on.”

The ordinary people trying to climb the ladder face two major obstacles: caste and the intergenerational lock on wealth and status the rich possess.
sharetweet

Soon Balram is driving Ashok to Delhi. There, in addition to contending with the city’s general, dizzying cacophony, he becomes increasingly aware of the gap between the wealth of his masters and the extreme poverty of so many others. As Ashok casually bribes politicians with millions of rupees, Balram reflects on his own monthly salary, 3,000 rupees, or around $40. At one point, his late father speaks to him in a vision: “Mr. Ashok bribes politicians in order not to pay taxes. So who is he stealing from? The ordinary people of this country. Me. And you.”

The ordinary people trying to climb the ladder face two major obstacles: caste and the intergenerational lock on wealth and status the rich possess. That status also confers a privileged cluelessness, as Ashok and his dermatologist wife, Pinky, sometimes demonstrate. The young Indian-Americans, liberal in their social values, question the relevance of Balram’s lower caste, and express anger and discomfort at the abuse endemic to the Indian servant-employer relationship. Yet that empathy is really only a veneer; the couple is often complacent in the face of Balram’s mistreatment, and at times they exploit the power imbalance to mete out more abuse. That’s reflective of today’s liberal-class politics in India: equality and mutual respect are held within sight, but just out of reach, as the resentment of the oppressed steadily mounts.

And while caste discrimination may technically be illegal in India, caste continues to dominate virtually every level of society. Balram comes from a family of sweet-makers, denoted by his last name, “Halwai”; in Bangalore, he has changed this marker of his low caste to “Sharma,” a typical Brahminical surname. The smallest of indicators reveal his place in the social hierarchy. He cannot sit on the same couch as his masters, cannot address them by name, must show respect by touching their feet. Caste and class are distinct, if overlapping, phenomena, but insufficiently addressing the difference—which India’s organized Left has historically been guilty of—has helped enable the Hindu-chauvinist government campaign to focus solely on caste representation while ignoring economic realities.

The combined wealth of sixty-three Indian billionaires is higher than the entire national budget.
sharetweet

Aesthetically, the movie mostly adheres to literalism, and the cinematographic style is sometimes akin to vérité. It fits the subject matter. Balram could be any of the hundreds of millions of people left behind in India’s globalized economy, which he himself admits. Adiga wrote The White Tiger as a cautionary tale of the effects globalization might have on India; thirteen years later, his imagined India has arrived. The combined wealth of sixty-three Indian billionaires is higher than the entire national budget, and greater access to must-have consumer goods like iPhones has conferred the illusion of material comfort among the Indian working classes. But real quality of life hasn’t improved, and the gap in wealth is only growing, abetted by Prime Minister Narendra Modi’s neoliberal agenda of social-service privatization and disastrous demonetization policies. Alas, Ashok is right: Balram is the “new India.”

The White Tiger has been compared to Bong Joon-ho’s 2019 Parasite in its sympathetic portrayal of the psychological devastation wrought by capitalism. Like Parasite, the movie builds to a plot twist meant to unsettle viewers with the gory reality of class conflict. While the films are distinct in their treatment of social issues, both advance the uncomfortable truth that in desperate circumstances, morality might be a luxury available only to the wealthy. Balram says as much: “Men born in the light, like my master, have the choice to be good. Men born in the coop, like me, we don’t have that choice.” But by the time he finishes his tale to Wen, it’s clear that Balram has shed the passivity that sustains the coop. Yellow and brown men like us will take over the world, he promises, having bought into the idea that in a ruthless, globalized economy, entrepreneurial cunning and cold-bloodedness aren’t vices, but virtues.