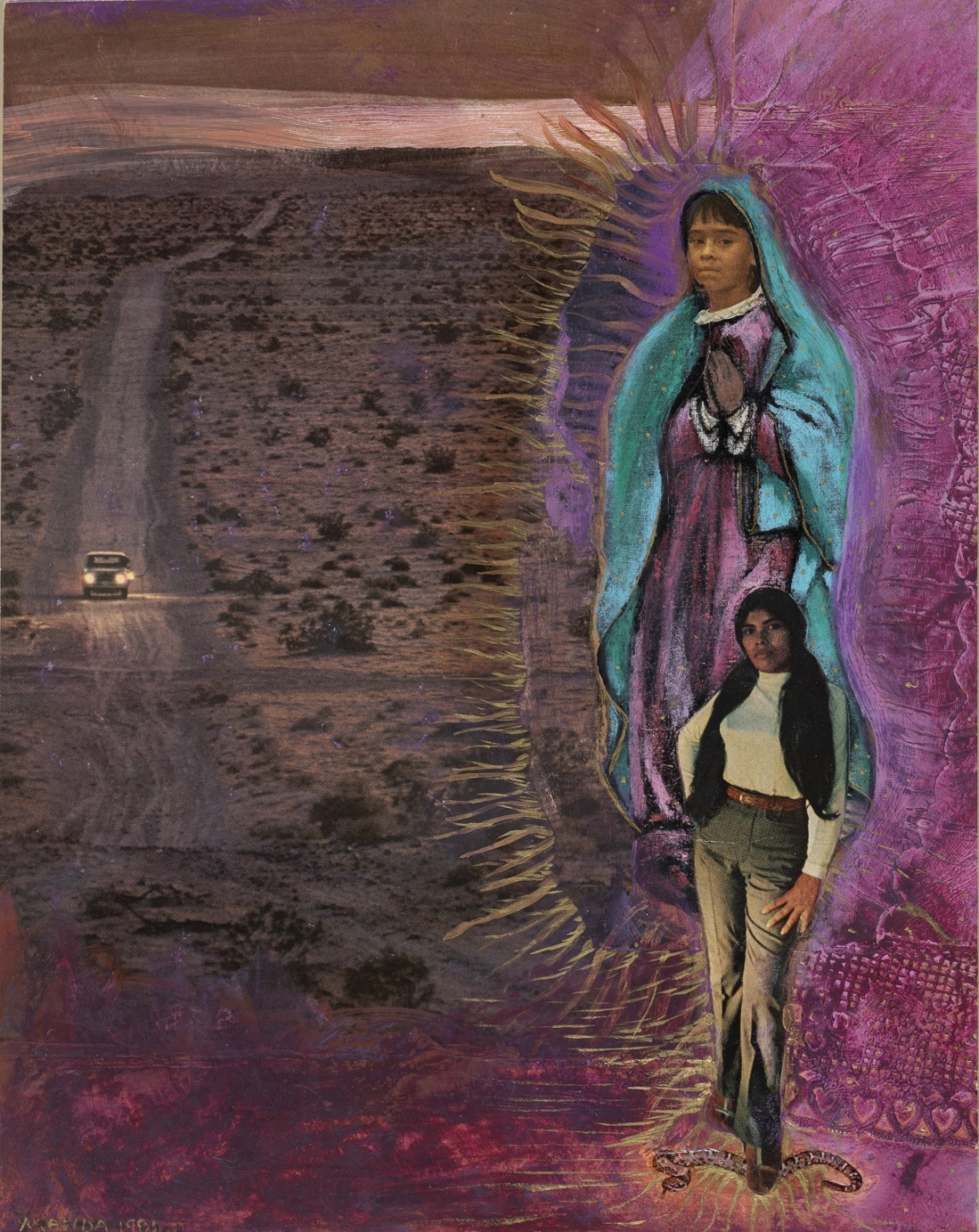 Yolanda López, ‘Virgin at the Crossroads,’ 1981 (Courtesy of the Museum of Contemporary Art, San Diego)

Chicana activist-artist Yolanda López’s 1978 Portrait of the Artist as the Virgin of Guadalupe is one of the most daring self-portraits ever painted, and also one of the most poignant. Framed within a traditional Marian mandorla, López depicts herself running straight toward us. A star-spangled blue mantle billows like a superhero cape behind her and a hot-pink floral dress clings to her frame. Disheveled hair, muscular thighs, and bright white sneakers complete her sporty look. Even more striking is López’s confident expression: eyes forward, she grins jubilantly as she strangles a snake with her hand and tramples an angel under her feet. The work is iconoclastic, but also reverent: “Because I feel living, breathing women also deserve the respect and love lavished on Guadalupe,” López once said, “I have chosen to transform this image.”

Sadly, López passed away from liver cancer complications last September at the age of seventy-eight. Her death came just six weeks before the opening of her first-ever museum retrospective, curated by Jill Dawsey at San Diego’s Museum of Contemporary Art. Though not planned as a memorial, the show paid a fitting tribute to López’s prolific legacy, showcasing her experiments with artistic form and her deep-seated commitment to social justice. It also proved that López is a first-rate artist, one whose life and work deserve to be more widely known. 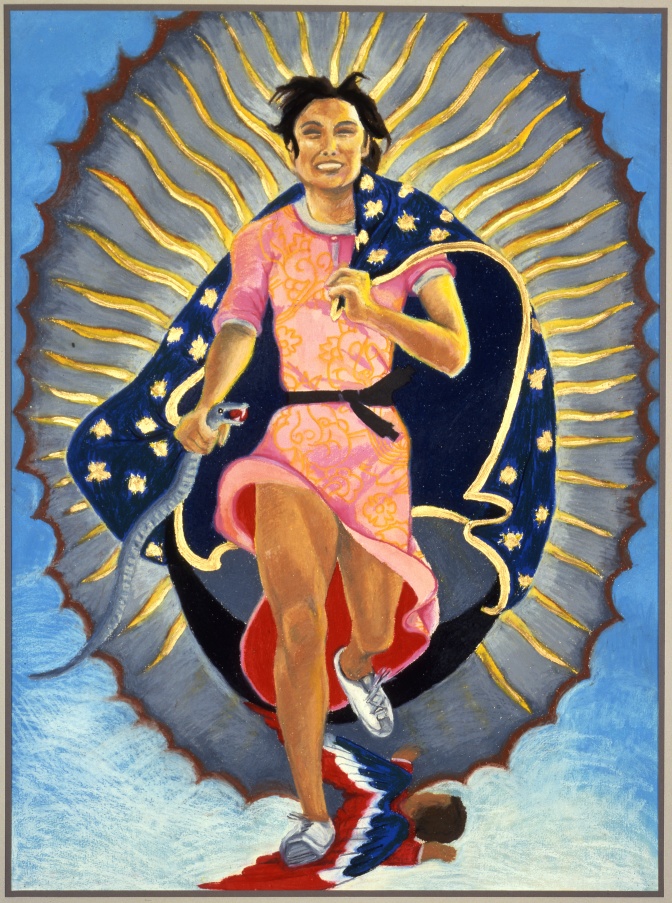 Yolanda López, ‘Portrait of the Artist as the Virgin of Guadalupe,’ 1978 (Courtesy of the Museum of Contemporary Art, San Diego)

López was born in 1942 to a Mexican-American family in San Diego. She became politically conscious of her identity in 1965, after she left home to attend San Francisco State University. There, López witnessed Black and Chicano activists striking successfully for educational and political reforms. Before long, she dropped out of school and immersed herself in community organizing, offering legal aid to Mission residents, pitching in at a community health clinic, and working as a court artist during the trial of Los Siete de la Raza, seven young Latino men accused of killing a police officer. (They were ultimately acquitted.) The work was demanding, but López’s artistic talents, galvanized by the communities she was serving, found an outlet. In a 1992 interview with Betty LaDuke, she recalled “the streets were my gallery…posters, leaflets, lapel buttons, and graphic art for neighborhood newspapers. I saw my work everywhere, and unsigned.”

After nearly a decade of organizing, López experienced a phenomenon common among young activists: burnout. She moved back to San Diego, spending more time with her family while also enrolling at the University of California, San Diego as a Ford Foundation Fellow in 1971. Her classmates included the anti-capitalist photographer Allan Sekula and the radical feminist artist Martha Rosler, leading proponents of the conceptual art movement that dominated the American avant-garde in the 1960s and 1970s. López, newly confident in her abilities, distinguished herself by eschewing objects and abstract forms in favor of human life. And not just any human life: for López, human dignity, even sanctity, lay primarily among those living at the margins of American culture. Her art accordingly invited audiences to see people the way she did.

One of the first large-scale results was Three Generations: Tres Mujeres, produced in the mid-1970s. The series of six towering charcoal drawings depicts López, her mother, and her grandmother, first dressed in their own clothes, then in each other’s. In the first three drawings, López’s mother is seated in a long dress, one arm tucked behind her back as she gazes confidently at the viewer. López’s grandmother, who wears a collared shirt and skirt, stands with her hands folded and draped across her abdomen. López herself stands in baggy clothing with one hand on her hip. Then, they swap poses. There’s no furniture or any other object in the frames; it’s as if López wants us to linger on the unique way each woman takes up space in the world, as well as the ties that bind different generations.

It’s as if López wants us to linger on the unique way each woman takes up space in the world, as well as the ties that bind different generations.
sharetweet

Besides promoting social justice, López’s activism also sought to rehabilitate female sexuality and reclaim it from centuries of stigma and shame. In My Holy Sensuality (1975), another large-scale work that mixes drawing and collage, López depicts herself seated with her hair tied back, wearing a bright orange top with black leather bell-bottom pants. Her arms are draped peacefully in her lap as small golden crosses form a halo around her head. Nothing about López’s pose is overtly sexual. But closer inspection reveals that one of her hands grasps a half-eaten apple, a reference to the biblical Eve. The posture of López’s head, tilted slightly upwards, recalls the subtle eroticism of Bernini’s famous seventeenth-century sculpture The Ecstasy of St. Teresa. Lastly, a small woman in contemporary dress, evidently cut out of a magazine, rests on López’s shoulder. The whole work seems to suggest that sexual desire, shaped as it is by religion, the Western artistic tradition, and contemporary mass media, is nevertheless ours to reimagine and possess, if we only allow ourselves to sit comfortably within our own skin.

López saw the human body not just as a vehicle of sensuality and desire, but also as an elegant machine capable of traversing space with purpose and vigor. In the series ¿A Dónde Vas, Chicana? Getting through College, López paints herself running through various parts of the UCSD campus and the city of San Diego. In one, she travels through a student-and-staff parking lot, the vitality and strength of her body standing out against the many rows of idle cars presumably owned by her wealthier white counterparts. In another work, we see López running amidst a masterfully rendered landscape, with UCSD’s brutalist buildings contrasting with the natural beauty of the San Diego shoreline and the Pacific Ocean. López’s head, hand, and foot literally exceed the frame on the right side. It’s both a fierce critique of Western artistic conventions—which usually depict the female form as a static, passive object of male desire—and a celebration of self-liberation from the world’s constraints.

In 1979, López left San Diego for San Francisco, where she would spend the rest of her life. She continued working on the Guadalupe series, and created one of her most monumental paintings, Nuestra Madre. The painting features Coatlicue de Coxcatlán, a famous Aztec stone sculpture of Mother Earth housed in Mexico City’s Museo Nacional de Antropología. With a jeweled skull for a head and a skirt of cascading snakes, the sculpture was traditionally revered as the mother goddess of the sun, moon, and stars. But here López clothes it with Guadalupe’s cloak of the cosmos, thereby synthesizing two distinct modes of religious devotion. 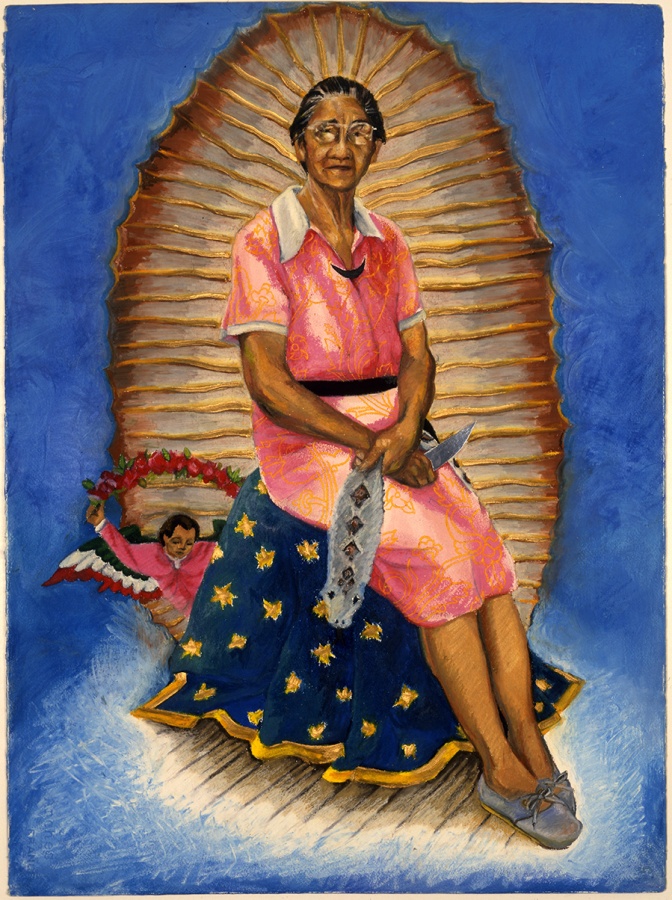 The combination proved too much for some. López’s son Río Yañez remembers how his mother was met with death threats, smashed windows, and heated protests outside her exhibitions. Viewing the painting at the San Diego show earlier this spring, I couldn’t help but think of the infamous “Pachamama” controversy that took place during the 2019 Synod on the Amazon in Rome, when an Indigenous statue of a pregnant woman blessed by Pope Francis at the bequest of an Amazonian woman was seized by angry protestors and dumped into the Tiber. The plurality of Catholic devotional forms—inevitable in a universal Church enculturated in different places—was intolerable for a few anxious conservatives.

But why? Isn’t a variety of forms honoring an ultimately ungraspable God a good thing? López certainly believed so, and devoted the rest of her life and career to fighting for everyone’s right to representation. In her final years López began producing “pocket posters,” miniature prints of her earlier paintings and sketches designed to be handed out en masse. Resembling the laminated prayer cards kept in the wallets and handbags of everyday people, these ephemera also featured confrontational messages that sought to subvert the pressures of assimilation faced by nonwhite Americans. One pocket poster features an Indigenous person posed like Uncle Sam. He points an accusatory finger at the viewer as he asks, “Who’s the illegal alien, Pilgrim?”, ironically channeling John Wayne. López conceived of the work as a rebuke to America’s “perverse and perhaps pornographic concept of the land and mother earth.” It’s also a wry reminder that there were people living here for thousands of years before the pilgrims arrived on the Mayflower.

It would be a mistake, though, to reduce the richness of López’s life and work to contestation alone. Her message was far more positive and inclusive—a fearless celebration of the divine veiled among us, present in the smallest of tasks, the littlest of things. Nowhere does this emerge more clearly than in a pair of miniatures that reproduce two lesser-known paintings from the Guadalupe series. One shows López’s mother seated behind a sewing machine, busily stitching stars onto the Virgin’s cloak; the other features López’s grandmother perched on a cloak-covered pedestal, timidly staring at the viewer. López came from a family of upholsterers and tailors. Besides honoring that heritage, the works suggest López’s reverence for the fundamental interwovenness of things. The act of sewing—deeply laborious, intrinsically time-consuming, and often collaborative—is analogous to the work of the activist who imagines a better world and seeks to create it. All of us, like single stitches in a grand tapestry, have a part to play. López, with characteristic candor and disarming simplicity, said it best: “People need to understand that they can be participants in the developing of a better society for all of us.”