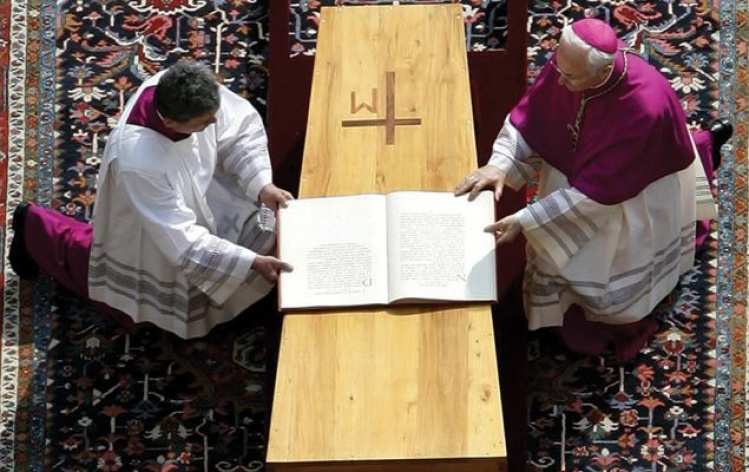 The Congregation for the Doctrine of the Faith (CDF) issued a statement in late October about burial and cremation that reaffirms Catholic teaching on the subject. It was approved by Pope Francis. It does not change any official teaching for American Catholics, who have had similar guidelines on this subject since 1997. Yet popular responses to the statement have ranged from astonishment to indignation. How dare church officials have anything to say about death and burial! It’s an outrage!

Well, not really. I mean, religions generally have ideas about such matters, don’t they? Indeed, there is a “Catholic way of doing things” when it comes to death—one that ranges from care for the dying to funeral rites to ongoing prayer for the dead and expectations of how their mortal remains are to be buried or entombed. Seen in its entirety, it forms a coherent whole. These practices and expectations are shaped by what Catholics believe.

The CDF instruction (which is very short, only eight paragraphs) contains some practical dos and don’ts, but it is basically a theological document and needs to be read as such. The disciplinary elements have been widely reported: cremation is permitted but scattering of ashes is not; keeping ashes in private homes is generally prohibited; making jewelry and keepsakes out of cremated remains is totally forbidden. These rules restrict the faithful from joining in some practices that are regarded as acceptable and even laudable in the wider culture, such as dividing up the ashes among family members or scattering them at some beautiful spot that was special to the deceased, or keeping them at home on the mantelpiece. Yet the disciplinary elements mean little if they are not grasped within the theological framework of the instruction.

That theological framework is unexceptionable. It is Christological: Christ’s death has infused death itself with new meaning for those who believe; denial of death or avoidance of reminders of death is out of place. It is anthropological: the human body is part of the person and so is to be treated with reverence even after death. The body is not a “prison” of the soul, nor can it be reduced to a token or a memento of the deceased. It is soteriological: we believe in the resurrection of the body, not in reincarnation or the dissolution of the person into the cosmos. It is ecclesiological: prayer for and with the dead is part of the common life of the church. Having sacred spaces set aside for burial or entombment encourages and reminds us to pray for those who have gone before us. It is communal in a broad sense: the death of a Christian concerns not only the individual and any living relatives, but is linked with the communion of saints that reaches beyond this present generation. “None of us lives for one’s self, and no one dies for one’s self,” for we belong to Christ (Romans 14:7). It is also scriptural: Tobit is invoked as a witness, for he was commended to God for burying the dead (Tobit 12:12). Tradition stands behind it: burying the dead is one of the corporal works of mercy.

The instruction comes at a good time. In an age when “memorials” are conducted in place of funerals, and scattering ashes has become commonplace, the emphases surrounding death have begun to change for Catholics. Nowadays sharing memories of the deceased is all important; praying for them is less so. Deciding where to scatter ashes seems like a chance to express the personality of the deceased; laying them in a grave marked with a name, less so. Besides, who wants to be buried among the dead, anyway? To “celebrate a life” and move on is more in keeping with the zeitgeist.

It is therefore a service to the faithful that the CDF should remind us of the underlying principles of Catholic faith that can and should guide our practice. Fond memories and beautiful places that evoke those memories are fine, but they are not all that matters.