Waiting by the Jesse Tree 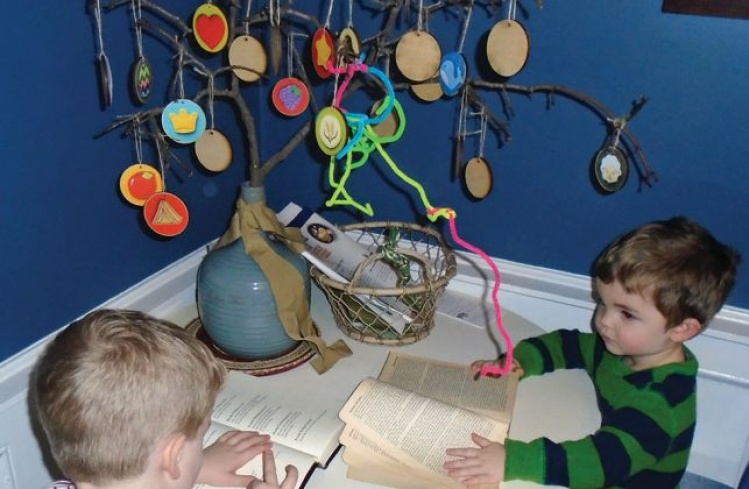 By mid-December, our calendar is full of breakfasts with Santa, town tree-lightings, and classroom Christmas parties. In the midst of all that celebrating, it can be hard to convince my kids that Advent exists at all, let alone that it’s worth trying to observe. But we have a secret weapon for making Advent real. It’s called a Jesse Tree.

The Jesse Tree is a kind of spiritual genealogy of Jesus, named for Jesse, the father of David, from whose line the Messiah was prophesied to come. Each day of Advent we tell the story of a biblical person or event that prepared for the coming of Christ, and hang a corresponding ornament on our tree. I learned about the tradition in elementary school, when our teachers would gather us into the hallway to sing about waiting by the Jesse Tree to welcome the king of kings and his reign of peace. It gave me an appreciation for Advent, a strong sense of salvation history—not that I’d ever heard the term—and a familiarity with important figures in the Old Testament. Those who badmouth the catechesis of the 1980s clearly never saw the IHM sisters of Scranton in action.

That was the last place I ever saw or heard of a Jesse Tree, aside from in parishes that use the term for their collections of gifts for the needy. But last year I decided I wanted to mark Advent by making one of my own. With three boys under five, I knew I had to keep my expectations low, but I figured they were so little that if we failed miserably they’d never remember it by next year anyway.

There’s no set Jesse Tree curriculum, but a little searching online led me to several suggested guides, which I mixed and matched from as we went along. Preschoolers prefer animal adventures to prophecies, so for now Jonah and Daniel in the lion’s den take priority over Hosea and Habakkuk. I found a lovely set of ornaments for sale on Etsy (handcrafted, just not by me). As for the tree itself, at last my four-year-old’s habit of dragging home large sticks and branches paid off. Here goes nothing, I thought, as I stuck our bare “tree” in a stoneware vase and began that first night with “In the beginning....”

There were some challenges. Have you ever noticed how many stories in the Bible feature the slaughter of little boys? But I did tell a story each night, editing where necessary, and the boys took turns picking out the appropriate ornament and fighting over the best spot to hang it. We ended with a chorus of “O Come, O Come, Emmanuel.” And—honestly—the kids were enchanted by the whole strange thing. The four-year-old and two-year-old hung on every detail of the stories, and the baby tried to join in singing. They were turning into little Bible nerds before my eyes, and I was scrambling to keep up, reading ahead after they were in bed so I would be ready for their questions tomorrow.

As the stories piled up, we drew the connections together—each time they heard about “the God of Abraham, and Isaac, and Jacob,” we recalled who those men were. I also tried to make sure that they weren’t hearing only about men—we talked about Abraham and Sarah, Moses and Miriam. But I found that the uneven gender representation in the Bible isn’t something I could paper over without distorting the stories themselves. Even the tales of women like Ruth and Esther, who claim their own branches on the tree, are wrapped up in sexism that can be hard to contextualize for preschoolers. Grappling with the text was frustrating, but also rewarding, a Bible study I wouldn’t have undertaken otherwise. The Jesse Tree worked its magic on me too.

Well, a year later, my kids have indeed forgotten the whole thing, but I couldn’t wait to start all over again. Observing Advent no longer feels like a vain struggle to block out untimely cheer. I am no longer worried that our home looks bare and joyless when every other house on the block has lights on the door and a tree in the window. Come inside—be careful, the floor is a mess—and see our Jesse Tree, unlit but lovely. Thanks to its enchanting presence, Advent in our house isn’t just an empty space that needs Santa to fill it. Now the waiting itself has a shape.

Who does the NRA really speak for?