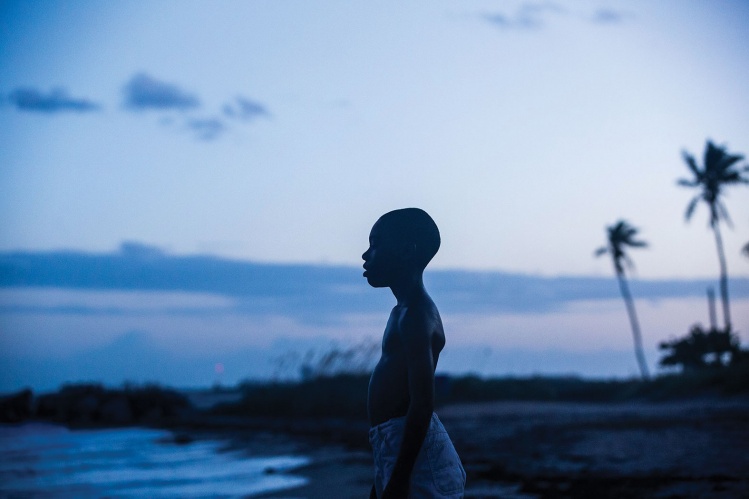 Moonlight is a blazing iceberg of a movie. Blazing because of the passion that informs every shot, an iceberg because so much of its meaning resides beneath the surface events on screen. This is a film of Jamesean ambiguity, though Henry James wrote of American millionaires and heiresses touring Europe, while writer-director Barry Jenkins sets forth a story of African Americans in a Miami neighborhood teetering on the edge of squalor. The rewards for a viewer’s close attention to every scene and shot are the same as those for any patient reading of James’s serpentine sentences: images get planted in the mind that gradually link up to form a picture of the hero’s destiny.

Jenkins breaks his story down into three chapters, titled “little,” “chiron,” and “black.” In the first we meet Chiron (pronounced Shy-RON), a child of ten or eleven who is stuck with the nickname “Little” because of his size and timidity. (The boy who plays him, Alex Hibbert, has eyes as big as supermoons.) Home holds no emotional relief from the schoolyard bullies who torment him: his mother Paula alternates between spasms of possessiveness and bursts of fury, and her later descent into drugs and prostitution ratchets up the misery. Then an Afro-Cuban drug dealer, Juan, takes the boy under his wing. In any conventional movie, Chiron would soon become the man’s messenger boy and apprentice dealer, but something very different happens here. Juan and his girlfriend Teresa behave like the best of adoptive parents as they feed, shelter, and nurture the kid, with no strings attached. Though Juan occasionally dispenses wisdom that is strictly gangsta—never sit with your back to the door, for you never know who’s coming in—another bit of his advice is shrewd and reverberates throughout the rest of the movie: “You’re gonna have to decide for yourself what you want to be. Nobody’s gonna do that for you.” And this mysteriously links up with a curious anecdote Juan recalls from his own childhood: as a street kid he often roamed about at night, and an elderly lady dubbed him “Blue” because that was the color his skin appeared to be in the moonlight. (The film is based on a Tarell Alvin McCraney play titled In Moonlight Black Boys Look Blue.) If that nickname was the result of an optical illusion, isn’t the “Little” that his peers have pinned on Chiron just as superficial? The boy may be physically slight, but how large is the spirit within him? Enough to overcome the label?

Juan is a brawny man, and the actor Mahershala Ali endows him with an easygoing vitality that reminded me of Robert Mitchum in his prime. So you can understand why the drug dealer looms up as a role model for the boy he treats kindly. How much more poignant it is, then, when this father figure falls from grace. And the fall is bound to come once Chiron comes to connect his mother’s erratic behavior with the crack she’s smoking, which is supplied by Juan. Certain ambiguities in the script actually amplify the poignancy rather than cloud it. For instance, when exactly does Paula become a prostitute and addict? In her initial scenes she seems sober enough, but soon she’s hustling her son out of their apartment so she can turn her next trick. Have we ever really seen her sober? But this ambiguity makes us share Chiron’s confusion. Even when he hadn’t yet identified drugs as his mother’s problem, he’d already seen her as a bewildering, withholding figure (though Naomie Harris’s superb performance mitigates her character’s bad mothering with believable pathos). As for Juan, does he never beat people up or even kill them in pursuit of his trade? That we aren’t shown Juan’s sinister side actually strengthens the drama because it forces us, for a while, to share Chiron’s rosy view, making it all the more sad when the truth finally sinks in.

THE SECOND SECTION of the film is titled “chiron.” Since that is our protagonist’s real name, this might seem to signify that, now an adolescent, he’s growing into and firming up his identity. Alas, it does not. No mentor is now at hand. Juan has disappeared. (Another ambiguity: when Paula remarks that she hasn’t seen Juan’s girlfriend “since the funeral,” are we to assume it was Juan’s?) Chiron, now played by Ashton Sanders, has grown into a tall, stringy teenager but he’s still called “Little” by a bully, Terrel, who seems to have made it his mission to torment the outsider. And Paula, still heavily into drugs, snatches away his pocket money and makes him feel smaller than ever. Only Kevin, Chiron’s only friend, shows him any support or affection. Eventually the friendship becomes sexual.

And here again an ambiguity makes us share Chiron’s confusion. Kevin has always come across as very straight, but was all his boasting about the girls he’d conquered a front? Is he really attracted to Chiron, or is their physical intimacy just a one-off gesture of pity? Chiron can’t figure it out any more than we can, but there’s no ambiguity about his desperate need for somebody to stand by him.

That need is betrayed when Kevin, during a sort of informal gang initiation instigated by Terrel, punches Chiron out. School authorities want the victim to report the perpetrators, but Chiron won’t denounce Kevin and instead takes his own brutal revenge on Terrel, a violence that lands him in juvenile detention and changes his life forever. These episodes are saturated with a sense of doom that the director achieves with camera movement and music. As the bully Terrel moves toward his brutal mischief in the schoolyard, the camera stays on him in one lengthy traveling shot as he distributes fistbumps to pals, threats to rivals, and insults to victims, striding relentlessly onward as the music swells ominously. A couple of scenes later, it is the battered Chiron we see in relentless motion, as he heads for a classroom where Terrel sits and again the music warns us of impending violence.

In the third chapter, “black,” the film reaches, tentatively but tenderly, for healing and renewed growth. “Black” is the nickname that Kevin once gave Chiron when they were still little kids. The macho tag was meant to rebrand someone who was taunted as a sissy. But the adult Chiron (now played, with stony reserve, by Trevante Rhodes) no longer needs such help: he’s now a gym-buffed, glowering drug dealer in Atlanta. We see him conduct his business with an underling, and his sleepy strength is pretty frightening. But a phone call from Kevin, from whom he hasn’t heard since the classroom violence, brings him back to Miami, where he establishes a new relationship with Paula (now so deep into rehab that she’s more of a counsellor than a patient), then comes face to face with his only friend and worst betrayer. This confrontation, in the diner where Kevin cooks, is composed of small talk that says nothing, and stares, silences, grins, and grunts that say everything. Both men are reaching for each other through a thick cloud of mutual unknowing. Kevin (slyly underplayed by André Holland) has achieved a relatively normal life with a fair share of happiness derived from fatherhood. Yet something gnaws at his spirit, and he can only guess that it has something to do with his betrayal of Chiron all those years ago. How can he make amends to the silent man sitting in front of him, who says so little even in reproach? As for Chiron, he may only now be discovering how much Kevin shaped his destiny. The viewer who comes to this scene expecting the sort of resolution in which the hero’s recognition of his repressed homosexuality gives him a new lease on life will be disappointed. No such easy answers here. Instead, there’s a wealth of compassion, and a hushed apprehension of the minefields unavoidable in every human life. Wordsworth wrote, “The child is father to the man.” Moonlight shows us that a desolated child may be father to a stifled man.

Birds on a Branch