A Chat with Pope Francis 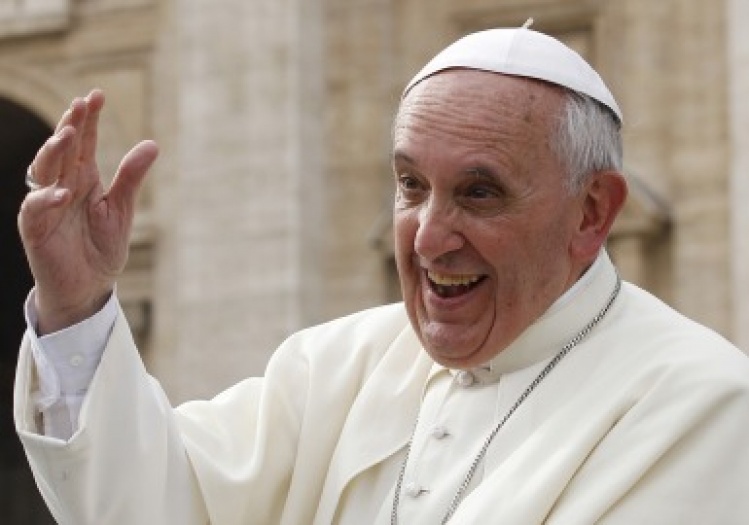 Commonweal presents an unprecedented exclusive: Pope Francis’s first interview with a lay Catholic publication. The transcript of the editors’ conversation with the pope has been translated from the original Italian into Latin, then English, and then back into Italian, and then discarded and reconstructed from memory.

CW: This seems like an awfully…informal location for an interview with a pope.

PF: Ah, Roma Termini, I come here to meet the people. [Aside] Such a beautiful baby! May I kiss? Also, the number sixty-four bus goes from the train station right to the Vatican. Very convenient, but watch out for pickpockets.

PF: Eh, they don’t need to know everything.

CW: You seem like a hard man to keep up with.

PF: I like to talk with people. I suppose there is always the danger that I may say something I will regret. After all, that is why my predecessors stuck to speeches and carefully orchestrated encounters with the press: to prevent embarrassing gaffes. You can see how well it worked.

CW: You may have heard that there is some consternation among conservatives in the American church about your recent pronouncements, and how different your style is from the previous pope’s—

PF: Pope Benedict, yes, he was a wonderful man and everything he did was exactly right.

CW: And yet you’re quite different.

PF: I can’t help it, I am just so undisciplined, you see. I picked up so many bad habits in my Jesuit days. If only I were less naïve, I would stop myself from talking to disaffected Catholics in such a friendly way. It gets their hopes up, or so I am told.

CW: Some conservatives are worried you’ll undermine the teachings of the church by appearing to downplay doctrinal orthodoxy.

PF: It would certainly be a shame to deflect attention from the church’s teachings on homosexuality and birth control—just when they were catching on!

CW: There has been some confusion about the accuracy of your reported conversation with the Italian journalist Eugenio Scalfari. Did you really say that “the court is the leprosy of the papacy”?

PF: Was I too mild? I thought I was just saying what everyone was thinking.

CW: It seems unlikely that everyone agrees with you.

PF: Maybe not. This is why I have assembled a new group of cardinals to advise me; I’m hoping that they will tell me what people are really thinking. Some say this is dangerous, because my job is to tell people what they ought to think. Something about giving in to the dictatorship of relativism. But figures of speech about “dictatorships” don’t get very far with me. So I will listen, maybe I will hear something interesting. Maybe a good joke. I do like jokes.

CW: Have you received much resistance to your plans to reform the curia?

PF: Well, there was the time somebody passed me a zucchetto with a note inside. It said “Back off or else,” and it was composed of letters cut and pasted from L’Osservatore Romano.

PF: I blessed it and tossed it back. As for the curia, let them complain. There are plenty of parishes in mission territory that need priests.

CW: That’s awfully blunt, even for you.

PF: Ah, but this is for Commonweal, yes? No one at the Vatican will read it.

CW: Can you say more about your thoughts on women in the church?

PF: Oh, women, women, they are so important. The church herself is a woman, yes? And that is why women are really so much better than men, forgive me if I speak plainly! Without its women the church is like a bumblebee at the post office, as we say in Argentina. We must talk about women very much, in Rome and everywhere. Maybe we should even talk to women. That is how important they are.

CW: And the possibility of ordaining women to the priesthood…

PF: Not a chance. Next question.

CW: Have you given any thought to what you might do about the damage from the sex-abuse crisis?

PF: Is that still going on?

PF: You know, when bishops come to see me they never bring it up. Surely they would want me to know if it were still a problem. I keep waiting for them to talk about it.

CW: Maybe you should try asking someone else?

PF: Hmm. I might just do that. As we say in Rome, stranger things have happened.

CW: Do they say that in Rome?

From the Archives: Commonweal on John F. Kennedy