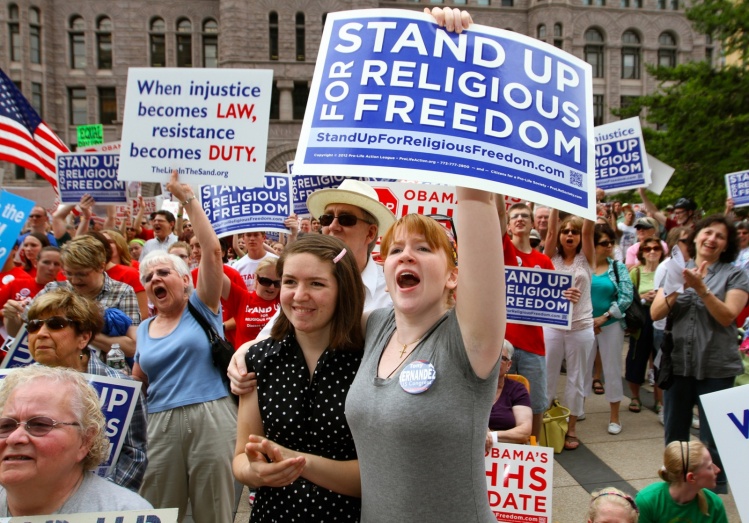 Demonstrators during a 2012 rally in downtown Minneapolis (CNS photo/Dave Hrbacek, The Catholic Spirit)

The campaign for religious liberty has defined the bishops’ disposition to political power during the past decade. Now there are signs that the United States Conference of Catholic Bishops has ushered in a new phase of its fight for religious liberty. Not only did it recently submit a brief to the U.S. Supreme Court declaring that President Trump’s ban on migration from five Muslim countries was “blatant religious discrimination”; a few days later it announced that its annual “Fortnight for Freedom,” launched in 2012, will become “Religious Freedom Week”—lasting half as long as before.

It will be interesting to see if and how the U.S. bishops’ interpretation of the conciliar declaration on religious liberty, Dignitatis humanae (1965), will develop. The foundational statement of the USCCB’s religious-liberty mobilization—Our First, Most Cherished Liberty (2012)—proudly claimed that “the landmark teaching of the Second Vatican Council on religious liberty was influenced by the American experience. It is among the proudest boasts of the Church on these shores. We have been staunch defenders of religious liberty in the past. We have a solemn duty to discharge that duty today.”

But the approach to religious liberty in Our First, Most Cherished Liberty is more legal than theological. This was partly because of the bishops’ decision to fight the Obama administration in court, but it is also typical of the minimalist reception of Vatican II embraced by many prelates in the United States. There remains a certain discomfort with the theology of religious liberty because it underscores discontinuities in the tradition that many bishops would like to minimize or deny altogether. But the obvious theological differences between Dignitatis humanae and, for example, Pius IX’s Syllabus of Errors (1864) or the Holy Office’s silencing of John Courtney Murray, SJ, in 1954 and 1955 constitute a problem for those who insist that there were no doctrinal changes at Vatican II.

There has also been an important change of political context in the years since Our First, Most Cherished Liberty was issued. Not just the jarring change from Obama to Trump, but also the related rise of anti-liberalism, from which Catholics in this country and elsewhere have not been immune. Anti-liberalism often goes together with a rejection of the idea that historical development in religion can be a good thing. Catholic anti-liberals would still deny, in the early twenty-first century, that on some issues—for example, religious liberty—Catholics have made theological progress during the past century, a progress reflected in changes of doctrine.

The bishops can no longer afford to ignore the theological dimension of religious liberty, since it is precisely this dimension that has lately been thrown into doubt. There are some indications that the change from “Fortnight for Freedom” to “Religious Freedom Week” might reflect a change of emphasis in the initiative. In an interview with Crux’s John Allen, Archbishop Joseph Kurtz, president of the USCCB from 2013 to 2016 and now the head of the bishops’ permanent Committee for Religious Liberty, explained that the change is not just in the duration of the mobilization effort. Kurtz said Religious Freedom Week will be less exclusively focused on the domestic scene and more aware of religious liberty as a global issue. This is an important point because it addresses, albeit indirectly, the relationship between the church’s commitment to religious freedom and its global reach. Kurtz pointed out that young people tend to take for granted the right to religious liberty. It is an open question whether they understand this right in the context of other modern rights, about which they may also be complacent. There are worrying signs of “democratic indifference” and disengagement among millennials.

A convincing Catholic doctrine on religious liberty could not be retrieved simply by going back to the early church; it had to be drawn from modern experience, and it was.
sharetweet

One reason religious liberty is a particularly sensitive issue in this period of continuing transition from Benedict XVI to Francis is that Benedict always stressed ressourcement in his interpretation of the Second Vatican Council. But the mechanism of ressourcement—renewal through a return to the sources of the tradition—could not really be applied to the Catholic Church’s doctrine on religious liberty in the same way it could be applied, for example, to liturgy or ecclesiology. A convincing Catholic doctrine on religious liberty could not be retrieved simply by going back to the early church; it had to be drawn from modern experience, and it was. But in his famous speech on the two hermeneutics of Vatican II (December 22, 2005), Benedict XVI defended the continuities between Dignitatis humanae and the “deepest patrimony of the Church.” In his commentary on the third period of Vatican II published in 1965, then conciliar peritus Joseph Ratzinger talked about the embarrassing situation of the church needing to be lectured by the secular world about the requirements of religious freedom. In a recently published letter sent in 2014 to the Italian philosopher Marcello Pera (with whom cardinal Ratzinger had co-published a book before being elected pope), the pope emeritus, while anchoring the Catholic understanding of human rights to a Christian anthropology, also distanced himself from the anti-liberal idea that the church somehow compromised itself by recognizing modern human rights. The church’s transition on this issue, then, is evinced in the thought of Benedict himself.

The bishops and periti at Vatican II had a very direct experience of the suffering of Christians under Communism. Unfortunately, today the martyrdom of Christians in non-Christian countries has also become one of the “signs of the times.” The Second Vatican Council saw globalization on the horizon and understood what this would require of Catholicism. Today, more than fifty years later, the issue of religious liberty is not just about the impracticality of Catholic confessional states. It is also about solidarity with oppressed Christians in countries where they are a minority, as well as with non-Christian minorities living in Christian countries.

The issue of religious liberty is important in American Catholicism today because the pontificate of Francis coincides with the resurgence of Catholic traditionalism and Catholic anti-liberalism. Historically, Catholic confessional states like Italy and Spain did not protect the religious liberty of non-Catholics until the mid-twentieth century. And there are some who would like to return to this prior state of affairs, regarding Dignatis humanae as a deviation from the tradition, or proposing revisionist readings of that document that would minimize its support for religious liberty. In fact, Dignitatis humanae, along with the rest of Vatican II, makes a fundamental preferential option for democracy, for pluralism, and for freedom—in Latin: favor libertatis. Nor were these values simply shoehorned into the Catholic tradition; they arose from the heart of Christianity.

Dignitatis humanae rejects confessional authoritarianism unequivocally: “Government is to see to it that equality of citizens before the law, which is itself an element of the common good, is never violated, whether openly or covertly, for religious reasons. Nor is there to be discrimination among citizens” (par. 6). Catholics who support religious freedom for themselves cannot be indifferent toward threats against the religious freedom of non-Catholics and non-Christians in the United States or abroad. President Trump’s recent executive order protecting religious organizations from government overreach must be examined in light of his prejudicial statements about Islam. As Dignitatis humanae makes clear, religious liberty is by definition universal. It is not an idea that can be pulled out of storage when Catholics need it, only to be locked back up when the Muslims arrive.