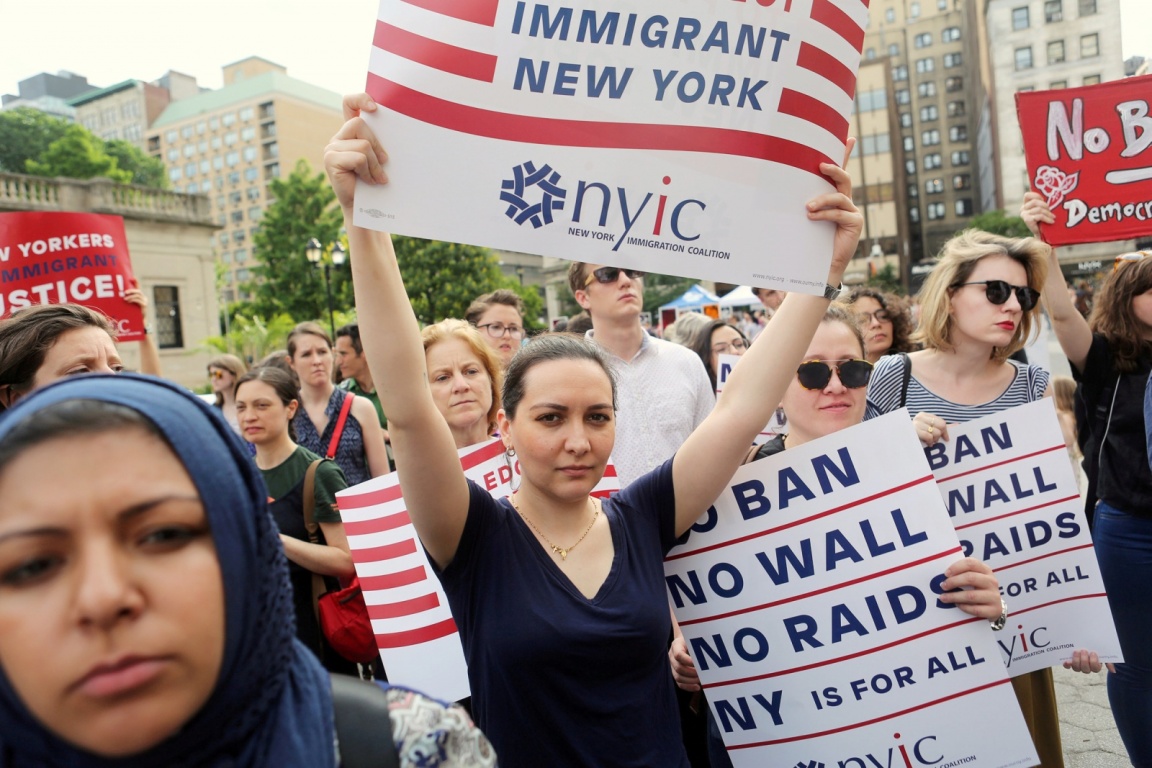 The Bishops’ Brief Against the Ban

The U.S. Catholic bishops submitted a brief to the Supreme Court declaring that President Donald Trump’s ban on migration from five Muslim countries was “blatant religious discrimination”—and the lawyer representing opponents of the measure reminded the justices of that line in oral arguments held Wednesday.

Attorney Neal Katyal referred to the bishops’ strongly worded friend-of-the-court brief as Justice Samuel Alito pressed him for evidence that a “reasonable person” would view Trump’s proclamation as discriminating against Muslims.

“This is a ban that really does fall almost exclusively on Muslims,” Katyal said. “…Look at the wide variety of amicus briefs filed in this case from every corner of society, representing millions and millions of people, from the U.S. Conference of Catholic Bishops, which calls it, quote, ‘blatant religious discrimination’”—

He was cut off, but the point was made before a court with five Catholic justices and one Episcopalian who was raised Catholic, Neil Gorsuch. The bishops’ brief cited Trump’s anti-Muslim tweets as evidence that the president’s order “arises out of express hostility to Islam,” and violates the First Amendment’s free exercise clause.

“Such blatant religious discrimination is repugnant to the Catholic faith, core American values, and the United States Constitution. It poses a substantial threat to religious liberty that this Court has never tolerated before and should not tolerate now,” the brief says. “Having once borne the brunt of severe discriminatory treatment, particularly in the immigration context, the Catholic Church will not sit silent while others suffer on account of their religion.” 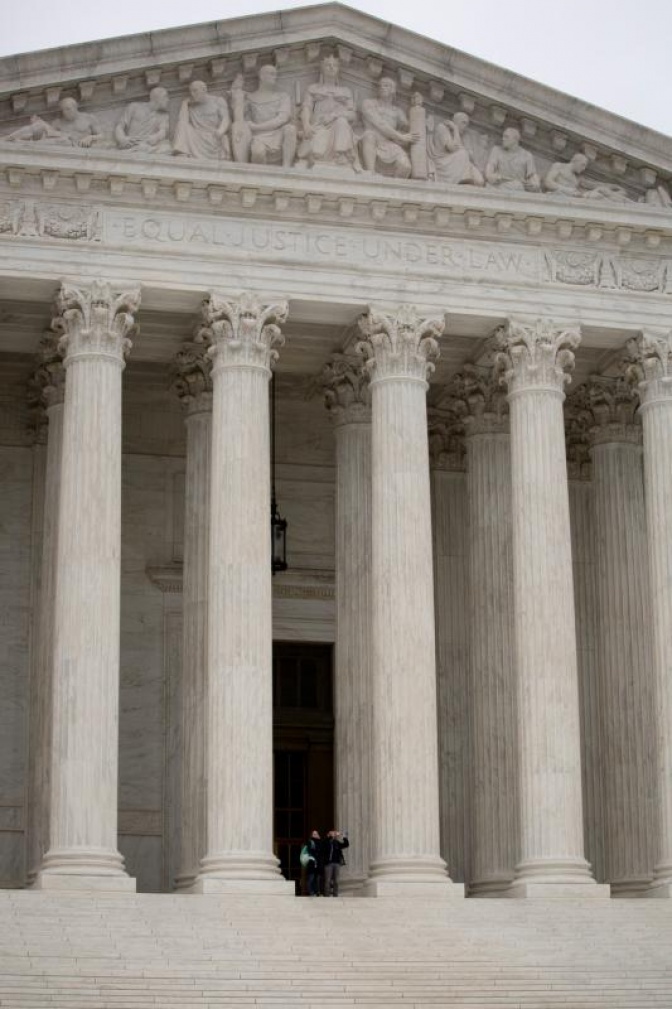 Much of the news coverage of the hearing took the justices’ questioning as evidence that the court’s five-member conservative majority would rule in Trump’s favor. On the face of it, the justices need to decide if the core element of the Immigration and Nationality Act of 1965—abolishing discriminatory national-origin quotas passed in the 1920s—is trumped by a paragraph in the same law that, if the Trump administration is right, gives the president unlimited power over who can enter the country.

Whether the religious discrimination argument will move the justices in this case remains to be seen—and it’s best not to speculate on a justice’s thinking based on his or her questions.

But however the court rules, the USCCB’s brief is important in staking out an authentic Catholic position on Islam and immigration at a time when many anti-Islam voices are able to find a platform in Catholic media and institutions. And it counters the bishops’ past failures to include discrimination against Muslims as a cause for their campaign for religious liberty, as seen in the statement “Our First, Most Cherished Liberty,” which was issued before the 2012 presidential election. With a few exceptions, Catholic institutions were slow to respond to the nativist strain in Trump’s 2016 presidential campaign, and the first nativist president was elected with a majority of the white Catholic vote. More recently, the USCCB released a statement in February 2017 urging Trump to fulfill his promise to protect religious liberty—but without mentioning his plans for immigration or his anti-Muslim comments.

In contrast, the legal brief filed in the travel ban case speaks loudly. It contains a primer on Catholic teachings on Islam, immigration, and the historical experience of American Catholics. It notes that the Second Vatican Council explained in Nostra aetate that the church holds Islam and Muslims “in esteem.” It says that the mandate to welcome migrants “is deeply rooted in Catholicism,” citing Scriptural passages (Exodus 23:9; Matthew 8:20 and 25:35; Romans 12:13). It quotes remarks Pope Francis made on his visit to the United States, as well as statements Pope Pius XII and Pope John Paul II made about the need to welcome refugees. And it provides a history of anti-Catholic discrimination, dating to colonial times, concluding, “Catholics’ own experience with discrimination in the United States informs the Church’s commitment to advocating on behalf of migrants and refugees of all religious faiths.”

Katyal referred to that in the oral argument. “The heart of the First Amendment is about immigration restrictions on, for example, Catholics at the founding, and our protest of King George, which was all about using the immigration power to exclude people of a different faith,” he said.  “And that’s what our Constitution is about.”

If the Trump administration wins it case before the Supreme Court, it will allow the president to re-create, by proclamation, his own system of national quotas.
sharetweet

Solicitor General Noel Francisco denied that the travel ban resulted from bias on Trump’s part—he said at one point that Trump “has praised Islam.” According to Francisco, the ban resulted from a thorough, country-by-country review by multiple government agencies using “neutral criteria.” The countries that were barred had failed to provide information needed for national-security purposes, he said, adding that many predominantly Muslim nations had complied and were not included in the ban. Under the current configuration, the presidential order would bar visas to travelers from five countries where the population is more than 90 percent Muslim—Iran, Libya, Somalia, Syria and Yemen—as well as North Korea and Venezuela.

Historically, the Catholic Church, Catholic politicians, and Catholic organizations have played an important role in the American immigration debate, given the prejudice against Catholics arriving from Ireland, Germany, Italy and other European countries. The first Catholic president, John F. Kennedy, pushed for the exclusionary immigration laws of the 1920s to be reversed, and that was accomplished after his death with passage of the Immigration and Nationality Act of 1965.

It was a watershed moment when Congress ended immigration quotas based on national origins—measures rooted in racist, eugenicist, Klan-supported claims that the immigrants flooding into America early in the twentieth century from Italy and eastern Europe were from an inferior stock that could never become truly American. If the Trump administration wins it case before the Supreme Court, it will allow the president to re-create, by proclamation, his own system of national quotas.

It is worth going back to October 3, 1965, when President Lyndon Johnson signed the new immigration law.

Johnson called it “one of the most important acts of this Congress and of this administration. For it does repair a very deep and painful flaw in the fabric of American justice. It corrects a cruel and enduring wrong in the conduct of the American Nation.”

He called the old laws “un-American in the highest sense,” and added: “today, with my signature, this system is abolished. We can now believe that it will never again shadow the gate to the American Nation with the twin barriers of prejudice and privilege.”