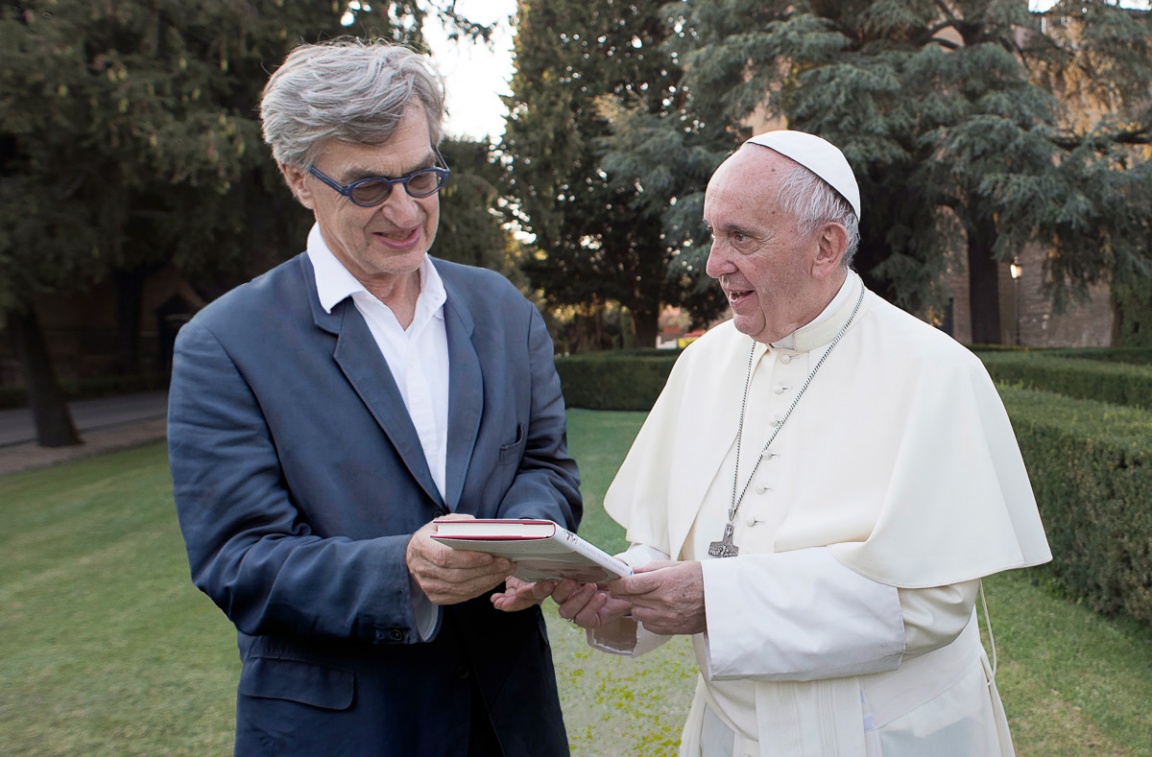 Worthy of His Name

In May Commonweal hosted an advance screening of Wim Wenders’s new documentary, Pope Francis: A Man of His Word. Wenders had just arrived in New York for the film’s U.S. opening and kindly agreed to answer a few questions from Commonweal’s senior editor, Matthew Boudway, at the end of the screening. The following transcript of their conversation has been edited for clarity and length.

Matthew Boudway: I’d like to start by asking how this film came to be in the first place. Whose idea was it? What interested you in the project? I know you’re not a practicing Catholic but this seems to have had a personal importance for you.

Wim Wenders: Let’s start with the last question: I’m a practicing Christian, with a Catholic upbringing. I was a Presbyterian while I lived in America, and now I am an ecumenical Christian. I try to live the best of everything—a combined Protestant and Catholic in one person, and I tell you it’s possible.

The film started in quite an unbelievable way, because it never crossed my mind that I could make a film with the pope. I had watched, like probably most of you, that night when he was elected. Nine years of Latin allowed me to understand the message saying he had chosen the name of Francis. “Wow,” I thought. “That takes guts. That is a loaded name.” And no pope before him dared to take on that name. So I was interested from the beginning. And I laughed when he addressed the crowd, the whole square, saying the cardinals had gone almost to the end of the world to find a new pope.

I hadn’t imagined his eyes to be so kind and so alive and so awake and so powerful.
sharetweet

He had my attention. But I didn’t think I could make a film with him. We just don’t think of the pope as being available for a movie. Until one day—it was still in the first year of his papacy, the end of 2013—I got this letter with a fancy letterhead. It was from the Vatican. Would I consider talking with them about the possibility of a film involving Pope Francis? Whoa. I took a deep breath and I answered, “Yes, I would consider it. I’d like to talk with him about it”—because I needed to find out what was behind this. I couldn’t make a commissioned film produced by the Vatican. That isn’t what I do. Then I talked with them, and it turned out that was not at all what they had in mind. They just wanted to initiate the idea, probably because they realized nobody would ever think of it. They said, “If you are inclined to do this, and if you have the time in your life and a desire to do it, then we’ll make everything possible. You’ll have access to the pope and to our archives. But you’re going to have to put together an independent film. We are not going to produce this—that is not at all our intention. It has to be an independent production, and you’ll have to deal with it just like any of your other documentaries. You’ll have to write it, finance it, produce it, distribute it. We keep out of everything. We just wanted to plant the idea, the seed.” Well, that sounded good, and that’s what I did. It took a while. Even sort of writing it all, writing a concept for it. I realized this carte blanche they had given me was wonderful, but the downside was there were no parameters whatsoever. The possibilities were too wide and it was scary, and I realized there was a lot of responsibility attached to that. But they kept their word. They didn’t interfere, not even with the concept. I showed it to them eventually, and they said, “Good, we like it.” But from the beginning they said, “You do the film you want to do.” So I was left to my own devices.

I had the opportunity to meet Pope Francis four times. Each time I’d devote a good solid two hours and after that we’d pause. We were both exhausted because it was intense. Quite spontaneous and courageous on his part. There was no question he refused to answer. He was fully present. There were no mobile phones or other agendas, there was no assistant who wanted anything else. He was there alone and faced our camera.

And I also shot a little bit in Assisi. We made some reenactments from the life of St. Francis because, when I first saw Pope Francis and realized he was living up to his name, I felt I had to share that with the audience—what that name meant. And looking at all the films that have been done about St. Francis, I realized I couldn’t really quote any of them. I mean there were quite a lot—ten or so, including silent movies. The last one had Mickey Rourke as St. Francis—it was strange to see St. Francis with all these tattoos. So I realized I had to do it myself, and that was part of the concept: we filmed these little moments to represent the life of St. Francis.

MB: As I was watching this film the first time, something struck me very forcefully. Like everyone probably, I thought I already knew what Pope Francis looks like because I’ve seen so many photographs of him. And yet, watching your film, I felt as if I were seeing him for the first time, because all those images I’d seen before were still images. When you see him in the film, you see his eyes and you see his face in movement, and how expressive that face is. Later I heard you say in an interview that you decided it was the pope’s eyes that held the film together. Is that something you discovered while you were making the film, something that became part of your method, or is that something you discovered only afterwards?

WW: Well, there is what you can imagine and there is what you can realize only when it’s there. When I imagined having the privilege to be face to face with the pope, I did think, “I don’t want to have that only for myself. I want to shoot that in a way that he’s not just looking at me. I want to share that privilege [with the audience].” So I decided to shoot it in a way that allows all of you to be face to face with the pope. We shot this with a sort of reversed teleprompter thingy [an interrotron]. It didn’t show him his answers like a newscaster’s would. He saw the living question—me asking the question on a screen—and spoke to me directly. Only, I was little ways off. He saw my face on that screen and teleprompter and the camera was shooting through it, so he was answering through my eyes directly to all of you. When I explained this all to him, his only worry was “What do you see?” And I showed him my place, a little behind the camera, and he realized I was in the same situation he was in. So he liked the idea. And he was totally committed then to this situation. It was very intense. He didn’t see anyone else but me. All the crew had disappeared. But with this device I could actually share his eyes with the audience.

He has this amazingly powerful look when he talks—not just to me but to anybody. My entire team was struck by that look, because he greeted everybody, not just director and producer but everybody, including the electrician.
sharetweet

To answer your question, you can imagine something ahead of time but then it’s actually there, and I hadn’t imagined his eyes to be so kind and so alive and so awake and so powerful. He has this amazingly powerful look when he talks—not just to me but to anybody. My entire team was struck by that look, because he greeted everybody, not just director and producer but everybody, including the electrician, and he spent the same time with everybody, and also when he said goodbye he said goodbye to everyone and had a few words with each of us. And we all felt that there was something very special in his eyes. He met every person and there was nothing fake about it: he was completely there, and as truthful as a man can be and as involved with everyone.

WW: It was of course unique, and no film will be similar to this experience. I spent two years on a daily basis with Pope Francis, not in person—in person it was only four days—but I mean in the editing room. I saw him everyday, and listened, and subtitled myself everything he said and all the [video] documents we found, all the appearances all over the world—I knew them all by heart in the end and saw them all hundreds of times. So I felt I was getting very close to knowing him.

And then again this was, as filmmaking goes, not so different, at least in the impulse behind it, from some of my other films, because my documentaries don’t come out of a critical distance. Other filmmakers make films about something they want to expose or something they want to explore, or something that’s wrong with the world. My documentaries are all about things that I love and they show my affection, my desire to share this with as many people as possible, and that was definitely the case with Pope Francis. I loved this man and what he stood for, so anybody who expects a film that’s critical of the church or its policies is looking for the wrong movie. Already when I was a young film critic (I started as a film critic when I was a student and I earned money for my studies by writing criticism about movies) I refused to write about films I didn’t like. I thought it was not worth my time, or anybody’s time. I really only wrote about films I liked. And in a way that continued in my filmmaking career. I can’t even work with actors I don’t like. I don’t know what to do with them. I don’t know how to film them.

MB: What, if anything, surprised you about the pope?

WW: His sense of humor was amazing. And that was a drawback for me because we did all this in Spanish. My Spanish isn’t that bad, and I tried to refresh it, but the painful thing is, if you’re not really perfect at another language, the first thing that you don’t get is humor. You’ll always have that delayed laugh, you know? Somebody says something funny to you, then you stand there and say, “Wait a minute, let me understand that.” So sometimes I had to turn to the guy next to me and say, “Did I get this right?” And then I’d laugh, with a thirty-second delay.