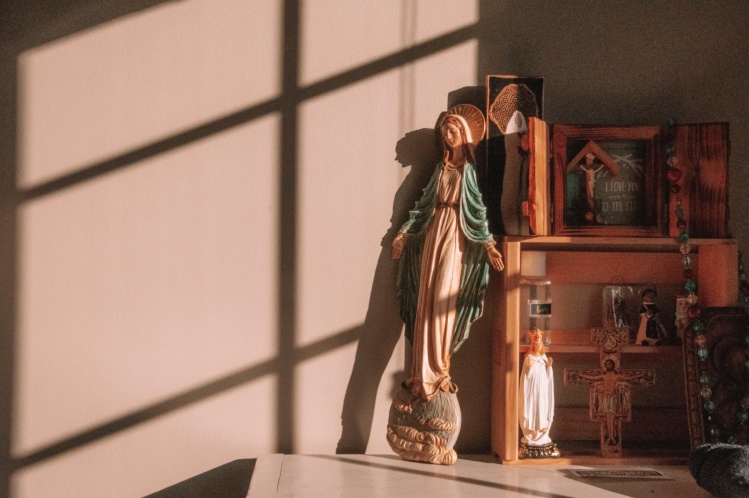 [This article was originally published in the November 5, 1943 issue of Commonweal]

This morning after Communion I thought of writing about Mary, and since the thought came to me at that time, I took it as an order. I always say to the Blessed Mother after Communion—“Here He is in my heart; I believe, help thou mine unbelief; Adore Him, thank Him and love Him for me. He is your Son; His honor is in your hands. Do not let me dishonor Him.”

And since too at that moment came this thought, those glimpses of all she has meant to me—all the little contacts with her that brought me to Him—I felt I must write.

One of the reasons I do not write more is that there is always housework, cleaning, scrubbing, sewing, washing (right now it is cleaning fish), etc., to do. Just as she had to do these things, and probably never neglected them. But then too I can see her sitting seemingly idle beside a well on just such a day as this, just thanking Him, with each happy breath.

Down in New Orleans twenty years ago I was working for the Item, an afternoon paper, and the job was not a very satisfactory one. Women writers, “girl reporters,” had to write feature stuff. I started in writing a column about homely things—the same kind of a column I write now—the Day after Day column, in the Catholic Worker. But they soon gave me assignments, some good, some bad. I had to interview Jack Dempsey, and such like, visiting celebrities. Once I had to cover the political situation and write a series of interviews with the retiring governor and the newly-elected governor of the state. I had to work in a dance hall for a week as a taxi dancer and write a series of articles, in one of which I insulted, so they said, the United States Navy. Representatives from the sailors of a battleship in port at the time came to the newspaper office to rebuke me. It was a change from the work I had been doing in Chicago in the radical movement. But I didn’t like it much.

Across the street from where I lived, I think it was on St. Peter street, there was the side entrance to the Cathedral. Every night I used to go in there for Benediction. Perhaps I was influenced by reading the novels of Huysmans that I had borrowed from Sam Putnam’s library in Chicago. My roommate was Mary Gordon (when I last heard of her, she was working for the League for Spanish Democracy in Chicago, a Communist affiliate), and that Christmas she gave me a rosary. So in this case I was led to the Church through two Communists. I did not know how to say the rosary, but I got a little prayer book at a Catholic book store which I often visited, and I learned how. Once in a while I said it. I remember expressing the desire to talk to a priest—to the girl who ran the book shop—but nothing came of it.

My first statue of the Blessed Mother. Peggy was my roommate in jail in Washington. When we were in the Occaquan workhouse we had ad­joining rooms. In the Washington city jail I had the upper berth on one of the upper tiers, and Peggy had the lower. I read the Bible and she wrote a book of poetry, —“Poems to my Lovers” she called it. I also read letters from the boys I was going with at the time, one of them, my most regular correspondent, a United States sailor. It was during the last war. Some years afterward Peggy gave me a little statue of the Blessed Mother which had been brought from Czechoslovakia. It was made of wax, and very delicate, and there was a golden watchspring-like halo around its head, and golden curly hair and a bright blue robe. How I loved that statue! Down in Staten Island in my little shore cottage I kept it on a shelf by the door with a vigil light burning in front of it.

Peggy also was a member of the Communist party at different times, but being an undisciplined creature and an artist I don’t think she was a paid-up member for long.

One summer right after I became a Catholic I was taking care of a number of little boys from a school “for individual development.” Together with Frea, my next-door neighbor, whose friend it was who ran the school, we took the responsibility for about a dozen boys between eight and twelve. Quite a few of them were children of Communist parents, and several of them have grown up now to be members of the Young Communist League. I used to read them the “Little Flowers of Saint Francis,” which they enjoyed immensely, and they used to command each other “in the name of holy obedience” to perform this or that act of mischief. They also used to ask me to burn candles for them before the little blue statue of the Blessed Mother. Do any of them remember her now?

When my daughter was born almost eighteen years ago, I turned her over to the Blessed Mother. “What kind of a mother am I going to be?” I kept thinking to myself. “What kind of a Catholic home is she going to have, with only me?” And with the Catholic Worker movement starting six years later the home problem was even more acute.

There was a solution of course to such a difficulty. “You,” I told the Blessed Mother, “will have to be her mother. Under the best of circumstances I’m a failure as a homemaker. I’m untidy, inconsistent, undisciplined, temperamental, and I have to pray hard every day for final perseverance.”

It is only these last few years that it has occurred to me why my daughter has never called me “mother.” From the time she first spoke, it was “Dorothy.” I’d think—“of course with no other children around calling me ‘mother’ it is natural for her to call me by my first name.” I’d correct her but it did no good. Later on I’d ask her, “How will anyone know I’m your mother if you do not call me ‘mother?’ They'll think I adopted you. They’ll think I’m your aunt or something.” “I don’t care,” she would say firmly, “I just can’t call you ‘mother.’” And for a child really extremely obedient, it was hard to understand such stubbornness.

Once, in the little post office on Staten Island—she was four then—the postmistress said, “I’d like to hear a child of mine call me by my first name! I’d give it to her!”

When she was in convent school her brief letters began “​Dear Mother,” but it was under compulsion. The Sisters would not let her write unless she so began. But away from school, the letters continue, “Dear Dorothy.”

And then a few years ago, it came like a flash of light, “The Blessed Virgin Mary is Mother of my child. No harm can ever come to her with such a Mother.”

[For more of Dorothy Day’​s writings from Commonweal, see our full collection.]

Tags
From the Archives
Spirituality
Theology
Women in the Church

The Brother and the Rooster