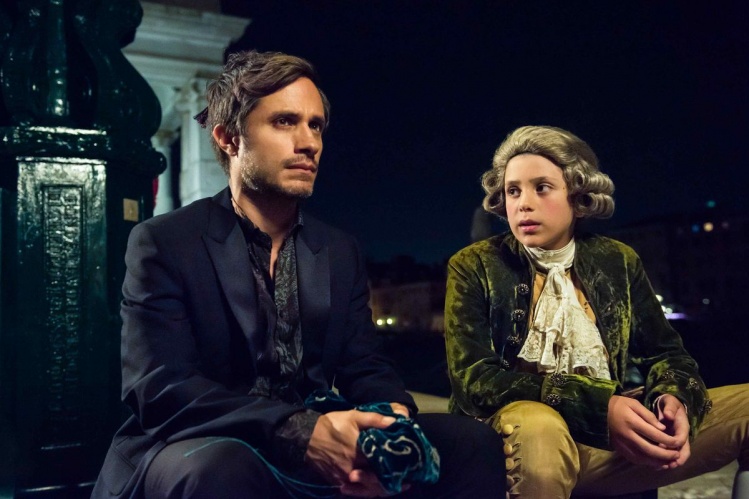 Art and commerce have long been at war, but the battle is rarely fought at a toxic-waste facility with a pair of dueling pistols—as it is in the delightful Amazon series Mozart in the Jungle. In season one, an episode opens with the spectacle of an eco-anarchist violinist performing at a toxic-waste dump, a site she obviously sees as the antithesis of a bourgeois concert hall. With a crazed look in her eye, she grabs two pistols, fires at a music staff printed on a banner, seizes her violin, and plays the bullet holes as if they were notes. “F*** the system!” she shrieks, as a coda to the music.

The scene is a perfect example of how satire blends with sheer whimsy in Mozart in the Jungle, which chronicles the personalities and antics backstage at a (fictional) New York symphony orchestra. Recently renewed for a fourth season, the streamable series shifts through a spectrum of comedy and drama as it follows, among other figures, a young oboist named Hailey (Lola Kirke). The show spoofs the predicament of contemporary arts organizations torn between artistic ideals and financial realities. (A tell-all memoir by oboist Blair Tindall inspired the series.)

A central character is the orchestra’s conductor Rodrigo (Gael García Bernal), the estranged husband of Ana Maria, the eco-anarchist violinist (Nora Arnezeder). A charismatic and supremely impractical genius, Rodrigo chafes at the need to fundraise, an attitude that places him at odds with the orchestra’s anxious head trustee, Gloria (Bernadette Peters). Further complicating the situation is the shadow cast by the orchestra’s conductor emeritus, the crotchety Thomas (Malcolm McDowell), who is trying to reinvent himself as a composer. In one droll scene, Rodrigo, Thomas, and several other music luminaries show up in ridiculous-looking body suits studded with motion-capture sensors to participate in the creation of an orchestral-conductor video game. The game will “open up a whole youth market for us,” a management representative assures Rodrigo, shortly before the session devolves into an inter-maestro fistfight.

If the satire often echoes reality—a strike-related plotline in seasons two and three echoes the labor battles that have recently shaken many American orchestras—Mozart can also be pleasingly unpredictable. You might expect the numerous cameos by real-life classical stars, including Joshua Bell, Emanuel Ax (glimpsed playing a video game in a bar), and Los Angeles Philharmonic music director Gustavo Dudamel. But you might not expect to encounter the dead composers (Mozart, Tchaikovsky, et al.) who materialize—in period attire—for regular chats with Rodrigo. You might be startled when a key plotline involves a curse.

The mercurial personality of Rodrigo (whose celebrity wattage is based on Dudamel’s) helps keep the narrative moving. As channeled by García Bernal, who delivers his lines in persuasively off-the-cuff tones, the maté-quaffing conductor is a disarming dreamer. It seems wholly in character when he invites a drum circle into his Manhattan apartment; or invites the erratic Ana Maria to play Sibelius at an important concert (bad idea!). In season three, Rodrigo shepherds his musicians to the jail complex on Rikers Island, where they perform an all-Messiaen program. In a nice out-of-left-field touch, the episode takes the form of a documentary shot by a nerdy music journalist (Jason Schwartzman), and it comes complete with pretentious camera angles and an arty title (“Not Yet Titled”). Reportedly filmed at the real Rikers, the episode resonates in part because Rodrigo is just the kind of capricious optimist who would want to bring Messiaen to convicts.

With the iconoclastic Rodrigo and the up-and-coming Hailey as principal protagonists, and the disoriented Thomas skulking in the background, Mozart portrays an old order giving way to a new one. It seems apt that the show arrives on Amazon, one of many recently launched streaming services that are remaking the entertainment industry. Like Ana Maria, the new channels can be unpredictable, but they sometimes hit a bullseye.