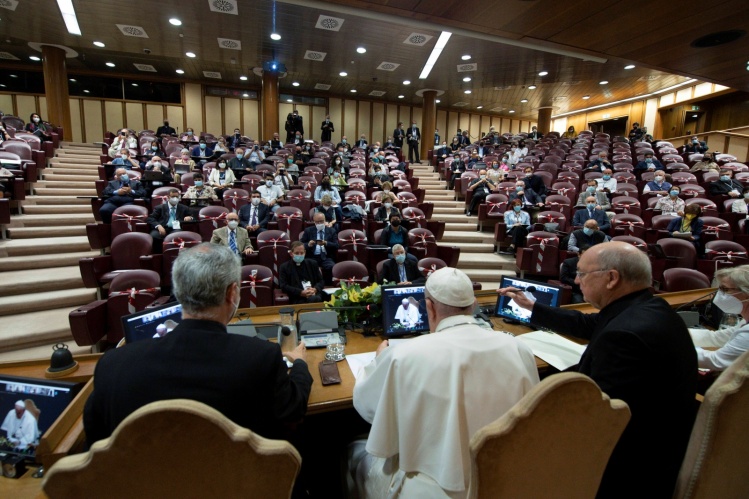 Pope Francis is pictured during a meeting in the Vatican synod hall with members of lay movements, September 16, 2021 (CNS photo/Vatican Media).

“The Church is not a democracy,” hierarchical leaders have long reminded us, but this discouraging refrain has intensified on the eve of the two-year synodal process soon getting underway. The most influential protagonist of any synodal gathering is of course the Holy Spirit, but the most visible is the people—the true “central character” of both this synodal process and the pontificate of Francis. How the people are organized, consulted, and listened to (or allowed to organize themselves) will reveal the ecclesial and institutional understanding of the Church’s members; even if synodality isn’t truly democratic, it has a lot more in common with democracy than with monarchical clericalism.

In the Preparatory Document for the Synodal Process (PD), published by the Bishops’ Synod in Rome on September 7, the term “people” is used twenty-nine times. In the sixty-page long Vademecum for the Synod on Synodality published the same day, the term “people” is used over a hundred times, and half that in the locution “people of God.” The Vademecum presents an understanding of people in the synodal process marked by intentional inclusivity: “Whatever the local circumstances, the Diocesan Contact Person(s) are encouraged to focus on maximum inclusion and participation, reaching out to involve the greatest number of people possible, and especially those on the periphery who are often excluded and forgotten.” This extends even beyond baptized Catholics: “While all the baptized are specifically called to take part in the Synodal Process, no one—no matter their religious affiliation—should be excluded from sharing their perspective and experiences, insofar as they want to help the Church on her synodal journey of seeking what is good and true. This is especially true of those who are most vulnerable or marginalized.” Nevertheless, the participation of the people, baptized or not, takes place within an institutional and liturgical setting. The PD, quoting the 2018 document on synodality of the International Theological Commission, makes that clear: “This is an ecclesial process that can only take place at the heart of a hierarchically structured community.”

So in the context of synodality, we’re basically back to where we started when it comes to the meaning of “people.” The documents of the Bishops’ Synod don’t offer an actual definition. They refer only to Francis’s Evangelii gaudium, which connects the role of the people to their infallibility “in credendo,” and to the constitution of Vatican II, Lumen gentium, where the concept of the Church as “people of God” (chapter two) follows the opening (chapter one) on the Church as a sacrament of salvation. Lumen gentium does not understand “people” in an ethnic, social, or political sense, or as an undifferentiated mass. In Lumen gentium, the Latin for people is “populus,” which is more inclusive than “natio” or “gens” and the Greek “demos” (ethnic). The Greek of the New Testament adopts the distinction between “laos” (people of God), “ethne” (the non-Jews, the nations, the Gentiles), “phylē” (people as a national unity of common descent), and “glossa” (people as a linguistic unity).

The synodal process needs concrete structures of mediation to allow the people to express themselves.
sharetweet

Further, we should keep in mind the difference between the Greek and Roman concepts of people when it comes to thinking about synodality and “democracy.” “Demos” has nothing to do with the Roman concept of “populus,” which is not a defined ethnic entity (all those who lived within the empire were considered citizens, especially after the edict of Caracalla in 212 AD). At the same time, especially in this age of new nationalisms, it is dangerous to derive the concept of Church membership from the one of citizenship. The concept of “people” for the Church is also different from the concept of people in a nation-state. The fact is that “people of God” is a metaphor or an image, without an institutional expression in the Church. But maybe one now needs to be found. The synodal process needs concrete structures of mediation to allow the people to express themselves.

It’s well known that the theology of Vatican II accepted democracy for worldly politics, but for ad intra Church affairs, the ecclesiology only tempered monarchical (papal and episcopal) power with a little bit of collegiality (the bishops together with the pope, but nonetheless under the pope). Synodality, theologically speaking, is much more a post–Vatican II concept. The constitution of the Church, Lumen gentium, talks about the people of God in chapter two, but in the following chapters identifies only two categories of Catholics, clerical and lay (something that also shaped the Code of Canon Law of 1983). So the challenge today is how to shape Church institutions and an ecclesial “style” in a way that is not monarchical, and not just collegial, but in fact synodal: the entire people of God in larger communion with the one human family and creation.

For the development of ecclesiology, Vatican II could count on the rise of a democratic ethos in a way that Catholicism today cannot. The ecclesiology of Vatican II was influenced by ressourcement—going back to sources that preceded the imperial turn of the ecclesiastical order at the beginning of the second millennium. But it was also influenced by the mid-century embrace of authoritarianism and dictatorship by Catholic hierarchies, and the need, two decades removed from World War II, to reckon with that reality. Today we’re seeing something like the reverse of that. The synodal process is also an attempt by the Catholic Church to revive mechanisms of dialogue between the people and the elites during a global crisis of institutions, especially democratic political institutions. Yet this crisis is reflected in the response to that process, notably in the contempt for it sometimes shown by the American Catholic Right.

Still, mere repetition of “the people” is a verbal exercise that will be not enough to move us through the synodal process—which is as spiritual as it is institutional, entailing both spirit and a kind of form. Different forms of representation project different images of “the people.” The way the synodal process unfolds (locally and nationally beginning this year, then in Rome in October 2023) will say a lot about which parts of the Church feel called to participate: which specific actors, organizations and networks, social alliances, classes or class fragments? Even if synodality tackles the problem of clericalism, what kind of laypeople will be represented by the synodal process? Will they differ from country to country? Will they come from among the wealthy, the professional managerial class, the technical-bureaucratic class, the intellectual elites? Will there be a place for young people, the working class, the poor? What about victims and survivors of the sex-abuse scandals?

Synodality is a way to demythologize clerical power through the people, and the challenge is how to do this in a world where power in all its virtual, invisible, and un-nameable forms seems pervasive and absolute. When hierarchical leaders say “the Church is not a democracy,” they’re right, but that sounds like the defensive, reactionary language of old. It is the conditioned reflex typical of the times when the main ecclesiastical concern was the political contrast between the claim of the authority of the Church on the one hand, and the claim of sovereignty of the new constitutional and democratic nation-states on the other. The situation now seems flipped. Today, the problem isn’t an excess of desire among the people to participate; rather, as our sense and value of belonging have evaporated, many who truly care for the Church feel helpless, discouraged, and detached. The Church says it wants “the people” to participate, but absent an inviting and radically inclusive synodal process, it’s hard to imagine them doing so.