The U.S. Sisters & the Holy See

A Culture of Encounter in Action?
By Mollie Wilson O’Reilly
U.S. Catholicism
Pope Francis
Columnists
Women in the Church 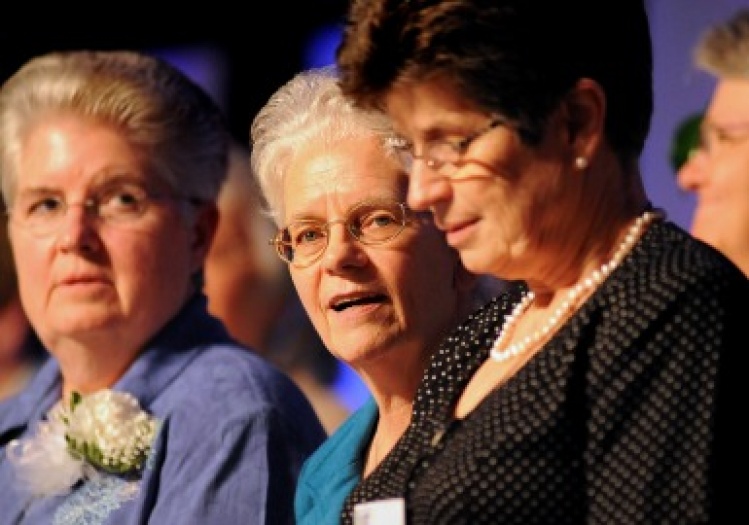 Why hasn’t Pope Francis stepped in to get the Vatican off the nuns’ backs? After all, he has said he wants a more collegial church, in keeping with the vision of the Second Vatican Council. He urges priests and bishops to focus on encounter and outreach. He talks about leadership roles for women.

And yet the Congregation for the Doctrine of the Faith’s 2012 “assessment” of the Leadership Conference of Women Religious stands, and the LCWR—composed of the heads of some 80 percent of U.S. sisters—is still under orders to reform its ways to the satisfaction of the CDF. If Francis really wants a less authoritarian, more mission-focused church, shouldn’t he have called this whole thing off already?

The fact that he hasn’t, and the scolding the LCWR took from CDF head Cardinal Gerhard Müller in April, has led some to grumble that Francis is all talk. But to wish for the pope to cut short a process that began under his predecessor is to wish for him to play the autocrat, albeit on the side of the angels. Out of shrewdness, indifference, or agreement with the nuns’ critics, Francis seems inclined to let the negotiations continue. And the awkward conversation between the LCWR and the CDF may turn out to be just the kind of encounter the church needs.

Laurie Brink, OP, suggested as much in a 2007 address to the LCWR [.pdf], in which she acknowledged the serious divisions between hierarchy and nuns: “Until we as congregations of women religious initiate a process of reconciliation with our ecclesiastical brothers,” she said, “we cannot hope to have much of an impact elsewhere.” Ironically, the CDF cited Brink’s talk as a reason for its crackdown. Still, then-prefect Cardinal William Levada promised the mandated reform would begin with a “personal encounter” between his office and the accused, “in a spirit of mutual respect and collaboration.” The sisters have tried to take him at his word.

The question is whether the parties can have a respectful, collaborative relationship, given that the paternalism that rankles the sisters and their many supporters is, in Rome, the proper order of things. In the view of the CDF, bishops are always presumed to be acting correctly and in good faith, and the sisters are expected to take their cues entirely from them. Women’s religious communities have a more expansive view of their vocations. Moreover, they know bishops do not always act wisely or in good faith. Recall that in 2011, the U.S. bishops’ Committee on Doctrine issued a critique of Elizabeth Johnson’s book Quest for the Living God. The tone was hostile and hyperbolic—Johnson’s work, the bishops claimed, “completely undermines the Gospel and the faith of those who believe in that Gospel”—and the arguments grossly distorted what she had written.

Müller may not know that; he does, however, know that the U.S. bishops criticized Johnson “because of the gravity of the doctrinal errors in [her] writings,” and so he interprets the LCWR’s decision to give her an award at its August assembly as an “open provocation against the Holy See.” He presumes both that the bishops’ critique of Johnson was justified and that the sisters are acting in bad faith in honoring her. In fact, he insists, “there is no other interpretive lens, within and outside the church, through which the decision to confer this honor will be viewed.” It is hard to be hopeful about any exchange that begins with one side declaring that there are no valid perspectives besides its own.

The American sisters’ response to the investigation has been “humble, but not submissive...truthful, but gentle and absolutely fearless,” as Pat Farrell, OSF, put it in her 2012 LCWR address. It could be that the group now wishes to honor Johnson to spite the bishops. But given their deliberate avoidance of open provocation thus far, it seems more likely that their decision to “recognize and thank [her] for modeling extraordinary leadership” is a sincere expression of admiration for the graceful way she has responded to the assault on her good name.

American women religious draw their remarkable strength in part from a half-century’s experience living out the vision of Vatican II in their own communities. “The participative structures and collaborative leadership models we have developed have been empowering, life-giving,” Farrell reminded the LCWR. “These models may very well be the gift we now bring to the church and the world.” I hope so. I do want the CDF to get off the sisters’ backs. But I also want bishops and sisters to be able to work together. Appeals to authority alone won’t get us there. Intentionally or not, Francis is giving us all a chance to find out whether we can work through the messiness that comes with a culture of encounter.

Our Iraq WMDs "eyewitness" made it all up