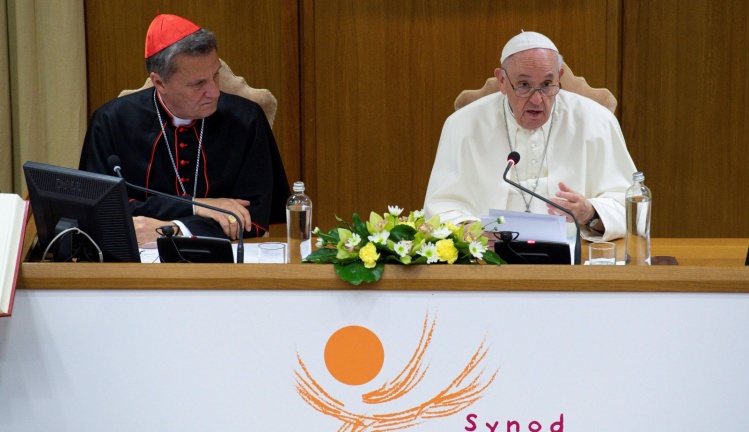 Pope Francis speaks at a meeting with representatives of bishops’ conferences from around the world at the Vatican, October 9, 2021 (CNS photo/Paul Haring).

The “synodal process” in advance of the Synod on Synodality of October 2023 is officially underway, or should be underway, in all local churches. But if you spend any time on the campus of a Catholic college or university—as a student, teacher, member of the staff, parent, or simply because your house or parish is near one of those campuses—you’d never think that the Church is in the midst of the biggest ecclesial event since the Second Vatican Council, one that’s supposed to involve the entire people of God. There just seems to be a feeling of indifference about the whole thing.

This stands somewhat in contrast to the engagement of Catholic institutions of higher education with Vatican II. In 1959 and ’60, in preparation for the council, theological faculties were invited to submit their proposals for the formation of the conciliar agenda. In the United States, these included the Catholic University of America, St. Mary of the Lake in Chicago, and St. Mary in Baltimore. True, the participation of the majority of people in university communities was limited to following the proceedings via mass media, though some of the most influential theological advisors at Vatican II had chairs in Catholic and pontifical universities. And among the final messages delivered on the last day of Vatican II, there was one for youth in general but not specifically for students. Yet college and university engagement with the council picked up in the immediate post-conciliar period, with students and faculty alike becoming actively involved in the celebration and reception of Vatican II. Outside the United States, the impulses of Vatican II for theological and ecclesial reform were part of a more general movement of reform—not just ecclesial but also social and political. The tumultuous post–Vatican II period in theological faculties in Germany famously shocked Joseph Ratzinger (the future Benedict XVI) and convinced him to move from the University of Tuebingen to the more tranquil University of Regensburg in his native Bavaria.

There just isn’t the same kind of interaction or energy today, at least in the United States. In the preparation for the synodal process launched by Pope Francis in October 2021, there was no special attention to, or guidance set out for, students and universities. The synodal-process program released in April 2021 included guidelines for submitting contributions before April 2022, but they were not very clear: “The Dicasteries of the Roman Curia, the University - Faculties of Theology, the Union of Superiors General - International Union Superiors General (USG – UISG) and other Unions and Federations of Consecrated life, and international lay movements, shall also provide their own contributions to the General Secretariat of the Synod of Bishops.” Consequently, it’s not very clear what’s happening at Catholic universities in the United States. As for the Vademecum published by the Bishops’ Synod in September 2021, it vaguely mentions the role of schools and universities in the listening phase at the diocesan level (par. 3.1) and concerning the role of the bishop (par. 4.1). Even though the Bishops’ Synod has appointed eminent theologians (women and men, lay and clergy) as experts, it seems to have given little attention to the importance of contributions from the global Catholic theological and academic community. And while Pope Francis often encourages young people to be active in the Church, to shake things up and “make a mess,” the synodal process doesn’t seem to offer college students—or the university community at large—much opportunity to get involved.

Francis’s encouragement of social and ecclesial movements has always been clear, but he has generally kept the academic world at arm’s length.
sharetweet

What should we make of this? Francis’s encouragement of social and ecclesial movements has always been clear, but he has generally kept the academic world at arm’s length. It’s not anti-intellectualism, but rather a general distrust of elites. The university is seen as a locus of power and expertise. The synodal process, on the other hand, proposes a rebalancing of power, not only between lay and clergy but also between elites and the people. But the distance between Catholic universities and the synodal process is a bad sign. Universities are still an important place for the church to do its thinking, and the synodal process seems barely to take them into account. And vice versa: the Catholic theology academy generally isn’t interested in offering courses in ecclesiology with attention to the institutional dimension of the Church, though there have been some efforts; see, for example, this webinar from the Boston College School of Theology and Ministry Continuing Education. (A very different example is the course on synodality offered by the Jesuit-run Pontifical Gregorian University in Rome.) And in an environment where many militant bishops show little or no interest in synodality, there has been a very weak institutional response from the organizations of Catholic theologians on this front (mea culpa)—at least so far. American Catholic theologians have provided and are providing important contributions on the theology of synodality, but there has been little organized institutional effort to claim a place at the table, perhaps because there’s been no official invitation from the USCCB or the Bishops’ Synod. Yes, in February, Pope Francis will meet virtually with Catholic university students throughout the Western Hemisphere in a dialogue hosted by Loyola University Chicago. This could jumpstart things, but at this stage of the process there should be synodal events on campus, with the participation of college communities and in coordination with gatherings at local churches.

This also raises questions, then, about the role of Catholic universities in the ongoing ecclesial conversation, especially in the U.S. Church. What kind of ideas can come from institutions where the power of administrators (almost a kind of clericalism itself) and the technocratic mentality threaten the old institutional model of shared governance? Maybe if the presidents of Catholic colleges and universities were all still members of the clergy, then there’d be more interest in synodality. The corporatization of higher education is one area in which the post–Vatican II transition from clerical to lay leadership has been a mixed blessing. (We may also need to consider that, as in other professions, higher education is feeling the effects of the pandemic’s “great resignation” or suffering a general disengagement from the ecclesial community in the wake of Covid; the call to “walk together” in synodality may be coming at a bad time.)

There’s something else to think about: if synodality can’t get young people interested in the Church, then what can? Students were once the engine of social change, but now they seem to be laser-focused on their studies and myriad extra-curricular activities (clubs and teams, attending sports events). As higher education has become a corporatized system for churning out high-earning “professionals,” less has been done to cultivate or encourage a sense of philosophical, political, and spiritual exploration. Students do not have the time for shaking things up in society, much less the Church. Universities around the world were breeding grounds for late-1960s and early ’70s social and ecclesial movements. Some Catholics may not be nostalgic for those turbulent days, but the current environment is far different from Vatican II and the early post–Vatican II period. There is a tension between the technocratic focus on leadership and pragmatism, and the ethos at the basis of synodality. Despite worries over “woke” Catholicism and the “campus left,” the separation of university and Church, and of Church and social movements, suggests­ a larger, more worrying separation of the Catholic university from the world outside.

“Catholic schools remain essential places for the evangelization of the young,” Pope Francis said in Christus Vivit, the apostolic exhortation following the Synod on the Youth of 2018. But this is not reflected in the current synodal process, which seems intent on not including universities— at least right now. But there is not much time left. Continuing this way would be a serious mistake, one that won’t be corrected by local bishops, given the complicated or poor relationships many of them have with the Catholic colleges and universities in their diocesan territory. But nor should it be left to heroic, individual faculty members or campus ministers to try to build something the bishops themselves seem to have no interest in. Universities must be involved in the synodal process, not just for the sake of the synodal process but also for the mission of Catholic higher education—and the future of the Church itself. Indifference is not an option. 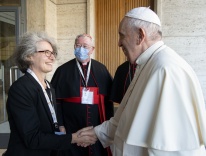