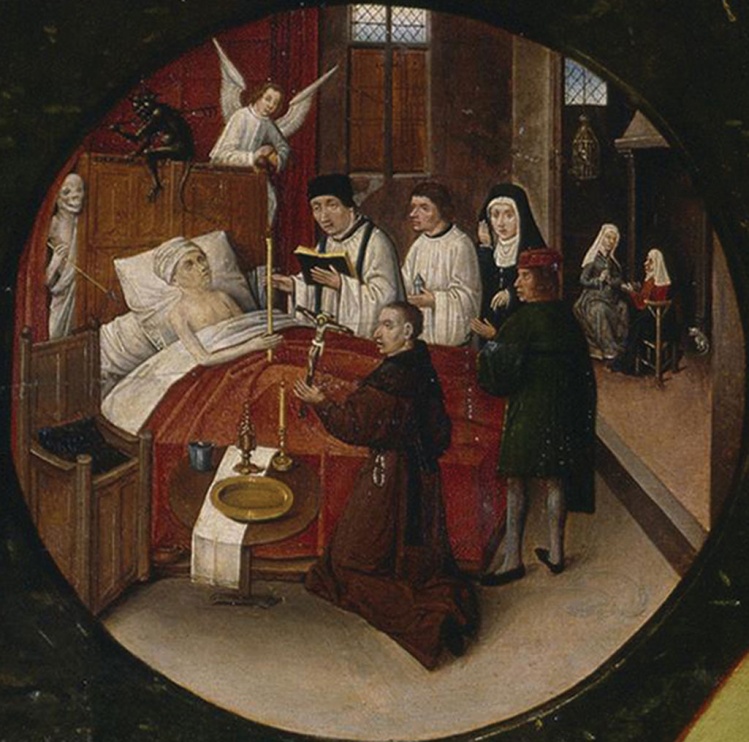 When we look into the eyes of someone sick and suffering, it tests our Christianity. It tests what we’re made of, because it’s hard not to look away. The gaze of compassion, “suffering with” another, does not come easily to most of us. Yet that is precisely what followers of Jesus, the Man of Sorrows, are called to do. It is what “communion” requires—not looking away.

So what does it say when we look into those pain-filled eyes, and are unable to provide that person with something that will help? Catholics have a gift of immense spiritual value to offer those weighed down by illness: the Sacrament of Anointing the Sick. Yet according to Catholic discipline only one kind of person can offer that: a priest. And there aren’t enough priests to go around.

Let me be clear: I’m all for priests performing their priestly role with respect to the Sacrament of the Sick. But the church is suffering from a priest shortage, and it’s getting worse. Increasingly, caregivers, chaplains, lay ministers, and others have become the face of compassion for the sick—the face of Jesus—but they cannot offer the sacrament, which the church so beautifully calls a “sacrament of healing.” Paradoxically, reserving this sacrament to priests and bishops does not make it more cherished but less so, as people learn to live without it.

It’s not as though the sacrament is altogether missing. Healing services are held in some parishes. Anointing of the Sick may take place at Sunday Mass. Parish priests do visit the sick. Hospitals usually have a priest on call for an emergency. But what happens in rural areas, where priests typically serve two, three, or even four parishes? How many sick calls can a parish priest make in today’s mega-parishes whose flocks now number in the thousands? Something has to give.

The most obvious source of additional help would be deacons. The obstacle, however, is that the Council of Trent (based on James 5:15) said the sacrament of the sick forgives sins—and of course we can’t have deacons doing that! But how many of the sick are even aware that this sacrament is a twofer? The idea made sense when anointing was called “extreme unction” and only administered at the point of death. It makes little sense today. The Second Vatican Council rightly restored anointing of the sick to the status of a repeatable sacrament for those who are seriously ill, impaired by old age or chronic illness, or facing surgery. For those at the point of death, the path is clear: they are anointed, their sins are forgiven, and they receive Communion (viaticum)—a trio the Catechism likens to the three sacraments of initiation. It is their preparation for “passing over” from this life to the next, just as initiation is a “passing over” to new life in Christ. But for others who are sick—and this constitutes the majority—a different approach makes better sense. Oil for healing. Laying on of hands. Prayer, faith-filled encouragement, compassion.

Sacraments are means of Christ’s presence, a sanctifying presence that brings into the light the struggles of life, and showers on us the grace God freely gives. Sacraments strengthen us to bear the crosses we have been given. We already allow deacons and lay ministers to bring Communion to the sick, and the Eucharist is the premier sacrament, to which all other sacraments are ordered. Why be so stingy with oil for the sick?

Permanent deacons, hospital chaplains, and lay ministers to the sick and homebound could all be properly trained and deputed by the bishop to anoint the sick where there is need. Yes, it would be a change in discipline. But the care of souls demands that extraordinary times be met with boldness for the sake of the Gospel. The priest shortage is one of those times. It is not beyond our ingenuity to propose an adapted order of service for anointing the sick for use by deacons and the non-ordained, much as there have been services produced for Sunday celebrations in the absence of a priest. I’d rather see more priests ordained. But there’s a lock on that door. And until it opens, the spiritual needs of the sick are crying out to be met. Pope Francis has proclaimed a “year of mercy” that will begin in December. It should cause us to think again about the sacrament of the sick—and how we can offer it more generously.