How I Got Started in Journalism
By William Pfaff
U.S. Catholicism 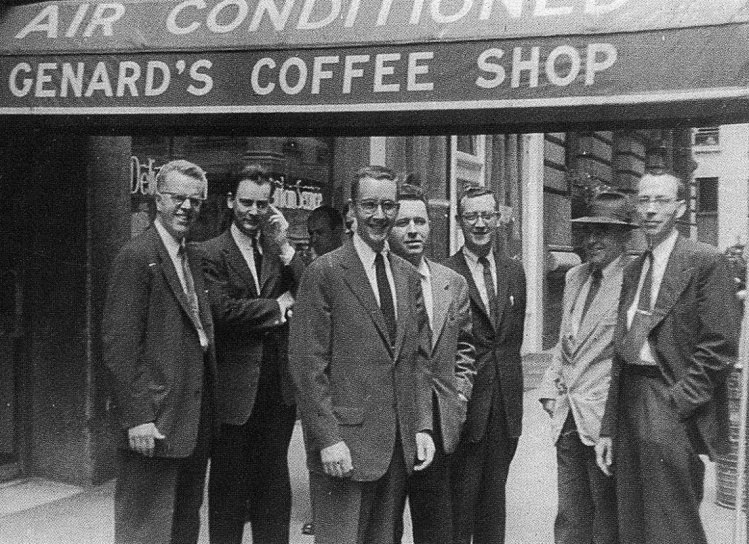 After I graduated from Notre Dame in 1949, I faced the problem of what to do to make a living. All my college friends seemed headed for graduate school, but I felt that I had spent quite enough time in a classroom and should find a real life.

I had majored in English and minored in politics and philosophy. (Political science, blessedly, had not yet been invented.) My teachers included Waldemar Gurian, a Jewish-Catholic exile from Nazi Germany (see his friend Hannah Arendt’s Men in Dark Times, in which he figures), and Yves Simon, a lifelong friend and collaborator of Jacques Maritain. That pair, combined with Frank O’Malley’s two-year daily course in European literature and the modern Catholic intellectual renaissance in Europe, had given me and other privileged students a formation probably unique in the United States at the time. But it was hardly one that appealed to employers—in any case, employers of what?

I was interested in history and international politics, and, having no better ideas, put my name in for the State Department Foreign Service examination. Just before receiving a summons to Atlanta for the test (I lived in Georgia at the time), a letter came from what then was called The Commonweal (the definite article disappeared well after my time). It was from Edward Skillin, the editor, publisher, and one of the owners of the magazine—one of the nicest men who ever lived. “Professor O’Malley has suggested your name in connection with a vacancy we have for an assistant editor,” he wrote. “The salary is $75 a month [if my memory serves]. Would you like to come to New York and try your hand?”

My father, a businessman, exploded. “Try your hand! What is that supposed to mean? What is this magazine? I’ve never heard of it. You would rather ‘try your hand’ with it than have a civil-service job in the State Department with a pension?” Today, sixty-five years later, I appreciate the force of his concern. But I took the train to New York, got a room at the Sloane House YMCA hostel, and presented myself the following day to Edward, Philip Burnham, who had just returned from wartime service, and the brilliant but brooding Edward Meagher, whom I would come greatly to admire—another ND man recommended by Frank O’Malley.

The vacancy I was to fill was created by the departure of C. G. Paulding, a marvelous writer, who subsequently became an editor of Max Ascoli’s new Reporter magazine (Ascoli had been an early exile from Italian fascism). Paulding had been responsible for Commonweal’s comment on the Hiroshima atomic attack: Why didn’t they drop it in a desert someplace, and tell the Japanese to go and look at the hole?

The magazine was located at Fourth Avenue and 32nd Street (upper Fourth Avenue became lower Park Avenue some years later). Edward Skillin had his own office, and the rest of us shared a large editorial room. A second private office was used by John Brubaker, the beleaguered advertising manager, striving to keep the enterprise afloat, and a third private office was sublet to the president of the Catholic Poetry Society, whose name I do not recall, as he was infrequently there, and whose publication I thought it prudent not to read. His greatest interest, other than Catholic poetry, seemed to be the Lotus Club on Gramercy Park, an establishment of theatrical origins, of which he was an officer. Our entourage was completed, as was usual in those distant days, with a delightful and efficient Irish secretary of uncertain age, named Molly.

My duties were to prepare copy, read proofs, and go downtown to the printer on Thursday evenings to “read the stone”—that is, to read the magazine for errors after the type had been set, locked into forms, and proofs drawn by the forms’ being placed face down on a dampened table-sized sheet of thick paper. The printers were friendly but condescending, and always in a hurry. I think they gave us a discount.

To my surprise and delight, soon I was given some book reviews and editorials to write (thus did I become a pundit). From the start, it was first names for all, and we usually lunched together. Edward was often delayed by a few impoverished men who hung around waiting for him outside the building. They consulted Edward, who listened patiently and usually slipped them some cash. I cannot say enough in praise of this gentle, saintly man, who, with his wife, Jane, would later adopt two Vietnam War orphans to add to their own children.

We were sometimes joined by our movie critic, Phil Hartung (who also reviewed for a major women’s magazine). Our theater critic, Kappo Phelan, never came to the office. I liked her writing very much and was intrigued by the infant name, but as she was a childhood friend of Edward’s and I was not quite twenty-one at the time, it seemed a little pointless to try to meet her. I would soon be taking out to the movies a nice Irish girl, a former novice nun, who had jumped over the convent wall to work as a waitress at Schrafft’s. We were not a have-a-drink-after-work crowd because I was one of just two Manhattan residents on the staff. I had to learn my drinking (mostly) on my own.

The editorial group soon changed. Phil retired. John Cogley arrived with his wife Teddy and children, fresh from taking an advanced degree in theology at Fribourg in Switzerland. He and Jim O’Gara, who was to join the staff while I was away during the Korean War, had founded the Chicago Catholic Worker House (but both dissented from Dorothy Day’s pacifism). Jim came not long after I returned. He bought a modest GI-loan house in Levittown on Long Island and, next to Edward, was to become the mainstay of the magazine for the next few decades. He would be my son’s godfather, long after I had left the magazine.

Bill Clancy came from an academic background, and was destined for the priesthood (with the Oratorians). He filled the slot I temporarily vacated for the army.

John Cogley became the most noted American Catholic journalist of the period, recruited to the New York Times and then the Ford Foundation–endowed Fund for the Republic, but to the consternation of all (he wrote a good book to explain it), he became an Episcopal priest after Vatican II.

The Commonweal was founded in 1924 as a review of the arts and current affairs, under the auspices of well-to-do Catholics, meant as a demonstration that an American Catholic educated class existed. The Franco uprising in Spain in 1936 was the great Catholic political cause of the 1930s. It provoked a crisis among the magazine’s staff. Michael Williams, its founding editor, supported Franco. But the junior editors, Edward Skillin and Philip Burnham, took a neutral position on the war. They emerged in control of the magazine.

The Catholic hierarchy and Catholic publications the world over, however, threw their support behind General Franco. That placed Commonweal in a delicate position with respect to the American hierarchy and Rome. There were semi-official efforts to disavow the magazine as not really Catholic. Even lay people, after all, were expected to think what they were told to think, and the new Commonweal editors were not falling in line. In the end, the magazine’s editorial position on Spain cost it a good many subscribers but solidified its position and reputation.

I never learned exactly what happened in 1936, but I believe that both Edward, a Williams College graduate, and Philip, who had been schooled privately and at Princeton, came from at least moderate wealth, and I know that in my time there were wealthy benefactors called on from time to time to sustain the magazine, destined by its nature to chronic (if not holy) poverty.

In the 1950s, another crisis occurred when the magazine, one of the most articulate of the limited number of Catholic critics of the Communist-hunting Sen. Joseph McCarthy, was invited before the Senate Permanent Subcommittee for Investigations. On a few occasions, McCarthy had suggested that Commonweal was a pro-Communist or otherwise subversive publication. That claim was skillfully rebutted by John Cogley in his testimony. John would much later advise John F. Kennedy in preparation for his crucial speech to Southern Baptist leaders, many of them convinced that Kennedy’s election would, spiritually at least, put the pope in the White House.

To indicate how distant those days now are, I will add one more personal note on the summer of 1950. I was at a party one Saturday night, mainly for my roommate’s friends from the National Federation of Catholic College Students (in which he, a wartime army officer, had been active at Notre Dame). The visitors were leading a Holy Year student trip to Rome. I said to the person in charge that I greatly envied them sailing for Europe in a few days. “Come along,” she said. “One of our staff has dropped out and you can take his slot.”

On Monday I eagerly shared this with Edward and begged for enough time off to accept. He naturally agreed. My heartfelt argument was, “I may never again have a chance to see Europe!” After Rome and Paris, the army called, with which I traversed the Pacific, returning afterward to Commonweal for three more years. By 1955, I felt it was time to leave the happiest job I ever have had, to see still more of the world in Africa and the Middle East. In 1961, with a grant following my first book, I was in Southeast Asia and again the Middle East. I was much interested by Indochina, and came home convinced that it was an absolutely disastrous idea to enlarge the U.S. intervention, which was then in its infancy.

I began contributing a foreign-affairs column to Commonweal, expressing that (and similar) views with regularity and extreme vigor until 1971, when I began two decades of writing political “Reflections” for William Shawn’s New Yorker, while continuing the occasional piece for Commonweal that happily has kept my name on the magazine’s masthead to the present day.