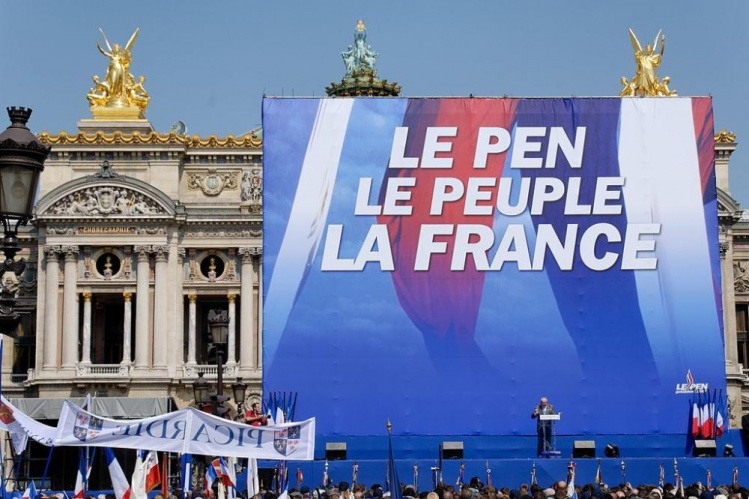 The current transatlantic view of Europe is one of continental political decline, elegant at best but ominous at worst. Much of the European Union seems threatened by hostile if marginal (or not always so marginal) nationalist parties, above all in two leading nations, France and Britain. These parties attract great attention because of their dramatic character but are hard to take too seriously, given the weight and continuity of the party systems in nearly all of Western Europe.

Most dramatic, because of its disturbing re-enactment of Shakespeare's "Lear," is the National Front in France. In the past two weeks this drama has played out in the family of the party's founder, Jean-Marie Le Pen, with principal roles assumed by the old patriarch, his eldest daughter, Marine, and his granddaughter Marion Maréchal-Le Pen.

Marine is now running for the presidency of France, as her father has done five times. Yet, as she struggles to update the party's image, she finds herself cast in the role of faithless daughter, betrayer of her father. Meanwhile, the twenty-two-year old Marion, parliamentary deputy for Provence, Alps, and Cote d'Azur, is the good daughter Cordelia, who would have saved the aged king.

Jean-Marie Le Pen founded the National Front in 1972, appealing to veterans of the post-Algeria military uprising against President Charles de Gaulle, old supporters of the collaborationist Petain regime, young neo-Nazis, and other elements in the nationalist and religious right. His appeal was anti-Semitic, anti-immigrant, and anti-Gaullist, and he was opposed to the supranational body that would become the European Union.

He ran for president of France five times, but reached the run-off final round only once, in 2002, when complacent Socialist voters failed to turn out for the first round. Everyone came out to vote in the second round, and Le Pen was overwhelmingly defeated, as he was in all the other presidential races he entered.

Marine was the daughter with political ambition, and in 2011 she became president of the party, her father the "president of honor" but with his own ideas about where power would remain. Marine believed that in a time of a disgruntled national electorate she could remake the party and succeed in winning the national office that eluded her father.

To do that she resolved -- and announced -- that she intended to "de-diabolize" the party, making clear that the day was past when the National Front would defend her father's propositions that the wartime extermination camps were a "detail" of history, that the Nazi occupation of France was "not particularly inhumane," and that Marshal Petain was a hero and General de Gaulle a traitor to France.

In the regional and local elections following 2011, the Front steadily progressed until reaching the point where it led the governing Socialist Party, while still lagging behind the combined conservative parties that had governed before 2008. It clearly had become a party the others had to reckon with, but its future remained in doubt, as the polls showed.

Two weeks ago Jean-Marie burst his bounds and gave an interview in which he reiterated all his outrageous beliefs. He told the British press that Marine was a "petite bourgeoise" (a little middle-class girl) trying to win the favor of France's establishment. He said she lacked credibility and culture, "the political and human density" to assume the presidency.

She replied that she had made the Front "a party of government," while her father was committing political suicide, determined to destroy the party he had created. She threatened to have her father expelled from the party. At that point Marion, the granddaughter, intervened, and silence has fallen. Jean-Marie dropped his plan to run this year for the parliamentary constituency Marion holds.

Britain, meanwhile, has its own sensational right-wing party in the form of the United Kingdom Independence Party, led by Nigel Farage. Even more than the French National Front, it is a party based on a single issue: UK withdrawal from the European Union. It has disproportionately dominated press coverage of the campaigns for the general election that will take place in May, as the best it can hope for in a new government is to be a junior partner, and even that is unlikely.

UKIP is a reactionary force whose strength lies in condemning and attacking the major historical parties of the nation on the ills of continued membership in the European Union, with its open borders and immigration mobility.

It makes the unconvincing argument that British departure from the European Union could open the way for the country to recover (in alliance with the United States?) some part of the great international prestige it possessed before the Second World War. Just after the war, the British Empire actually was at the peak of its territorial extent, extending unbroken from Egypt to Burma, but its power was inexorably draining away to its American successor. The territory itself was to be steadily ceded until the British withdrew from "East of Suez." Britain has returned only as an auxiliary to American adventures.

Whether that will remain its role may be decided by the May election results. Europe, all of it, still has an open future.