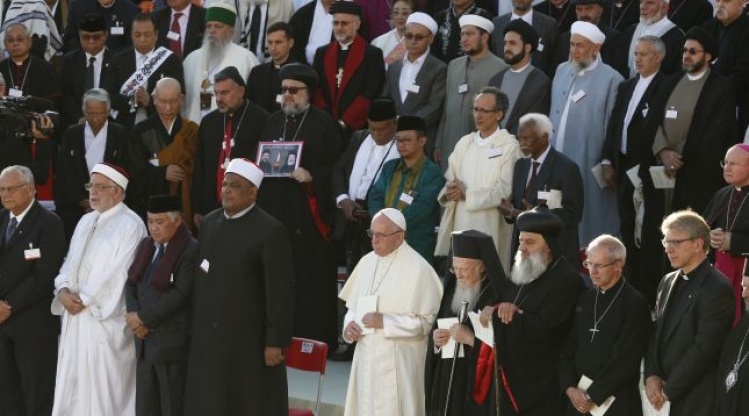 On September 20, Pope Francis hosted twelve refugees from Syria, Eritrea, Mali, and Nigeria for lunch in Assisi. Many of his guests were children. They offered him their drawings; he presented them with toys. Over bowls of apples and bottles of juice, Francis heard stories of treacherous boat journeys and the difficulties of resettlement in Italy.

That same day, in New York, President Obama hosted a leaders’ summit at the United Nations. The topic: how to help the 65.3 million people around the world displaced by violence, poverty, and climate change. A UN meeting the previous day had produced target commitments for housing and education, along with an agreement among thirty nations to provide an additional $4.5 billion in humanitarian aid. Neither initiative is binding; both have delayed timelines.

While diplomats and politicians negotiated, two men spoke more in the spirit of Francis. Faisal Bin Muaammar, a former cultural representative in Saudi Arabia, and Metropolitan Emmanuel, an Orthodox exarch in France who represents his church to the EU and the Vatican, were at the UN to advocate for interfaith dialogue—in their eyes, an underutilized strategy for potentially addressing the migrant crisis. Bin Muaammar and the Metropolitan help lead the King Abdullah bin Abdulaziz International Center for Interreligious and Intercultural Dialogue (KAICIID), a global interfaith group that provides grassroots instruction in formal dialogue practices. Since 2011, KAICIID has collaborated with communities in the Central African Republic and Nigeria, writing curriculum and teaching local religious leaders to lead discussions between farmers and herders, Christians and Muslims—across ethnic groups, age brackets, and genders.

KAICIID prides itself on being both interreligious and intergovernmental; it is overseen by Austrian, Spanish, and Saudi officials as well as by representatives of major world religions (the Holy See is the group’s Founding Observer.) Bin Muaammar and the Metropolitan embody this mission: politics and faith working together. From different perspectives, they made the case that faith communities should be recognized as tools for peace, especially given tenets that call for welcoming the needy. The Metropolitan cited the “care for the other” ethos that courses through sacred books: love your neighbor, “open your houses.” He remarked on the motif of the holy stranger, protected by Zeus in Greek myth, pregnant with Christ in the New Testament. Bin Muaammar called religion the “soul of relief, empathy, and charity.”

But awakening empathy even in the most pious communities isn’t easy. The Metropolitan admitted that with terrorism scares and a displaced population “proportionately not easy to manage,” xenophobic responses are “only human.” Bin Muaammar said the success of the New York Declaration would hinge not on who people are intrinsically, but on who they are “raised up to be.” Such an upbringing happens via faith. “Religious leaders…have access to the people. They are trusted and respected,” Bin Muaammar said. Priests, rabbis, and imams can muster resources and sway reluctant minds.

KAICIID believes its dialogue-centric approach could help foster acceptance within and among religious communities in Europe and elsewhere, encouraging them to become sources of aid for refugees. Their proposals currently focus on how Christian and Jewish communities can welcome Muslims, but they can also be applied generally. Grassroots groups in churches, synagogues, and schools would train locals and newcomers how to connect respectfully, according to Bin Muaammar, who also mentioned cultural assimilation and language courses, some specifically designed for women. These tactics “cross psychological barriers” in a way mere policy briefs cannot.

That said, KAICIID understands the skepticism among some UN delegates. Money, tents, and food can be quantified; “overcoming stereotypes” and “promoting mutual respect” cannot.

What’s more, religiously motivated violence is what displaced so many people in the first place. What good is more talk of faith? KAICIID grapples with this reality by distinguishing itself from it, calling terrorist activity a “misuse of religion.” “Terrorists deny God, they deny humility,” Bin Muaammar said. The Metropolitan added that “[t]hose who are terrorists have nothing to do with religion.” Both men insisted that the violent can’t possibly know God.

But by even citing the “misuse of religion,” Bin Muaammar and the Metropolitan demonstrate how tricky interfaith work can be. They must practice acceptance while denouncing villains. They must write implicit definitions for goodness across religions, cultures, and landscapes. They must refrain from proselytizing, yet motivate out of their personal convictions.

Still, KAICIID insists that religious dialogue will make political commitments stick. The Metropolitan described a church meeting in Paris after the November 2015 bombings that left one hundred and thirty people dead. “Some said, ‘It’s better not to have service on Sunday—we don’t know who will come in,’” he said. But his church swung its doors wide, forgoing security concerns. More than three hundred people filled the pews to hear a homily of hospitality and forgiveness; after church, they became “multipliers of that message:”

After his September lunch with the children, Pope Francis met with Muslim, Jewish, Anglican, and Syriac Orthodox religious leaders. The world must “go beyond the divisions of religion,” he said then, issuing a message identical to KAICIID’s. Collaboration between the Vatican and the interfaith group continues; two weeks ago, in a KAICIID-organized conference, more than forty leaders from eight religions met with Pope Francis in Rome for an interreligious symposium on mercy.

A recent UN study on Nigerian refugees, co-sponsored by KAICIID, might offer a glimpse of what’s possible. The study included interviews from former Boko Haram fighters now in detainment camps, 38 percent of whom said they have a high level of trust in religious leaders to act in their best interests. Most of these respondents also reported being recruited into Boko Haram not by leaders in mosques and madrasas, but by friends and family; they had limited knowledge of the Quran when they joined the terrorist organization, and only in time did they realize that Boko Haram was misrepresenting Islamic teachings. KAICIID Director General Fahad Abualnasr concluded that religious leaders should use their capital to “inoculate local communities against radicalization” by correcting misuses of faith. Perhaps KAICIID’s dialogue model could be doubly vital—not only in encouraging the acceptance of refugees, but also in preventing the conflicts that make them.