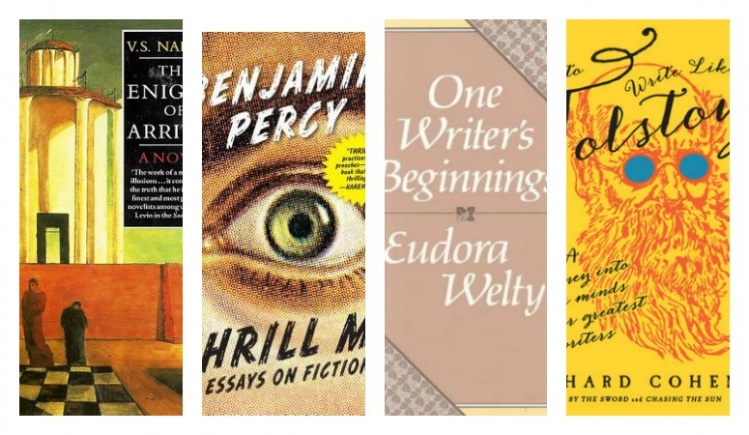 Twentieth-century American journalist and screenwriter Gene Fowler left us this memorably unsettling line about writing: “It’s easy: stare at a blank sheet of paper until drops of blood form on your forehead.” His facetious nod to the purgatorial aspect of the endeavor hasn’t warned anyone away. Today there are nearly four hundred MFA programs in fiction and creative writing in the United States, up from sixty-four in 1994. Online journals and literary sites proliferate. Throw in countless workshops and annual events like November’s National Novel Writing Month, and either a lot of blood is being shed or maybe Fowler was just poorly suited to the challenge.

Then there are the books about writing. You might think that Aristotle or Virgil, or Sterne or Pope, or Virginia Woolf or E. M. Foster, or Henry James or Flannery O’Connor had offered sufficient advice on how to write. But this year brought another reliable crop of meditations and how-tos, and if I haven’t taken the completist approach to reading them, it’s because my shelves already groan under the weight of guides from John Gardner and others; anthologies like Writers Dreaming: 26 Writers Talk About Their Dreams and the Creative Process; the collected Paris Review interviews; and too many more to mention. But always curious, I checked out a pair of this year’s releases, and I also serendipitously discovered two beguiling works dating a few decades back. Herewith a small sample of philosophies and sensibilities, even if no simple answers to the big question of just why we write at all.

Among 2016’s new titles was Richard Cohen’s How to Write Like Tolstoy (Random House, $28, 323 pp.). Cohen, a veteran editor and publisher, structures the book as a survey, and starting with his tongue-in-cheek title contends that writing is learned best from its most revered practitioners. Things unfold with the comfortable familiarity of an undergraduate world-lit course; chapters on opening lines and character dutifully give way to chapters on dialogue and point of view, amply illustrated with passages and observations from Sophocles and Shakespeare, Proust and Flaubert, Spark and Stein. Cohen’s tour through centuries of literature inspires awe even if at times it overwhelms; so many ready citations can make for simultaneously diffuse and dense reading. A notable exception is a fascinating chapter on plagiarism, in which Cohen traces the word from its Latin origins (“kidnapping,” or literally, “going out with a net”) up to its modern usage. He presents anecdotes from throughout the ages, including a case that hits humorously close to home, and ends by allowing that all writers must ask themselves if, in the words of Graham Greene, they have the “‘ice chip in the heart’ that allows them to plagiarize the lives of friends.” There will be blood.

Which happens to be a chapter heading in Thrill Me: Essays on Fiction (Graywolf Press, 160 pp., $16) by novelist and comic-book writer Benjamin Percy. His goal is twofold: to show writers of genre fiction how to draw from literary greats to create work that rises above the putative constraints of the form; and to show writers of literary fiction how some scares, suspense, and gore could turn that epiphanic wisp of prose into a visceral story. The takeaway: “literary genre fiction” is not an oxymoron, but the happy result of energetic cross-pollination. Percy, a craft-obsessive who can clearly write, makes deft connections from revered forebears like Chekhov and Dostoevsky to celebrated contemporary authors like Cormac McCarthy, Karen Russell, Lydia Davis, and George Saunders—mustering well-chosen excerpts to show just how and what the latter have learned from the former. And he draws effortlessly from film (Hitchcock, Battleship Potemkin, Jaws), television (The Sopranos, Game of Thrones), and music (Johnny Cash, Jimi Hendrix) to advance convincing, even thrilling, claims about structure, voice, and style. Percy’s expansive tastes serve his generous aims well.

Just what were the aims of V. S. Naipaul when he sat down to write The Enigma of Arrival (Vintage, $15, 354 pp.)? It’s been something of a puzzle since the book’s publication nearly thirty years ago. This long, memoir-like novel is broken into five chapters of deep rumination and minutely observed detail. It’s set nominally in the countryside of England but mainly in the narrator’s psyche. In a middle chapter titled “The Journey,” he addresses the difficulty of becoming a writer. It’s not the craft or the ambition or even the talent, he suggests, looking back on his youthful attempts. Rather, it’s the hard-won ability to synthesize, to incorporate “the worlds and cultures that had made me.” Many years pass before that synthesis comes, and when it does, he describes the moment as “an illumination.” Yet what should seem liberating is not. Naipaul notes ruefully that his early way of writing—“the separation of one world from another”—was actually easier, that achieving the long-awaited moment of synthesis “tired me.” This beautifully crafted chapter by itself may disabuse readers of whatever romantic notions they harbor about the writing life.

In coming to Eudora Welty’s One Writer’s Beginnings (Harvard University Press, $21.95, 104 pp.), I save the best for last. This slim, gracious autobiography from 1983 consists of three sensibly titled sections: “Listening,” “Learning to See,” and “Finding a Voice.” But don’t look for instruction as such. With warmth and humility, Welty explains that writing starts early and perhaps without choice. A voice is heard and must be acknowledged: “In my sensory education I include my physical awareness of the word,” she writes. “A certain word, that is; the connection it has with what it stands for.” A sensibility emerges and must be nurtured: “I learned that every feeling waits upon its gesture, and I had to be prepared to recognize this moment when I saw it. These were things a story writer needed to know.” A self is revealed and must be tended. “On the train I saw [the world] passing through my window. It was when I came to see it was I who was passing that my self-centered childhood was over. But it was not until I began to write [seriously] in my twenties that I found the world out there revealing, because...memory had become attached to seeing, love had added itself to discovery, and because I recognized in my own continuing longing to keep going, the need I carried in myself to know—the apprehension, first, and then the passion, to connect myself to it.” It’s tempting, and would be easy, to go on quoting her. Spend what you will on degrees, workshops, and guides; Welty demonstrates that the best might simply have writing in their blood.