The fact that Francis of Assisi hated to be put on a pedestal does not stop us from doing so as his annual feast arrives today. He is fondly remembered for his love of animals and nature, and for his generous spirit -- all of which deserve to be honored. But, as is often the case with saints, we would do well to take Francis down from his pedestal and get to know him as the man he was rather than through his pious image. Before I began researching a book about Francis, I’d had the idea that, given his powerful sense of God’s presence, he was always carefree and happy.

The truth is more complicated: Francis’s life was encumbered by dark shadows, to the point that he experienced long periods of anguishing separation from God.

His psychological trauma began with his military service in Assisi’s war against its more powerful neighbor, Perugia. He saw men he knew since childhood torn limb from limb in a devastating battle, and was taken prisoner for a year, thrown in a dark, damp hole in the ground.

This left Francis a broken man. His earliest biographer, Thomas of Celano, indicates as much when he recounts that Francis, after his release, felt nothing when he looked at fields and mountains that once thrilled him. We can’t expect Celano to put this in modern psychological terms, but from what we now know, Francis was traumatized. He was a physical and emotional wreck, too ill and depressed to go out of the house. Some experts believe he had contracted malaria, which would return periodically for the rest of his life.

Francis tried once more to go to war, this time to help Pope Innocent III defend papal lands in southern Italy against imperial forces. Beset with the memory of his gruesome experience on the battlefield, Francis turned back, laid down his arms and, after a period of solitary prayer, began his transition to a life of voluntary poverty. This offered Francis a path to healing but a close reading of the medieval texts shows that the dark shadows in his life never disappeared completely.

For example, the Assisi Compilation, a collection of anecdotes compiled by the Franciscan order in the 1240s, quotes Francis on the “demons” that gave him sleepless nights: “If the brothers knew how many trials the demons caused me, there would not be one of them who would not have great piety and compassion for me,” he said. The account continues: “As a result, as he often said to his companions, he was unable by himself to satisfy the brothers or sometimes to show them the friendliness which the brothers desired.”

One senses that Francis felt isolated in his role as leader of a growing order -- that he felt he couldn’t be the man the other brothers wanted him to be. Clearly, he had to have been a great inspiration for the order to grow so swiftly in those years, but Francis in such moments was down on himself.

Celano recounts a prolonged spiritual depression that occurred later in Francis’s life: “At one time, a very serious temptation of spirit came upon the holy father, surely to embellish his crown. Because of it he was filled with anguish and sorrow; he afflicted and chastised his body, he prayed and wept bitterly. He was under attack in this way for several years."

Francis was filled with anguish and sorrow for several years before he could finally find tranquility. It is surprising that Thomas of Celano would write about that. The hagiographer’s task was to burnish Francis’s reputation as a saint, but such prolonged spiritual anguish would hint, at least in the medieval era, at the sin of acedia. This is one of the seven deadly sins, also called sloth. [See Thomas Baker's review of Acedia and Me, by Kathleen Norris.]

According to Thomas of Celano, Francis put great emphasis on avoiding this sin. “The devil is most delighted when he can steal the joy of spirit from a servant of God,” he quoted Francis. “He carries dust which he tries to thrown into the tiniest openings of the conscience, to dirty a clear mind and a clean life.” Celano adds: “He avoided very carefully the dangerous disease of acedia, so that when he felt even a little of it slipping into his heart, he quickly rushed to prayer. For he used to say, 'When a servant of God gets disturbed about something, as often happens, he must get up at once to pray and remain before the most High Father until he gives back to him the joy of his salvation. But if he delays, staying in sadness, that Babylonian sickness will grow and, unless scrubbed with tears, it will produce in the heart permanent rust.'"

In our enthusiasm for Francis, there is a tendency to almost divinize him. Pope Pius XI wrote in 1926, marking the seven hundredth anniversary of Francis’s death, that “there has never been anyone in whom the image of Jesus Christ...shone forth more lifelike and strikingly than in St. Francis.”

I don’t dispute that shining portrayal of Francis, but his all-too-human darkness deepens my appreciation for him and makes him all the more a model for the Christian life. From his brokenness, Francis found the insights that led him to oppose warfare, promote an alternative to the greed rampant in the church, and to identify with the poor, lepers, and other outcasts -- all those “scrubbed with tears.”

Quotations in this article are from Francis of Assisi: Early Documents (New City Press). 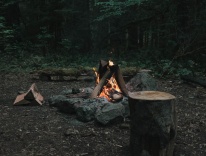