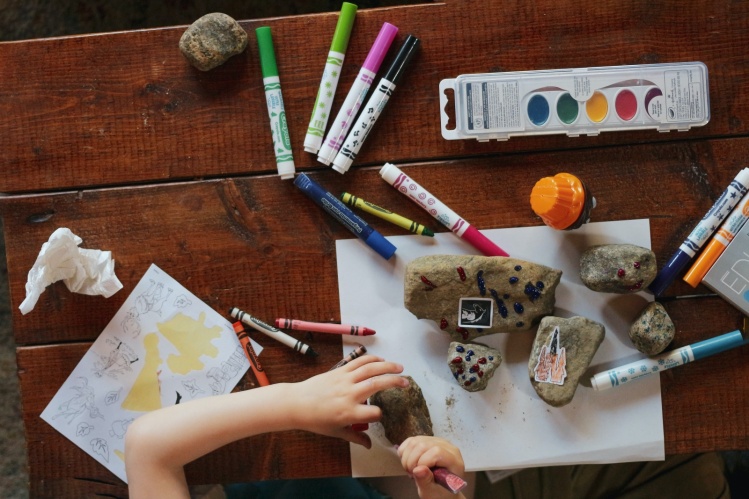 Not long ago, a friend of mine who walks his dog down our street almost every evening knocked on our door. “You know your car doors are open?” he asked. “I thought maybe I’d find you alone in the back seat, mumbling to yourself.” Since March, he’s been sending me occasional text messages to check in, wondering how my wife and I are handling the social-distancing life with our five kids—ages two to nine—in our small house.

My wife and I rushed in, and our three-year-old did, in fact, have a hole in her forehead. It was approximately the circumference of a pencil eraser, but it looked deep. My wife thought she could see part of Addie’s skull, and I freaked out. We loaded everyone into the car without putting their shoes on and sped to the children’s hospital fifteen minutes away, where one of the emergency-room docs scoffed at the possibility that my wife could see bone. Our daughter only needed a few stitches.

Still, this was one of several briefly terrifying moments we’ve experienced during quarantine. I’m not including the minor injuries, such as when our youngest managed to get his finger stuck in a vacuum and a strip of skin got sucked off. I’m talking about the kind of nauseating incident that seems, in the moment, like it could change your entire family’s trajectory.

A week or two after the ER trip, the same three-year-old stood up on one of our living-room chairs and somehow flipped herself over the back, hitting her head on the floor. From the kitchen, we heard that horrifying sound familiar to all parents—halfway between a thump and a crack—and rushed over to find her motionless on the ground, eyes glassy and unresponsive. For an agonizing fraction of a minute—twenty seconds? Forty-five seconds?—she remained limp even as we picked her up and shouted her name. But then she started crying, and half an hour later she was back to her normal, happy self, although her parents were deeply shaken. “Gotta hand it to these kids,” a doctor friend of mine said when I texted him about it. “They have pretty flexible skulls.”

You can socially isolate all you want, and you can be extremely cautious, but you can’t avoid risk, even at home. That’s the nature of being alive
sharetweet

Even as we’ve been fortunate to avoid the virus so far, these incidents have forced me to confront something that most of the time I’d rather not acknowledge: family life is always a little precarious. You can socially isolate all you want, and you can be extremely cautious, but you can’t avoid risk, even at home. That’s the nature of being alive, further intensified by having kids. Sure, a child’s skull might be mercifully flexible, but it can also make that terrible sound at a moment’s notice.

Even on injury-free days, our failures as parents sometimes dominate our quarantined hours. These are the hours full of children yelling and crying and whining and arguing, of sibling-on-sibling pushing and shoving and clawing and biting. The hours when everything in our house—a certain chair, a toy that nobody has played with in months—becomes a coveted resource that the kids fight over like global superpowers, my wife and I minor countries with very little influence. (As I write this, secluded away in our bedroom, I just heard my wife say, “Don’t bite! Don’t bite! Y’all go somewhere else. Stop wrestling in my lap!”)

One day, as the kids played in their room, we heard a child scream, “You’re not even a real ninja!” Another afternoon, one of the older kids yelled at her baby brother for eating the buttons off a calculator. We’ve been encouraging the kids to “treat others the way you want to be treated,” but at some point during quarantine, the older children took to yelling these words as a threat. They make the Golden Rule sound like a line from The Godfather.

During one particularly bitter sibling confrontation, I told my five-year-old to take a deep breath, and she yelled, “I will never take a deep breath!” At low points, this seems to be our family motto. My wife and I have struggled to take deep breaths ourselves plenty of times, losing our cool and raising our voices at the children for not listening, for endangering themselves or others, for holding down the ice maker on purpose to cover the kitchen floor with ice, for standing on the table during dinner, for intentionally smearing jelly on the couch. My kids, predictably, have not responded well to my yelling. One day, I found a small piece of paper on the floor with an X drawn over the word “Daddy.”

One of my younger kids keeps coming into my bedroom and messing with my alarm clock during the day. I’ve been woken up by a midnight alarm more than once. A few days ago while I was working in my bedroom, I noticed that they’d changed the time again, and, alone in the room, I started shouting, “STOP! MESSING! WITH! MY! CLOCK!” over and over. My wife said a delivery person dropped off a package at the front door as I was doing this, and he glanced into our window with some concern. In some ways, this has been the most exemplary moment of our socially isolated parenting experience.

Despite all the yelling and whining and arguing, our kids have actually risen to the challenge of these months.
sharetweet

And yet, despite all the yelling and whining and arguing, our kids have actually risen to the challenge of these months. Yes, they’ve eaten the buttons off our calculator and smeared jelly on our couch, but they’ve also greeted almost every quarantined day with striking reserves of enthusiasm and imagination.

That’s been our saving grace: the incredible capacity kids have for getting excited about the world. We’ve collected caterpillars and raised them inside our house, watching the little green furry things become first cocoons, then intricately winged butterflies, before releasing them back outside. We’ve watched YouTube videos about life on the International Space Station, then watched the actual space station move through the night sky above our house a few hours later. We’ve used Lynda Barry’s great book Making Comics, drawing ourselves as monsters and vegetables. The kids and I invented a serialized game of pretend in the backyard called Dragon Awaits. They want to play it every day, but I can only muster the energy to play every couple of weeks. We recently completed Dragon Awaits 5: The Last Dragon, and now they want to start a new project called the Cave of Secrets.

Most of their enthusiasm and imagination occurs without us though. They pair up, or make groups of three, or play as a quintet, with the little one mimicking whatever the big kids do, all of them pretending to be teenagers, bakers, babysitters, parents, pirates, teachers, cats, dogs, horses, knights, ninjas, giants, princesses, wizards, orphans—or siblings, even though they are siblings. Last week, the oldest boy turned to his big sister with a reflective look and said, “We always used to pretend we were beavers.”

When they’re not pretending, they’re often drawing or painting, or making cards, bookmarks, Lego Castles, and pillow forts. The older kids recently spent an entire week drawing their dream house and dream rooms, down to the most intricate details. They gave me my own third-story office, which was nice, since my actual office during quarantine has been my closet or bedroom. The next week, they decided to design their dream ranch, with a creek running through the front yard and a barn for the animals. These fantasies may be a direct result of living in a not-so-large house with four other siblings during a summer of social isolation.

Still, our kids seem to believe that even if they’re at home, they can make something new or be in a different world each day. I’m trying to adopt their perspective, with less success. The sameness of their quarantined days doesn't seem to bother them, at least not the way it sometimes bothers me. On the rare occasions when we spend most of the day away from the house, we’ll walk back through the front door and they’ll immediately start pretending or making something, as if they’re famished, craving their own creativity, eager to return to their true purpose in life.

In his book How to Be an Artist, the art critic Jerry Saltz notes that whatever else art might be, it is also “a survival strategy.” “For many artists,” Saltz writes, “making their work is as important, spiritually, as breathing or eating.” I’m realizing now that this is equally true of a child’s imaginative acts, which provide a much-needed sense of joy and control during a period that may seem bereft of both.

There’s a holiness to the creativity of children, a Godliness even: creation for the joy of creation. Yesterday, one of my kids said, “God must be so creative to make all the different things in the world.” Then they named a few of those things: birds, trees, lizards. Sometimes, if I take a deep breath and actually pay attention, I can sense the presence of God in my children’s creativity, too. Their imagination feels like a pure gift, as precious as water or air.

One of my most vital tasks now, as a parent, is to remember this. As this strange new school year begins and many parents face the prospect of shepherding our children through weeks or months of learning at home on digital screens, we can’t forget that our children also need space to pretend and be creative and engage enthusiastically with the world. Using their imagination isn’t just a way for them to pass the time; it’s a spiritual survival strategy. And it might help us survive, too.