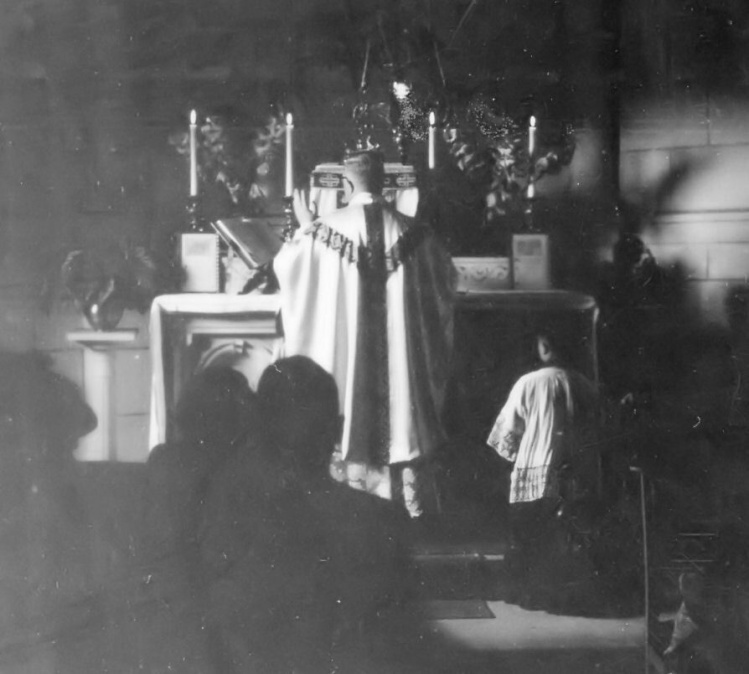 Just as many Catholic traditionalists were lamenting Rome’s new restrictions on the Tridentine Mass, I came across a prescient cri de coeur written by a Catholic priest and published anonymously in the pages of the Atlantic back in 1928. To read it is to be reminded that some things never seem to change in the Catholic Church, while other things have changed a great deal, thanks be to God.

I found the essay in Looking Back at Tomorrow: Twelve Decades of Insights from the Atlantic. Published in 1978, the collection was compiled and edited by the late Louise Desaulniers, who was a senior editor at the Atlantic in the 1970s and ’80s—and also a summertime neighbor of my family’s when I was growing up. I didn’t realize that these anthologies were “Atlantic Subscriber editions,” meaning they were never sold in stores or otherwise made available to anyone besides the magazine’s subscribers. My parents had a copy of Louise’s first anthology for years. I recently remembered it and decided to look for it online, where I discovered she had edited three books all together, the last of which was Looking Back.

I bought a copy on eBay. I was curious about which articles had been selected from the magazine’s long history. (The Atlantic was founded in 1857). Desaulniers had included early essays by Nathaniel Hawthorne, Henry James, and John Muir from the 1800s. W.E.B. DuBois, George R. Harrison and Benjamin DeMott lead the entries from the twentieth century.

But smack in the middle of the table of contents was a series of four essays titled “The Catholic Church and the Modern Mind,” signed Anonymous. Published in four issues of the Atlantic in 1928, these pieces were written by a Catholic priest and professor “at a Catholic college in the West.” The issues he raised, Desaulniers wrote, “were considered by ecclesiastical authority to be worthy of censorship at the time they were written, and yet they represented the questioning of a growing number of Catholic clergymen and they voiced the torments and traumas besetting American members of the Catholic faith.” It would be almost four decades before these issues would be discussed openly at the Second Vatican Council, whose changes are now under attack from many of the same people pouting about the new restrictions imposed by Pope Francis on the Tridentine Rite.

Back in 1928, the Tridentine Rite was, of course, the only rite Catholics in America knew, and so it’s interesting to see what the anonymous priest had to say about the Latin liturgy in his own day. “Strange, indeed,” he writes, “it is to assemble people into a church and then conduct divine services in a language which they do not understand. Why should it be so? Perhaps it has to do with the centralization of ecclesiastical power in Rome. Who knows? But to find a rational basis for the practice is beyond the most zealous protagonist.” Latin, he adds, is not the language in the East, where some twenty different languages are used in approved Catholic liturgies. The liturgy is beautiful, yet how pathetic, he notes, to hear a priest mumbling, in a strange idiom, prayers that his own parishioners cannot understand. “Likewise does he use that dead language when he anoints the sick; when he officiates at funerals; when he assists at marriage; when he administers the sacrament of penance; when he says vespers and benediction; when he offers the sacrifice of the Mass. He also trains his choir to sing this unintelligible tongue at solemn services.” (My Irish grandmother died in 1969 at the age of almost eighty. More than once my own mother told me how overjoyed my grandmother had been to finally be able to hear the Mass in English in the years just before death.)

The roots of clericalism are planted deep in the training seminarians receive.
sharetweet

But the inadequacies of Latin were just the tip of the iceberg. The anonymous priest devoted an entire essay to the inadequacy of Catholic school education at precisely the time there was a great boom in the building of new Catholic schools and churches. “Indeed the sisters, who are ninety percent of the Catholic teachers, are devoted and zealous in their work,” Anonymous writes. “There is nothing else but goodness and virtue in their penitential lives. Freely and gladly they expend themselves for the little ones of Christ. The more the pity, since they are unfitted for the work.”

Even in the 1920s, it was obvious that the nuns were charged with preparing children for a life with which the nuns themselves were unfamiliar because of their rule of life. “Those who have renounced all family ties would teach the young to become the fathers and mothers of future generations,” he writes. And the system of education they imposed “tends to depersonize [sic] the pupils—to create revulsion for religion within them.” The end result was a people self-ostracized. “Our children may not sit in the classroom with the children of the unorthodox. We must have our own schools, our own charities, our own graveyards. We are the modern Pharisees who will not sit with the publicans. We may thank our own aloofness for it. The spirit of segregation is diametrically opposed to the spirit of Christ. It was His aim to eliminate the narrowness from His people.”

He attributes much of this narrowness to the clericalism fostered by the mandatory celibacy of the clergy. Priestly celibacy is the great paradox of Catholicism, he laments. “The Church insists upon the supreme importance of family life. Her priests are exhorted to be moral patterns for the people. It is not, then, a question why priests do not marry. The great problem is, Does a bachelor priesthood fit into the scheme of the modern world? Not only the lay mind, but that of many a cleric, pauses to reflect upon this grave issue.” While pointing out how little support for mandatory celibacy is actually found in the Gospels or the early Church, he notes, “Be that as it may, the rule of celibacy is taught in all its force today.”

The roots of clericalism are planted deep in the training seminarians receive. “Always the priesthood is glorified. The students must listen daily to pious discourses on the high dignity to which they aspire. From this continual preachment a peculiar psychology is developed in them. They become jealous of the high honors for which they are being groomed. They feel constrained to become champions of the priestly dignity. They grow impatient when confronted with the opinions of those who have not been trained in the sacred science. In this frame of mind they go out into the modern world to become leaders of men.”

Nowhere is the inadequacy of seminary training more pronounced, he believes, than in the confessional when the priest is faced with the struggles of married couples. There he is expected to pass judgment on the most intimate relations of connubial life. “Of this he knows nothing save that which he has read in his ancient textbooks. He, a celibate, must solve the intricate problems of sex.”

Even if he wants to, a priest cannot recommend to his parishioners that they think for themselves about what the Pope John XXIII would later call “the signs of the times.” “Though a heart of gold beat in his bosom, [the priest] must still stand before his people in the guise of a medieval pedagogue. To be true to his trust he must be a reactionary. He must preach and interpret the teachings of Christ according to the minds of men who never dreamed of an age or a country like this in which we live. His every public expression must conform to the minds of those savants, mostly Italian, who have grouped themselves about the Vatican.”

According to Anonymous, the utter lack of participation or engagement on the part of the people in the pews inevitably leads to moral and spiritual ossification. “Self delusion is pathetic in its relation to the individual and tragic when it entails such consequences to the human race. The fact is that the Catholic Church has never sought to develop intelligent faith. The Church has never encouraged religious thought in the individual Catholic. She demands abject intellectual submission to her teachings. Alleged explanations of doctrine are nothing else than controversial arguments. These too are to be accepted in the humility of obedience due to authority. The intellectual coercion practiced in the Church today is just as debasing to human dignity as was the physical coercion which the Church practiced in the Middle Ages.”

In the end, the priest warns, if the bishops are to “convert America to the faith,” they must first return to the ancient Christian emphasis on virtuous behavior rather than adherence to ritual formalism. “They must rear a people distinguished by the virtue of their lives. Attendance at Mass and reception of the Sacraments are salutary practices, according to our belief. Yet they do not impress the outside world. Men to-day are not deceived by the crowds that frequent our churches. There is but one quality that proves the excellence of a religion. It is the excellence of the lives lived by its devotees. When the American bishops cease their school-building crusade and begin the work of developing Christian character, there will be hope for the Church in America.”

As bleak as things looked to the good father back in 1928, I find his words now inspiring, precisely because they come from an era that today’s reactionaries yearn to return to, blind as they are to the deficiencies of the religious formalism they idolize. This contemporaneous account of that era reminds us just how important the reforms of the past hundred years have been to ordinary Catholics.