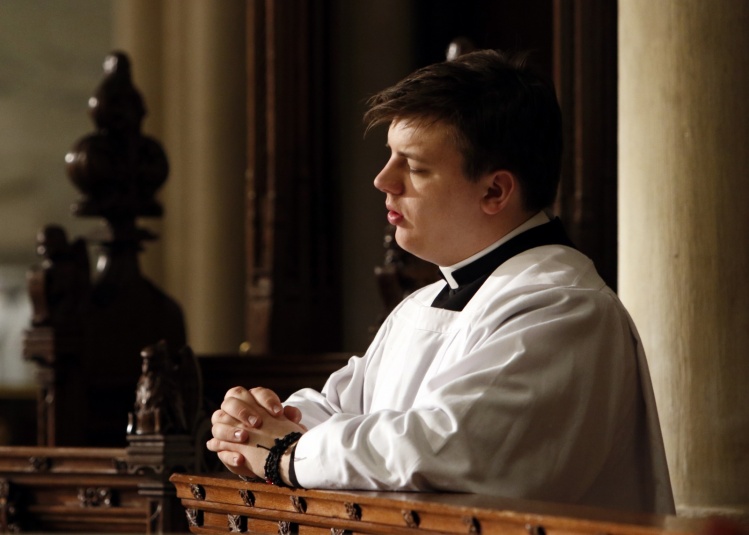 Many symbols of Catholicism have changed, receded, or even disappeared, to be replaced by others. But not the Catholic priest. The church’s presence in education, culture, and social work may not be as visible as it once was, but the priest’s role remains conspicuous. When most people think of Catholicism, they still think of a man in a Roman collar.

A seminar sponsored by Boston College that ran from September 2016 until the summer of 2018 has produced an interesting document on priesthood and ministry, with a noteworthy set of proposals on the formation of future priests. The document, published in the last 2018 issue of Origins, is titled “To Serve the People of God: Renewing the Conversation on Priesthood and Ministry.” The group that produced it includes men and women, lay and ordained Catholics, scholars and pastoral ministers. It was chaired by Richard Gaillardetz of the Boston College theology department and Thomas Groome and Richard Lennan of the School of Theology and Ministry at Boston College.

The introduction of the nine-thousand-word document makes clear that the focus is on the formation of diocesan priests, not members of religious orders or new ecclesial movements such as the Neocatechumenal Way. The focus is also on the United States: the authors acknowledge that some of their proposals may not be applicable to other countries.

The document’s first part, “Ministry in the Life of the Church,” addresses the ecclesiological foundations of ministry in the life of the church—the sacramentality of the church and the ecclesial nature of all its ministries. The second part is devoted to “A Profile of the Well-Formed Priest,” presenting the priest in all his aspects: as a preacher, as leader of worship and prayer, as collaborative leader, as public representative of the church, and as practitioner of pastoral charity.

Today, one can find as much clericalism among some post-Enlightenment and anti-Vatican II laity as among the clergy themselves.
sharetweet

The third part, “Shaping the Future,” is about the recruitment and formation of priests. It’s the most interesting part because it develops concrete proposals. Addressing the future of diocesan seminaries, the document states that “the enclosed setting of the seminary, often insulated from the everyday world of families…can isolate seminarians.” Echoing what Pope Francis has said many times, the document encourages dioceses to resist “the pressure to increase numbers by accepting seminarians indiscriminately.” It also warns formators of the dangers of “forms of piety that tend toward a disembodied ‘perfection’ or neglect engagement with the world.” It encourages them to address the need for future priests to have “the capacity of relationship with a variety of women and men.” A good clerical formation must support affective maturity and psychosexual development, and it “must directly promote alternatives to ‘the celibate cloak of silence.’” The document also recommends that formation not be the responsibility of only the ordained, and that seminarians be trained alongside those who are preparing for other ecclesial ministries. The final part of “Shaping the Future” addresses the issues of ongoing formation, the new environment of ministry (not a good one for “lone rangers”), and the need to be open to future developments in the discipline of ministry: “The church’s ordained ministry has a history precisely because it has changed over time. This fact suggests that further change can be expected as the future unfolds.”

Overall, the Boston College document has two major emphases. The first is the need to see ministry as a collaborative enterprise between priests and other ministers, not just because of the obvious problems caused by a shortage of priests, but also for theological reasons: the authors stress the ecclesial nature of all ministries. The distinction between ordained and unordained ministry should not be misunderstood as the distinction between the professional and the amateur. The second emphasis is on the need to rethink our approaches to formation, to get beyond the monolithic seminary—an innovation of the Council of Trent that has persisted without much adjustment for more than four hundred years.

It is difficult to rethink priestly formation today without considering recent controversies in the “theology of the laity.” Today, one can find as much clericalism among some post-Enlightenment and anti-Vatican II laity as among the clergy themselves. The BC document’s theology of the laity is mostly implicit. It seems to take for granted that lay ministry works in collaboration with ordained ministry, not as a substitute for it. But it also implies that there is now a mature, educated Catholic laity who are no longer willing to be considered naturally inferior to the clergy.

This Boston College document also reflects the atmosphere of intra-ecclesial division in which debates about the priesthood now take place. When the authors write in the introduction that a “consensus fidelium does not exist” with respect to the ordination of women or married men, they are merely telling the truth. It may take a long time for such a consensus to emerge. Of course, there was a long tradition of married priests in the early centuries of the church (as there still is in the Eastern and Oriental Catholic Churches), but how many ordinary Catholics know that today?

“To Serve the People of God” insists on the need for Catholics to talk about a transformation that is already underway. In the past few decades there has been a redistribution of leadership roles involving the permanent diaconate restored by Vatican II, new male and female lay ministries, and the new “ecclesial movements,” where the distinction between lay and ordained members is much less relevant. But this redistribution of power is taking place in the absence of a real magisterial development of teaching about ministry in the church. A pluralism of ministries and ministerial figures was developed largely extra legem—that is, without comprehensive theological and juridical regulation. To its credit, Rome did not want to limit the action of the Spirit, so it left plenty of room for experiment. But many of these new ministries came about as a result of the emergency shortage of clergy. Note that this was possible only where local churches had the financial resources to hire lay personnel (male and female) for positions of pastoral care that had previously been entrusted exclusively to the clergy. Poor churches simply can’t afford to do that—or at least not in the same way. At a larger scale, bishops in rich parts of the world, lacking a sufficient number of homegrown priests, now import clergy from poor countries that seem to have a surplus, at least compared to us. Results may vary, but even when this works well, it poses a moral questions concerning the relationship between the church in the rich countries of the West and the church in the developing world. It can look like just another form of resource extraction.

The history of the church can be seen as a history of reforms of the clergy: the enforcement of clerical celibacy in the Roman Catholic Church was a centuries-long struggle; it took decades to build and staff diocesan seminaries after Trent. We have no reason to doubt that a new reform of clerical formation will take many years to implement. Which makes it all the more important that we start now. Both the clerical abuse scandal and the shortage of priests in the West require the post-Vatican II Church to address an issue that Vatican II never focused on: the selection and formation of priests. Vatican II elevated the episcopacy (at least in theory) to collegiality with the pope, and called the laity to holiness and a much more active role in both the church and in the world. But the lower clergy were left stuck in the middle as a kind of afterthought. (It is worth remembering that it wasn’t until the third session of the council, in 1964, that fifty parish priests were invited to attend—and then only as “auditors.” They were much less visible than the ecumenical observers and even the lay guests.)

The Boston College document is a valuable reminder of the church’s urgent need to reexamine the way it prepares its ministers. Because ministry is itself collaborative, this reexamination of the future of ministry must also be collaborative, involving representatives of the lower clergy and laity as well as the bishops. A synod—by definition a kind of collaboration—would be the ideal way to deal with this important and neglected issue.