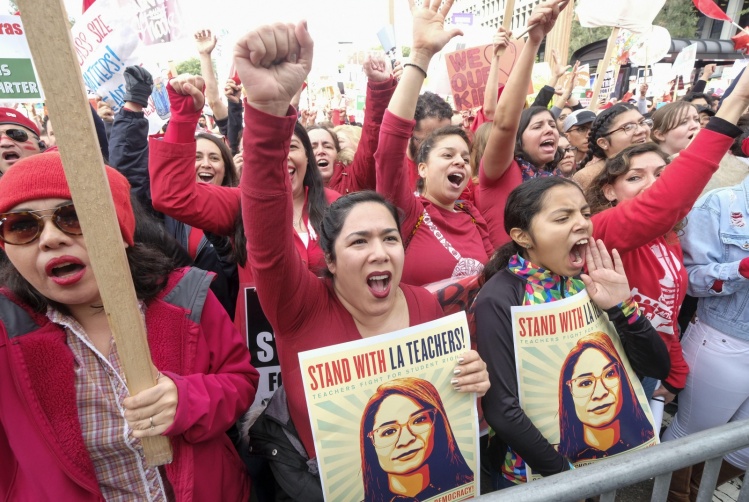 The recently settled strike by thirty thousand Los Angeles public-school teachers offers a timely reminder of what organized labor can achieve with a well-planned and well-executed work stoppage. Union leaders began preparations about two years ago, and when teachers walked off the job in mid-January there was a clear strategy in place for articulating their demands. These included pay raises of 6 percent, smaller class sizes, and greater funding for support staff and other resources. All of those demands were accepted in the tentative deal reached with the city six days later.

The Los Angeles strike was the latest in a series of successful teacher walkouts, following strikes in West Virginia, Oklahoma, and elsewhere. Like teachers in those states, the Los Angeles strikers had widespread public support, underscoring the reality that Americans by and large have a positive view of both teachers and organized labor. But unlike the 2018 “red-state rebellion,” in which grassroots activism fueled strikes against Republican governments openly hostile to organized labor, the Los Angeles teachers’ strike unfolded as a traditional, union-led effort in a progressive, Democratic city in the bluest (and wealthiest) state in the nation. California’s public schools have been chronically underfunded since the infamous passage in 1978 of Proposition 13, which cut and capped the property taxes that used to support them. A recent study shows that spending for low-income districts falls 47 percent below the baseline established by the state itself. While there has been talk of raising the limit on corporate property taxes to help fund schools, so far no official proposal has been made. Property taxes remain the third rail of politics in California—home to the highest concentration of billionaires on the planet—and the Los Angeles strike isn’t likely to change that reality.

The righteous struggle for public education must now continue on other fronts.
sharetweet

The unique demographic makeup of the Los Angeles public-school system was another significant aspect of the strike. In the United States as a whole, more than half of public-school students are children of color, while more than 80 percent of teachers are white. But in Los Angeles, not only are a majority (73 percent) of students Latino, but so is a plurality (43 percent) of the teaching force. In no other large system where students of color predominate is the faculty so reflective of kids in the classroom. Striking teachers stressed the sense of solidarity they have with their students, a dynamic strengthened by the fact that many faculty are themselves products of the public-school system and are still dealing as teachers with the same problems they faced as students—from a shortage of nurses and English-language instruction to leaky roofs and understocked libraries. For some teachers, their activism was further fueled and informed by having participated in student walkouts protesting Proposition 187, a 1994 state ballot initiative that would have banned undocumented people from receiving education and healthcare benefits. Many said they were striking less to secure their own livelihoods than to improve the welfare of their long-neglected students, 80 percent of whom are from low-income families.

Teachers and other supporters of traditional public education have also criticized California’s heedless embrace of the charter-school model. More than 600,000 students are now enrolled in charters statewide; in Los Angeles, the largest authorizer of charters in the nation, there are about 150,000 charter students. Studies estimate that charters cost the Los Angeles school district about $500 million a year, and that traditional public schools lose nearly $5,000 in state funds for every student who leaves for a charter school. During the strike, Alex Caputo-Pearl, president of United Teachers of Los Angeles, called for the city to “back away from what corporate Democrats have been promoting for a long time, which is charter schools and privatization.” The union, long adamant in demands for better regulation of charters and a cap on their growth, won a concession from the board to consider a resolution on the issue. But it’s hard to see much else happening soon. Charter-school operators and advocates dominate the Los Angeles school board, after wealthy charter backers spent more than $9 billion in the 2017 election to wrest control of it from the union.