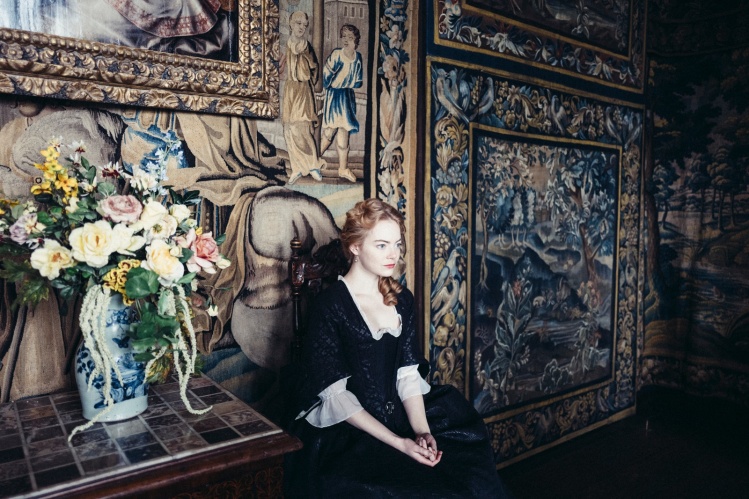 Yorgos Lanthimos’s The Favourite is a brilliant dark comedy, but in its extravagance and emotional sprawl also the kind of film that can be viewed in different ways.

On its surface: as a period drama of 18th-century royal intrigue. Indeed, the palatial sets and sumptuous costume design give the audience much to look at, while the film’s plot ostensibly revolves around the brief and tempestuous reign of the last Stuart monarch, Queen Anne (a superb Olivia Coleman). But The Favourite—which has been nominated for ten Oscars—sports its powdered wigs and corseted gowns with an almost salacious wink, and certain deliberate anachronisms of speech, dance, and other behaviors remind us that this is no scrupulous biopic. And the political machinations serve as merely the backdrop for more interesting psychological and sexual ones, namely those of Sarah, Duchess of Marlborough (Rachel Weisz), the queen’s trusted confidante and lover, and Sarah’s younger rival, Abigail (Emma Stone).

Or: as “a study of unbridled ambition and ruthless power,” as John Anderson writes in America. It does not take long for Sarah to work out that Abigail, a canny but desperate cousin of hers eager to carve out a life of comfort in the royal court, is challenging her position as the queen’s “favourite.” To its credit, the movie doesn’t waste time coyly building up the conflict between the two women, opting instead to commence the cat-and-mouse game early and let it barrel on with enthusiasm. A scene in which Sarah and Abigail practice their shooting together features some of the film’s most deliciously biting dialogue; are the rifles in their hands or the words in their mouths the more dangerous weapons? Anne, addled by illness and grief but basking in the attention, keeps the game going by shrewdly shifting her favor between the two women. But ultimately Lanthimos isn’t as interested in “ruthless power” itself—how power is gained—as he is in what happens once a person suddenly possesses it. One of the real insights of the film is identifying the challenges that come with that power. Deploying it requires a demanding mix of skills, sympathy, and sacrifice — a constantly frustrating dance.

The film seems to be telling us that power is never held securely—that in fact those who wield it are constrained as much as those whom they wield it against.
sharetweet

This “powerlessness” of power asserts itself, for instance, whenever Anne attempts to make a decision. At court she is caught between Tory and Whig factions that disagree on how best to carry out war with the French. For guidance she turns to Sarah, whose force of character and clear-eyed political commitments often carry the day. But then, the imagined slight or the whiff of disloyalty from Sarah quickly sends Anne into apoplexy, and she reverses decisions she has just solemnly pronounced. This in turn sends the lords and ladies of the court scurrying to adjust their schemes, subtly and less so. Abigail, for instance, is able to increase her standing with a well-timed clearing of the throat; the foppish Lord Harley (Nicholas Hoult) prefers pushing ladies into ditches to make his point. Considering that Anne would have been empowered to rule by the supposed divine right of kings, the drama that surrounds her decision-making is mundane in the extreme. The film seems to be telling us, within a time and place chosen to underline the point, that power is never held securely—that in fact those who wield it are constrained as much as those whom they wield it against.

This is certainly the lesson Abigail comes to discover as she climbs ever-more confidently up the ladder, eventually winning a decisive advantage over Sarah. In a moment of triumph—evicting Sarah from her lavish apartment and claiming it for herself—Abigail gives in to gloating. Sarah is taken aback: “We really are playing at different games, aren’t we?” she asks. Abigail looks confused but still smug, until much later, when in a moment of realization she sees quite clearly that she has doomed herself to the logic of power. If the film has a hero, it is Sarah, who plays her game for the sake of larger things—for England, for honor, for a genuine love of Anne, however deflated by exasperation such love might be. Sarah is not simply interested in power, but in wielding power ably and toward proper ends. In Abigail, however, there is only animal cunning and acquisitiveness, betrayed by Stone’s wide bright eyes.

Speaking of animals, Lanthimos again shows his interest in critters with one of the film’s most important visual touchstones: Anne’s collection of pet rabbits (Dogtooth and The Lobster also featured animals prominently). In one disarmingly raw moment we learn that each of the seventeen pets represents for her one of the seventeen children she’s lost through the years, either to stillbirth or death in infancy. (It is indeed historical fact that Anne suffered these losses; Lanthimos adds the rabbits to provide dramatic representation.) We come to see that Anne’s capriciousness, her mercurial rages, her overriding desire to be wanted all stem from a most profound grief that she’s nursed far longer than she ever did any child. Set next to her bed, her rabbits are the first thing the aging queen sees each morning, their squeaks the last thing she hears each night. They are for her the embodiment of everything that’s been taken from her, despite all she has; they are the weak creatures that exert much control over this singularly powerful woman.

This is necessary to understand the film’s true intentions. One feels that if Lanthimos wanted merely to depict a power-hungry ruler subject to childish flights of fancy, he wouldn’t need to cast his mind all the way back to the early 1700s. Rather, this movie is an extended reflection on the strange and supple operations of affection, jealousy, and, indeed, trauma. In this sense, Abigail and Sarah represent the two incompatible impulses available to a woman like Anne. That the film ends with Abigail’s crushing realization of her own undoing is also an opportunity to reflect on Anne’s defeat, in a sense, inasmuch as she’s allowed herself to be subject to the grasping, insecure logic of power that so determines Abigail’s life. I said above that if the film has a hero it’s Sarah; though she finds herself stained (indeed, scarred) by the dirty business of statecraft, she always intended to relate to Anne in love. Equally, if the film has a victim, it’s Anne herself, since, after Sarah’s departure, she finds herself unable or unwilling to know what love is.

It is love more than power, then, that Lanthimos is really interested in. “Love has limits,” Sarah tells Anne early in the film. “It should not,” is the queen’s prompt reply. But this instinct toward limitlessness is precisely what must be overcome in love. One must practice love—must show it, prove it, purify it. One must, in other words, constrain love. Otherwise it degenerates into mere favor, which, as we’re told by one of Anne’s more self-aware toadies, “is a breeze that shifts directions all the time.”