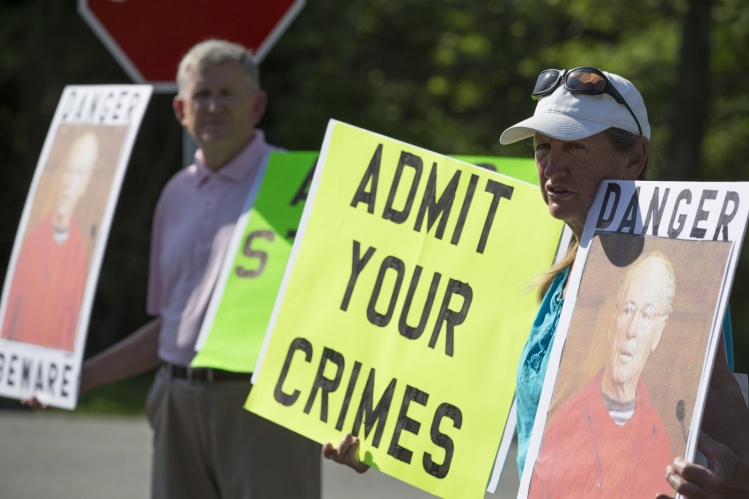 Protesters speak to television reporters while holding signs "Admit your crimes" in protest of the release of former priest Paul R. Shanley from prison July 28 in Bridgewater, Mass. Shanley, a major figure in the U.S. church's child sex abuse scandal, was sentenced to 12 to 15 years in prison in 2005 on multiple counts of raping and assaulting a boy in the 1980s. (CNS photo/CJ Gunther, EPA)

Shortly after my column on Pope Francis’s latest appointment of new cardinals went to press (“Cardinal Virtues” June 13, 2017), I learned that a scandal had broken out concerning one of them. Cardinal-elect Jean Zerbo of Mali was accused by two investigative journalists of embezzling five million euros and hiding the money in a Swiss bank account. He and representatives of his diocese denied the charges in a clumsy, disorganized, and blustering manner.

When I read about this, I immediately assumed he was guilty.

I noted my gut reaction with chagrin, but there it was. So pervasive has clerical scandal been in my lifetime, including cases of mismanagement of church funds, it was only too easy to believe him guilty. Easier, in fact, than to imagine he was innocent. And I had just finished praising these cardinals as men of integrity who exhibited virtue! I felt cheated, taken in. I had trusted too much in the glowing reports I had read. I ought to have been more cynical.

Reactions such as this to news of scandal in the Church are, I believe, not uncommon. And a spiritual toll is taken by this sort of inner response. In the aggregate, feelings of being cheated and taken in by our own leaders can make us more defensive and less generous.

It is part of the total harm caused by scandal in the Church—particularly the sex abuse scandal, but other scandals as well. The cost of scandal cannot be measured only in the number of dioceses driven into bankruptcy, or the number of lawsuits taken to court, or the price of compensation to victims, or even the number of individuals and families and institutions directly harmed. The cost is found also, somewhat more intangibly yet in a real way, in the shifting of the inner pendulum of so many Catholics from trust to skepticism, from a presumption of innocence to a presumption of guilt.

I am not talking here about the loss of naïve optimism, or the experience of taking clergy down off the pedestal. Such things are part of growing up. If we take our theology seriously, we must acknowledge that sin is real and human beings fail us. The Church has always included both saints and sinners. Indeed no one among us is sinless. What I think has been happening, however, is different from a loss of naïveté or growth in a mature acceptance of human failings.

Something good in our souls is being eroded whenever, in place of fairness, we take refuge in cynicism. This is one of the less-admitted costs of scandal. Even with all the good we have known from, yes, virtuous people in the Church, we cannot forget the ugliness of betrayal displayed in clerical crimes and cover-ups. It has been burned into our memory and left us scarred.

The natural human reaction is to protect ourselves from those who could do us harm. And so we withdraw—we withhold our trust, we withhold our money from the collection plate, and perhaps our bodies from the pews. This reaction has been provoked by so much truly bad news in recent years that I think it has moved us collectively to a new place. For some, it has moved them straight out of the body corporate. For those who stay, it has given us harder hearts.

Something good in our souls is being eroded whenever, in place of fairness, we take refuge in cynicism.
sharetweet

People tend to think of scandal as any public embarrassment that results from misbehavior. It’s a term of art for public relations, as people and institutions seek to “manage” scandal.

But the Catechism of the Catholic Church has a more exacting definition: “Scandal is an attitude or behavior which leads another to do evil” (CCC 2284). Far from being merely a misdeed held up for public opprobrium, a shocker, or a public relations nightmare to be managed, a scandal is specifically a wrongdoing which causes another to stumble and fall. The Greek word “scandalon” from which our English word scandal is derived means a snare of an enemy.

So what evils are incited in others by scandal in the Church? Clerical scandals cause terrible harm, of course, to their direct victims. They are also intertwined with evils of clerical privilege, cover-ups, and winking which are offenses against justice and truth. Scandalous behavior among the clergy sets a terrible example to other clergy. Those who observe crimes among their peers may derive from it the harmful lesson that their own defalcations or sexual acting-out are “not so bad.”

But there is another arena of harm here, especially for the laity and most especially for those who are never tempted to act in like manner to those who have abused their power in the Church. It consists of the temptation to despair of the Church as a whole because of such wrongdoing, and to substitute cynicism for fairness.

As I dug through the online reports concerning the alleged financial improprieties of Cardinal-elect Zerbo, I discovered gaps in the story. The Malian journalists’ original report was sensationalistic and hostile. They had conducted an ambush interview by sneaking into a church and confronting Archbishop Zerbo after Mass. His flustered and incoherent responses were held up as evidence of guilt. The French journal Le Monde was cited in the (few) Italian and American news outlets that carried the story, but the story itself appeared only in the African edition. No evidentiary documents were published. The story had no further corroboration. Tellingly, the Malian government took no action for tax evasion either, even though the sum involved would have been significant. The more I read, the more dubious it seemed.

After their initial confused and clumsy denials, the Malian diocesan officials refused to talk to journalists. They said they would make their responses only to the proper authorities. America magazine reported that Vatican sources did receive information about this and were satisfied with the results. The elevation of Zerbo to the cardinalate went ahead. Yet Zerbo arrived in Rome so ill that he could not take the first place, which he ought to have had, because he could not speak.

What really happened? What was behind the journalists’ story? The truth is, we just don’t know. But we do know this: if every time we hear a story of wrongdoing in the Church we credit it because we’ve been conditioned to expect the worst, we’ve lost something—not our innocence, but our resistance to cynicism.

Cynicism is a form of evil. It has to be resisted, not by mindless optimism or a Pollyanna-like confidence that “everything will turn out fine,” but by a determined effort to be fair.