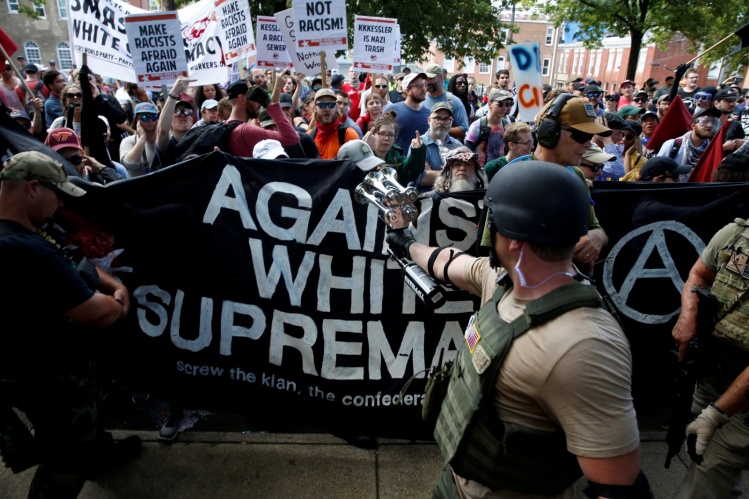 Those of us who are white regularly insist that the racists and bigots are a minority of us and that the white-power movement is a marginal and demented faction.

This is true, and the mayhem in Charlottesville, Virginia, called forth passionate condemnations of blood-and-soil nationalism across the spectrum of ideology. These forms of witness were a necessary defense of the American idea and underscored the shamefulness of Trump’s embrace of moral equivalence. There are not, as Trump insisted Saturday, “many sides” to questions that were settled long ago: Racism, anti-Semitism, discrimination and white supremacy are unequivocally wrong.

A president who cannot bring himself to say this immediately and unequivocally squanders any claim to moral leadership.

Advisers to the president tried to clean up after this moral failure, putting out a statement Sunday morning—attributed to no one—declaring that “of course” his condemnation of violence “includes white supremacists, KKK, neo-Nazi and all extremist groups.” But if that “of course” is sincere, why didn’t Trump say these things in the first place? And why hang on to the president’s inexcusable moral equivalence by adding that phrase “and all extremist groups”? This was simply a weak philosophical cover-up for a politician who has shown us his real instincts throughout his public life, from his birtherism to his reluctance to turn away 2016 endorsements from Klansmen and other racists.

More Republicans than usual broke with Trump after his anemic response, and Sen. Orrin Hatch, R-Utah, was especially poignant in offering historical perspective on this episode: “My brother didn’t give his life fighting Hitler for Nazi ideas to go unchallenged here at home.”

But that so many others in the party preferred to keep their discomfort on background was itself a scandal. “I can’t tell you how sick & tired I am of the ’privately wincing’ Republicans,” Peter Wehner, a veteran of three Republican administrations, tweeted. “It’s a self-incriminating silence.” Yes, it is.

The proper response is for Democrats and Republicans willing to take a stand to force a vote in Congress condemning the president for his opportunistic obtuseness and making clear where the vast majority of Americans stand on white supremacy. This is important for many reasons, but especially to send a message to America’s minorities that whites are willing to do more than offer rote condemnations of racism.

For make no mistake: No matter how accurate it is to say that neo-Nazis and Klansmen represent a repugnant fringe, the fact that our president has consistently and successfully exploited white racial resentment cannot help but be taken by citizens of color as a sign of racism’s stubborn durability.

The backlash to racial progress is an old American story, from the end of Reconstruction forward.
sharetweet

The backlash to racial progress is an old American story, from the end of Reconstruction forward. The Rev. Martin Luther King Jr.’s words from 1967 speak to us still: “Loose and easy language about equality, resonant resolutions about brotherhood fall pleasantly on the ear, but for the Negro, there is a credibility gap he cannot overlook. He remembers that with each modest advance the white population promptly raises the argument that the Negro has come far enough. Each step forward accents an ever-present tendency to backlash.” This is what we saw this weekend.

The battles over Confederate monuments, in Charlottesville and elsewhere, reflect our difficulty in acknowledging that these memorials are less historical markers than political statements. Many were erected explicitly in support of Jim Crow and implicitly to deny the truth that the Southern cause in the Civil War was built around a defense of slavery. Taking them down is an acknowledgement of what history teaches, not an eradication of the past.

But history is also being made now. As is always true with Trump, self-interest is the most efficient explanation for his actions: Under pressure from the Russia investigation, he is reluctant to alienate backlash voters, who are among his most loyal supporters.

The rest of us, however, have a larger obligation to our country and to racial justice. As the late civil rights activist Fannie Lou Hamer might suggest, it is time to ask about Trump: When will we become sick and tired of being sick and tired?